Please ensure Javascript is enabled for purposes of website accessibility
Log In Help Join The Motley Fool
Free Article Join Over 1 Million Premium Members And Get More In-Depth Stock Guidance and Research
By George Budwell - Dec 18, 2017 at 10:00AM

If you're looking for outstanding growth vehicles to own next year, these three biotech stocks are worth checking out.

With U.S. stocks at all-times highs, it can be a serious challenge to find growth vehicles that are still worth buying at these levels. To do so, I think investors may want to try to mine the depths of the small-cap biotechnology space to unearth compelling bargains. Some of these stocks, after all, are nearing pivotal catalysts that could drive their shares much higher next year and beyond. 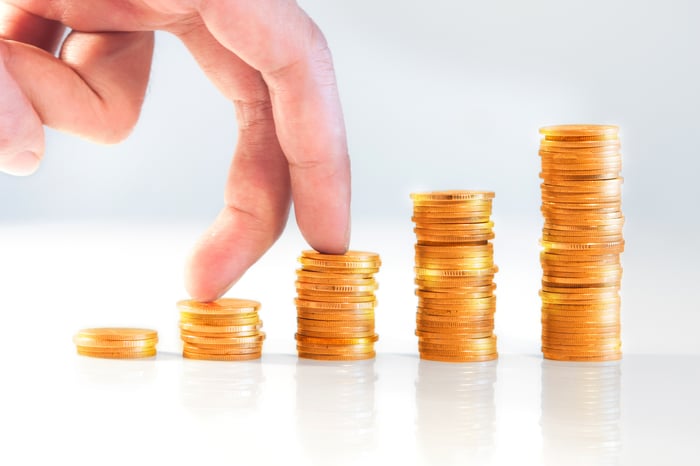 Amarin is a small-cap biotech with one Food and Drug Administration-approved drug: a highly refined prescription fish oil pill called Vascepa. And the drugmaker's stock is a potential buy for two reasons. First off, Vascepa's sales have grown substantially since its commercial launch in 2013, and that momentum is showing no signs of slowing down in 2018. The average analyst estimate, for instance, has Vascepa's sales rising by another 53% next year. That figure implies that Amarin's shares are only trading at 3.4 times its 2018 revenue estimate, which is relatively low for a promising, early commercial-stage biotech.

The second reason is that Amarin will finally announce the top-line results of its large cardiovascular outcomes trial for Vascepa sometime in the third quarter of 2018. This trial, known as REDUCE-IT, could catapult Vascepa into a far larger target market includes patients with moderately elevated triglyceride levels, despite being on statin therapy. That's a multibillion-dollar-a-year commercial opportunity.

In the same breath, Amarin's stock could suffer in a big way if REDUCE-IT misses the mark. But the drugmaker's heady upside potential arguably warrants a deeper dive by investors comfortable with risk.

Novavax is trying to claw its way back from the brink

Novavax, a synthetic vaccine maker, has also given investors two clear-cut reasons to consider owning its stock in 2018. Up first, Novavax is expecting to unveil interim data for its late-stage respiratory syncytial virus (RSV) study in pregnant women next year. If successful, the company's experimental RSV F vaccine could become part of the standard of care for expecting mothers in the United States, and perhaps even abroad. That's a rather large and lucrative market opportunity, to put it mildly.

Novavax is also making strides with its experimental NanoFlu vaccine that it hopes can displace the current standard of care. Although the company's efforts in this area are still in the early-stage phase, an effective flu vaccine could be worth up to $3 billion per year in sales, according to Research and Markets. Stated simply, this small-cap vaccine maker is targeting two blockbuster opportunities in the clinic right now.

The downside is that Novavax desperately needs fresh sources of capital soon to advance its clinical activities in RSV and flu, and there's also no guarantee either of these product candidates will become commercially available. Thus, it might not be a good idea to go hog wild with this low-priced equity right now.

Dynavax's stock has gained a jaw-dropping 387% this year, thanks to the unexpected regulatory approval of its hepatitis B vaccine, Heplisav-B. While a fair number of biotechs tend to overshoot their near-term value projections following key regulatory approvals, Dynavax is arguably still a great value buy.

As the only two-dose hepatitis B vaccine for adults that also sports a superior efficacy profile to GlaxoSmithKline's Engerix-B, Dynavax should be able to easily gobble up the lion's share of this market moving forward. Heplisav-B should thus generate upwards of $700 million to $800 million per year in annual sales within a few years time.

So why is Dynavax stock trading at less than twice Heplisav-B's peak sales potential? The underlying reasons are that Dynavax doesn't have any experience handling a commercial launch, and the company will also need to tap the public markets next year to fund Heplisav-B's commercialization. In other words, Dynavax is in "prove-it" mode as it transitions into a commercial-stage entity. That said, this biotech stock should post some impressive levels of top-line growth in the years ahead, making it a worthwhile pick for patient investors.