Please ensure Javascript is enabled for purposes of website accessibility
Log In Help Join The Motley Fool
Free Article Join Over 1 Million Premium Members And Get More In-Depth Stock Guidance and Research
By Dan Caplinger - Dec 18, 2017 at 8:54AM

Altria Group (MO -0.16%) has been one of the strongest-performing stocks of all time, defying numerous challenges to its business model and still coming out on top. Lucrative dividends have combined with share-price advances to produce solid returns for long-term shareholders. Yet even Altria can't produce amazing results every single year, and 2017 has seen a couple of new potential roadblocks emerge that limited the stock's gains.

As 2018 approaches, now's a good time to take a look back at Altria to see what happened to the cigarette giant over the past year. By understanding the factors affecting Altria's stock, investors can better decide whether the future will bring better times for the company. 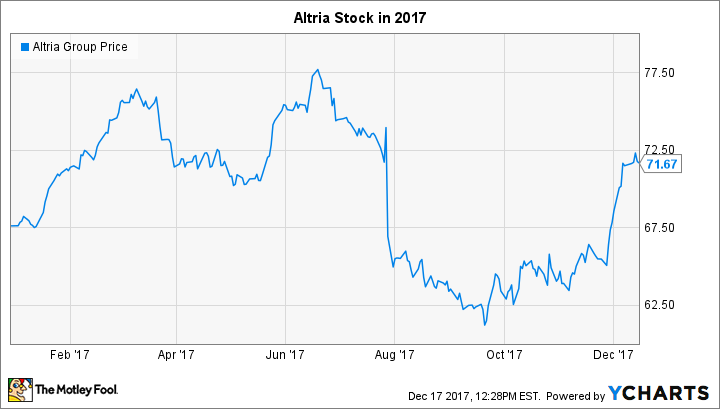 How Altria initially saw 2017 shaping up

Altria started the year with a sluggish financial report that set the stage for ramping down expectations after a strong 2016. The tobacco giant was able to generate only a 0.1% rise in revenue net of excise taxes to finish its 2016 year, and its earnings guidance for 2017 predicted growth of just 7.5% to 9.5%. That's in line with where the company has typically tried to have earnings growth, but it was less than the 10% rise that most investors were hoping Altria could manage in 2017.

The company's first-quarter earnings report in May seemed to bear out the difficulties that some had foreseen. Net income was higher by 15%, but cigarette shipment volumes were down almost 3% compared to the prior year's first quarter, and losses in retail market share both for the company's key Marlboro brand and for its overall cigarette business revealed the impact of heightened competition for customers. Moreover, an early year recall in Altria's smokeless tobacco unit cause short-term hits that weighed on overall performance.

A bigger threat at midyear

By midyear, things looked somewhat better for Altria's business. Revenue growth in the second quarter accelerated to 4%, and the company managed to overcome a big boost in cigarette taxes in the key California market to produce higher revenue despite ongoing volume and market-share declines.

Yet the U.S. Food and Drug Administration put a big wrinkle in Altria's prospects by proposing new regulatory efforts. The FDA said it would seek to regulate the amount of nicotine that cigarette manufacturers put in their products, with an eye toward reducing nicotine levels to near or below the threshold for addiction. That news sent Altria stock plunging, falling below where it started the year and wiping out double-digit percentage gains for the stock near midyear.

As so often happens, though, Altria's stock didn't stay down for long. Despite third-quarter revenue that was actually down from year-earlier levels, the tobacco giant still managed to carve out impressive gains in its bottom line, reassuring shareholders that its essential business model remains intact.

One key source of hope for investors looking for new growth drivers has come from the reduced-risk product category. Altria's MarkTen has done a good job with its e-vapor product, expanding its retail presence and reaching 13.5% market share by the third quarter of 2017. An even bigger victory could come if the FDA approves the iQOS heated tobacco system for use in the U.S. market, because Altria will have the exclusive rights to license iQOS for sale domestically. The success of iQOS in foreign markets, especially Japan, shows the potential that the reduced-risk product has for the cigarette market in the U.S. if Altria can win a favorable regulatory outcome.

Looking ahead, Altria's key question is how regulation will affect its business. On one hand, complying with new nicotine-content requirements could require a fundamental shift in the way that Altria produces cigarettes, and it's unclear exactly how the tobacco giant could easily comply with such directives. On the other hand, an FDA approval for iQOS could provide an alternative path to profit for Altria. The cigarette market is in flux, and the coming year could be instrumental in defining Altria's future strategy.