Please ensure Javascript is enabled for purposes of website accessibility
Log In Help Join The Motley Fool
Free Article Join Over 1 Million Premium Members And Get More In-Depth Stock Guidance and Research
By Jim Crumly - Dec 18, 2017 at 9:16AM

Is a setback in a trial of its only clinical drug a warning to stay away from this little biotech?

Small-cap biotech Cara Therapeutics (CARA -4.90%) is working to commercialize a drug to combat pain -- but the stock has managed to inflict a different sort of suffering on its investors in recent months. Hopes were running high leading up to the release of some trial data expected late in the second quarter but were dashed when results were disappointing, and the stock fell 40% in a single day. Ouch.

Were Cara's difficulties this year a sign of more problems ahead? Or is today's price, which is 53% below its 52-week high but still up 36% for the year, a buying opportunity?

An investment in the volatile Cara Therapeutics is essentially a bet on a single drug for pain, itching, and inflammation that the company has in human trials, CR845. The reliance on a single molecule for the survival of the company makes this stock pretty risky, but it's the promise of that drug that keeps investors interested. CR845 acts on receptors in the periphery of the body and on immune cells without crossing the blood-brain barrier. The fact that CR845 doesn't affect the central nervous system means that it lacks the drawbacks of today's opioid medications, including the euphoria that often leads to abuse. 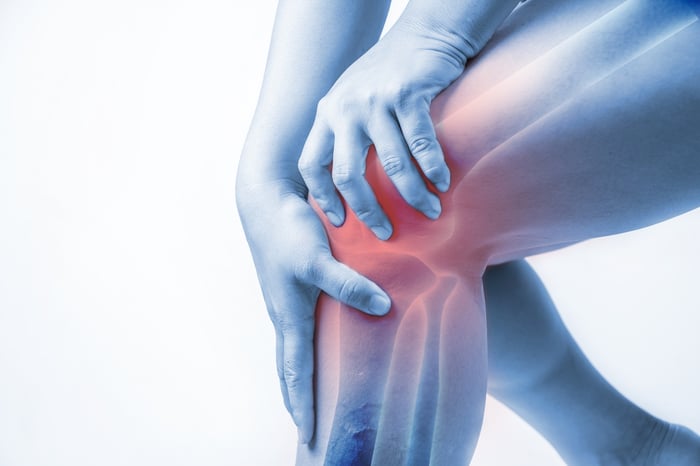 How damaging was the failed trial?

CR845 is being tested in both oral and IV forms for pain and pruritis, a severe and intractable itching condition that is common in patients with chronic kidney disease and is unresponsive to conventional itch medications. The trial that disappointed the company and its investors was for the one indication with the largest potential market: an oral formulation for the chronic pain of osteoarthritis. With 140 million prescriptions written for moderate to severe chronic pain in the U.S. every year, this is the big prize that had investors stoked in June.

The phase 2b trial was a placebo-controlled study of 476 patients with arthritis of the hip or knee, testing three dosage levels (1.0 mg, 2.5 mg, and 5.0 mg) twice a day for eight weeks. Patients who got the two lowest doses didn't show a statistically significant improvement, and of those on the 5.0 mg dose, only the patients with hip pain improved significantly. That was a pretty significant miss, although, in retrospect, the results of the phase 2a trial in December 2015 presaged the failure, also showing that a 5.0 mg dose was noticeably more effective than lower ones.

The results don't necessarily spell doom for an oral version of CR845 for pain, as the logical next step would be to test other dosing regimens or focus on more limited indications, leveraging the hip pain data. But in the last conference call, the company wouldn't be specific about plans for further trials, saying that it was exploring the idea of finding a partner to help with expenses. In the meantime, management plans to focus on trials for pruritis and IV CR845 for acute, post-operative pain. The bottom line for investors is that the oral version for chronic pain is off the table for now.

A pivot to less-risky indications

Although a pain pill would be the biggest potential prize for Cara, the move to focus on more certain "wins" is not a bad idea for the clinical-stage company. Earlier this year, Cara reported results from its phase 2 study of IV CR845 for pruritis in patients with severe kidney disease who are undergoing dialysis. The results were very good, with high statistical significance. The fact that there are no existing treatments that work for these patients whose quality of life is so degraded makes the chances of success with this indication that much higher.

The company estimates the potential patient population in the U.S. for IV CR845 for pruritis in patients undergoing dialysis is 200,000 to 300,000. The indication received a Breakthrough Therapy designation from the FDA, meaning that if the phase 3 trial underway now is successful, approval may happen quickly.

The company also announced it will launch an international trial in pruritis, start testing a pill form that could be used for non-dialysis patients that would expand the potential U.S. patient population to 4 million, and will file to begin investigating using the drug for pruritis in patients with chronic liver disease. In other words, the company is expanding efforts in the area of least trial risk and least competition.

Meanwhile, a phase 3 trial for IV CR845 for post-operative pain is recruiting now, and the data could be available in the first half of 2018. The market for that indication is somewhere between the ones for pruritis and chronic pain, with about 60 million post-op patients in the U.S. annually.

That 40% drop in stock price may have been a shock to the shareholders, but prior to that, Cara stock had run up more than 57% in less than two weeks in anticipation of the arthritis trial data. This is not a stock for the faint of heart, but today's price is much more reasonable now, even excluding the oral pain formulation from the thesis. The current market capitalization of $415 million is less than when it had its first secondary offering over two years ago, and the company is much closer to having a commercial drug now, with several catalysts expected next year. Cara has enough cash on hand to cover expenses into 2019, thanks to a shrewd secondary offering earlier this year when the stock was at $18.

The silver lining of the failed trial is that the company has taken a more conservative approach in the near term by focusing on pruritis and acute pain where the odds are better. It has also given us a much better price for the stock.

No drug trial is a sure thing, and this company has placed all its bets on a single molecule. For those willing to accept that high risk and ride out the volatility, Cara Therapeutics is a buy.