BlackBerry's (NYSE:BB) impressive transformation from a seller of smartphones and tablets into a provider of cybersecurity software and services has boosted investor confidence in the stock. The company's shares have already gained more than 43% in 2017, and investors will be hoping it can extend the terrific run when it releases its fiscal third-quarter results on Dec. 20.

Will BlackBerry be able to trump expectations this time and keep investor confidence high? Let's find out.

Wall Street expects BlackBerry's third-quarter revenue to drop 28% year over year to $216.6 million, as it continues to wind down its handheld-device business and the revenue generated by providing services to users of legacy devices. In addition, analysts are modeling a breakeven bottom line against adjusted earnings of $0.02 per share in the year-ago period.

But it won't be surprising if the company's results surpass consensus estimates once again, thanks to the growing traction of its software and services business. During the second quarter, BlackBerry's software and services revenue jumped 26% year over year on a non-GAAP basis, boosting its gross profit margin by 14%.

The company got 79% of its revenue by selling security software and other services in the second quarter. This segment should contribute a bigger share during the third quarter, considering recent contract wins and the dwindling clout of the legacy businesses. For instance, BlackBerry's services and solutions are finding a lot of traction at government customers.

The company had struck 23 federal deals during the second quarter, with transaction sizes exceeding $100,000. Of these, seven deals were worth more than $500,000 and five exceeded the $1 million mark. In addition, BlackBerry is busy ramping up its Radar and Internet of Things (IoT) business by increasing channel sales partners.

It had added two new resellers during the second quarter that serve over 10,000 customers around the globe, selling IoT solutions for fleet tracking services. Such initiatives could boost BlackBerry's revenue and margin once again this time, though the long-term gains could be even more substantial. Let me explain how.

Looking beyond the results

BlackBerry is busy targeting numerous fast-growing areas to boost long-term growth. For instance, it's trying to make a dent in the vehicle telematics market through the radar business, which sells solutions that help fleet owners increase the efficiency and utilization of their vehicles based on real-time inputs.

The good news is that this business is gaining good traction because of BlackBerry's aggressive sales push. Back in September, Titanium Transportation decided to buy BlackBerry's advanced Radar-L devices that can be deployed across a range of vehicles such as containers, flatbeds, agriculture, and construction equipment. 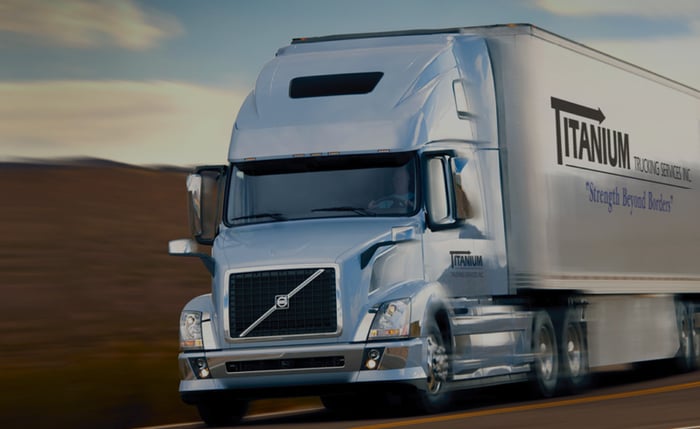 Titanium was earlier using the Radar-M solution that could have been deployed across just three use cases, compared with Radar-L's eight use cases. Moreover, BlackBerry has expanded its radar portfolio by adding a low-cost version that will enhance its addressable market from 8 million units to 28 million.

In all, these are promising developments for BlackBerry, setting it on its way to tap the rapidly expanding fleet management market that's set to grow at almost 16% a year through 2022, driven by an increased focus on operating efficiency. On the other hand, BlackBerry also has its hand in the autonomous-vehicle market as well, on the back of its recent collaboration with Delphi (NYSE:DLPH).

In September this year, Delphi chose BlackBerry's QNX software for powering its Centralized Sensing Localization and Planning solution, which is a fully integrated autonomous-driving platform. More importantly, Delphi is collaborating with Intel and Mobileye to develop this platform, so it's a good thing that it has chosen BlackBerry to provide software support based on the latter's security expertise.

This partnership could soon be fruitful for BlackBerry as Delphi plans to start offering this solution from 2019. The partnership could give BlackBerry a ready market to tap, as Mobileye's technology is already used in 15 million cars thanks to its relationships with 27 automotive original equipment manufacturers (OEMs). Delphi, meanwhile, is one of the top automotive component suppliers catering to all 25 of the largest automotive OEMs around the globe.

Hence, BlackBerry is doing the right things to take advantage of automotive growth across various verticals. Not surprisingly, analysts expect the slowdown in the company's top line to diminish remarkably next fiscal year, projecting a drop of just 2%, against an estimated 32% decline in the current one.

This should also boost the company's bottom-line performance, as the software business carries a higher margin. Therefore, BlackBerry investors can expect another round of improvements when it releases its third-quarter results, which should confirm that its transformation is firmly on track.