Please ensure Javascript is enabled for purposes of website accessibility
Log In Help Join The Motley Fool
Free Article Join Over 1 Million Premium Members And Get More In-Depth Stock Guidance and Research
By Reuben Gregg Brewer - Dec 19, 2017 at 9:01AM

Both of these propane partnerships cut their distributions, but one is in a better position to prosper in the future.

The propane delivery industry in which Ferrellgas Partners (FGP) and Suburban Propane Partners (SPH 1.76%) operate is heavily reliant on demand from heating applications. That's been a problem over the last couple of years because of extremely warm winters, which reduced demand for their services. That slack demand coupled with elevated debt loads is what led to distribution cuts at each partnership. However, Suburban's future looks more secure. Here's what you need to know to understand why Suburban is the better buy.

Suburban's distribution yield is around 10%, with Ferrellgas' yield slightly lower at 9.4%. However, it's worth noting that those yields are that high even after distribution cuts. Ferrellgas cut its disbursement a painful 80% in late 2016, with Suburban trimming by roughly a third in late 2017. The yields on these two partnerships remain elevated because their unit prices dropped along with the distributions, with Ferrellgas down around 35% so far in 2017 and Suburban off by about 20%. 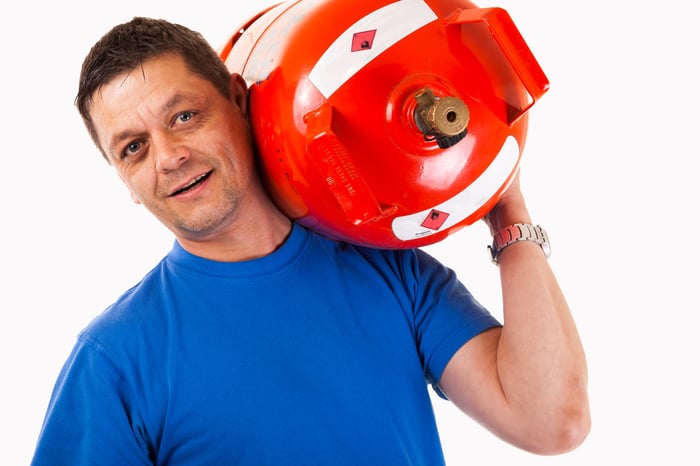 Propane is used for more than your backyard cookouts. Image source: Getty Images.

To be honest, at this point, I think there are better options for income investors seeking exposure to the energy industry, such as Enterprise Products Partners LP (EPD 0.62%), a conservatively run midstream partnership with a 20-year history of distribution hikes and a yield of 6.5%. But if you are looking for more yield than that, Suburban and Ferrellgas might still be on your radar. The big question you need to answer: Now that the distribution cuts have been made, where do the partnerships go from here?

A mixture of heavy debt loads on their balance sheets and relatively weak demand was what ultimately drove both partnerships to trim their distributions. For example, Suburban's long-term debt makes up around 70% of its capital structure (a result of a major propane acquisition in 2012). Interest expense, meanwhile, accounted for a massive 75% of operating income, up from 44% in fiscal 2015. No wonder the partnership is looking to reduce debt levels. It also took advantage of low interest rates in fiscal 2017 to refinance some debt at lower rates, trimming annual interest expense by a meaningful $5 million a year. The late 2017 distribution cut is meant to free up more cash for debt reduction.

Clearly Suburban has some issues to deal with on its balance sheet. But that's all it is. Suburban is operating through a tough environment and is taking the steps necessary to keep its business growing and financially strong. The cut was bad for unitholders, but the right move for the partnership. And the path forward is pretty clear: pay down debt. 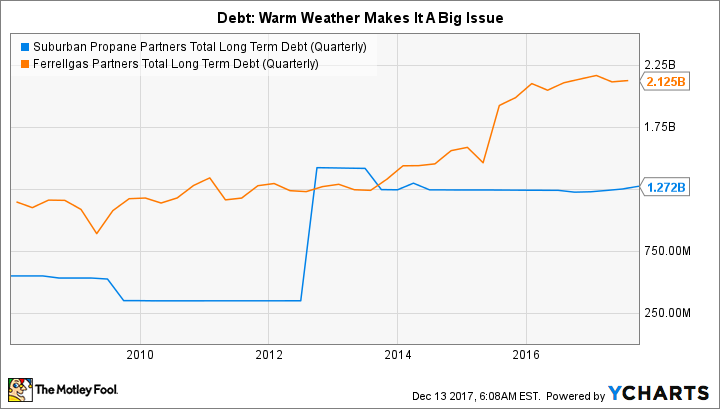 The future is far less certain at Ferrellgas, which is more of a turnaround play. Ferrellgas' leverage issues stem from a debt-fueled and ill-fated move to expand into the midstream energy sector. After the loss of a large customer in its newly acquired midstream business, the partnership wound up writing down the value of those assets and faced the prospect of materially reduced revenue from the business. Coupled with warm winters, the partnership was forced to trim the distribution.

Today, long-term debt makes up more than 100% of the capital structure because limited partner equity is negative due to the asset writedowns. Interest expense in fiscal 2017, meanwhile, outstripped operating income. I believe the partnership will manage to survive these headwinds as it works to right the ship. And there's material turnaround potential for the shares. But Ferrellgas has a lot more work ahead of it than Suburban. Notably, that includes figuring out what to do with the midstream assets it acquired -- a material overhang that isn't an issue for Suburban.

There's two big takeaways here. The first is that you can find material yields in the energy space that don't require taking on the risks inherent to Suburban or Ferrellgas. I'd suggest starting with conservatively run Enterprise and its 6.5% yield. The second key point is that while Suburban is suffering from many of the same ailments as Ferrellgas, it doesn't have to deal with the aftermath of an ill-advised expansion into a new business. That makes it the better choice here.