While the MLP outperformed its peers this year, it still wasn’t one for the record books.

Midstream giant Enterprise Products Partners (EPD) turned in a lackluster year in 2017. While the company outperformed most MLPs since the sector delivered a negative total return this year, Enterprise's meager 3.6% total return through mid-December fell well short of the best MLPs of 2017. Further, it was also well behind the red-hot S&P 500, which returned more than 22% this year.

Here's a look at why the company didn't deliver much value for investors this year and if that trend can reverse in 2018. 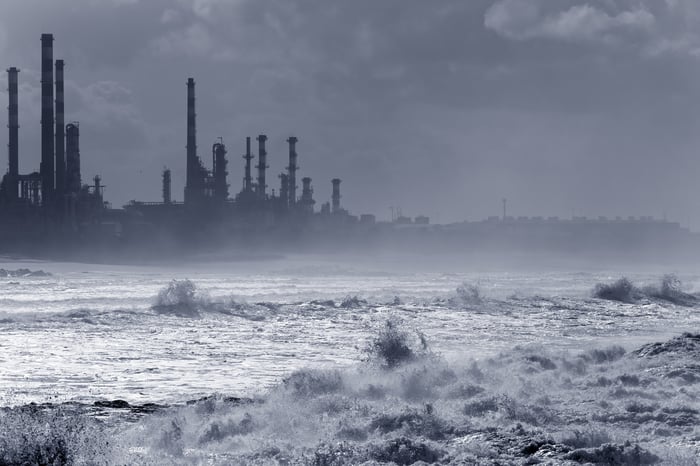 Overall, Enterprise Products Partners delivered solid results this year, with distributable cash flow (DCF) improving every single quarter versus the prior year. That said, the rate of the increase in DCF was rather tame, which was one of the things that seemed to keep a lid on Enterprise's valuation this year:

Further, while the first quarter of 2017 did mark the company's return to growth after several weak quarters during the oil market downturn, the aftereffects of the soft oil market kept DCF from improving as much as it could. For example, the company noted that production in the Eagle Ford Shale continued falling due to the impact of lower oil prices, which reduced volumes flowing through its systems.

Meanwhile, the third quarter was challenging for the industry because Hurricane Harvey caused historic flooding in Texas, including dumping 50 inches of rain on the company's crucial Mont Belvieu complex. The resulting downtime negatively impacted volumes while the storm also forced the company to delay the start-up of one of its largest growth projects by several weeks.

Another weight on Enterprise Products Partners was the decision to retain more cash in 2018 to finance its current slate of expansion projects by reducing the rate of distribution growth through 2019. The company said that going forward it would increase its distribution to investors by $0.0025 per unit each quarter instead of the $0.005 per unit quarterly increases it had been providing investors. By slowing its pace, the company will retain enough cash to internally finance a $2.5 billion annual expansion budget starting in 2019, which will ultimately make its distribution safer. That said, some investors saw this decision as a sign of weakness, which initially caused units to drift lower following the announcement. 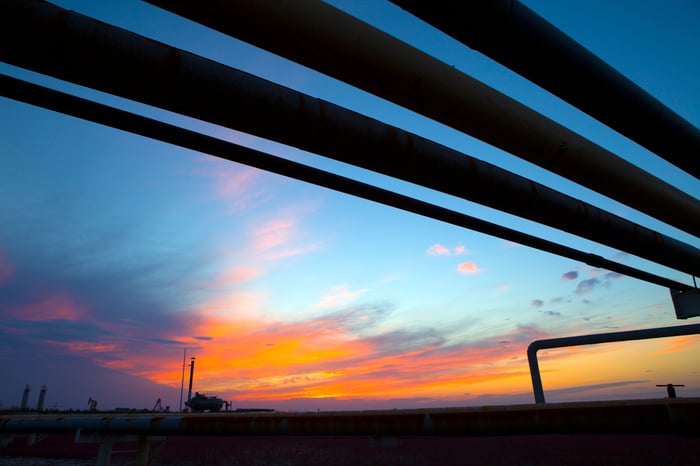 With DCF finally turning the corner in 2017, the wind should be at Enterprise's back in 2018. For starters, volumes on its legacy assets should continue recovering as drillers ramp back up, with the Eagle Ford, for example, potentially reversing its slide. Meanwhile, volumes on several recently completed growth projects should rise over the next year due to contractual obligations.

In addition to that, Enterprise expects to place $4.2 billion of expansion projects into service in the fourth quarter of this year, bringing its year-to-date total to $4.5 billion. Those expansions should significantly increase DCF in early 2018. Meanwhile, it has another $2.5 billion in projects scheduled to enter service next year. These include two new Permian Basin processing plants, which should start up in the second and third quarters of 2018 as well as additional crude oil infrastructure and other projects. While the company won't experience the full force of 2018's expansions until the following year due to timing, they will supply some incremental DCF next year.

The forecast for a 2018 rebound looks promising

While Enterprise Products Partners' DCF rebounded in 2017, persistently weak oil prices and other headwinds held back its full potential. However, those issues shouldn't be a problem next year because the company appears poised to unleash a one-two punch of rising volumes on its legacy assets with the start-up of new facilities to deliver significantly higher cash flow in 2018. That financial improvement could provide the company with the fuel to bounce back after a lackluster 2017, which is one of the many things that makes it a top MLP to buy right now.