Advances in medicine have come at a fast and furious pace in recent decades. New pharmaceuticals and biotechnology solutions have made patients healthier, and medical devices like the ones that Medtronic (NYSE:MDT) specializes in making have improved the standard of care for patients across the world. Along the way, Medtronic shareholders have also reaped the rewards of their efforts, with share-price appreciation and steadily rising dividends.

Yet the need to come out with new technology can be costly, even for a company of Medtronic's size. The hastening pace of innovation has some nervous about whether Medtronic will need to slow down its past dividend growth rates. Below, we'll look more closely at Medtronic to see whether investors can rely on its quarterly payout going forward.

Medtronic doesn't have the highest dividend yield in the industry, but its current level is still above the overall market's average. The company's yield right now is near the middle of its range from the past decade, which has climbed as high as 3% and has been as low as 1%.

For those who are concerned that Medtronic's dividend yield seems low, keep in mind that the stock price has more than doubled over the past five years. Even with steady dividend growth over that period, the increase in Medtronic's payout hasn't kept up with that share-price appreciation. In an industry in which many players don't pay any dividend at all, Medtronic remains friendly to shareholders with its dividends.

Medtronic's payout ratio is right around 50%, which represents a nice balance between retaining earnings to reinvest into its business and paying shareholders fairly for their investment. The payout has increased from the roughly 30% level that prevailed during most of the early 2010s, but some of that rise has stemmed from a brief decline in earnings during much of the past two years. Despite that temporary drop in its bottom line, Medtronic's payout ratio never rose to truly concerning levels, and with earnings on the rebound now, it appears that the medical device giant's payouts will return to their historical norms.

Medtronic's record of dividend growth is impressive. For 40 straight years, Medtronic has given investors annual dividend increases, qualifying the stock as a Dividend Aristocrat. Given how the company has had to weather several rounds of reform efforts in the healthcare industry, Medtronic's consistency is particularly noteworthy. 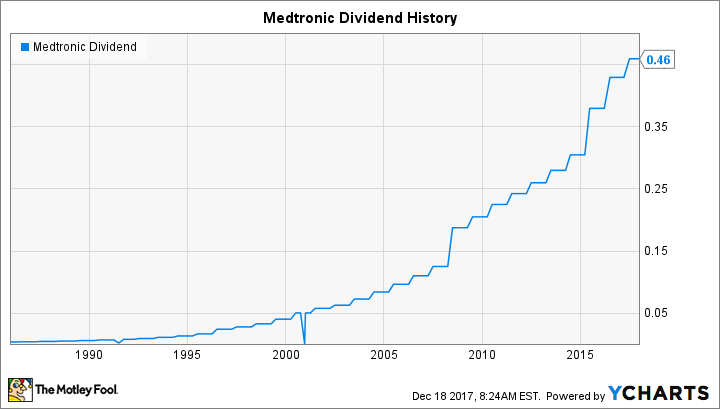 Moreover, the pace of Medtronic's dividend growth has far better than many of its Dividend Aristocrat peers. The company boasts a 12% average annual growth rate in its dividend over the past five years, as well as average gains of 14% to 15% over the past 10 and 20 years. That makes the company's most recent 7% rise earlier in 2017 seem a bit small, but over the long run, those peaks and valleys have evened out to impressive growth rates.

What's ahead for Medtronic?

The most exciting news for Medtronic has to do with its efforts to enter the robotic surgery space. The company intends to release its own robotic surgical system in 2018, targeting all procedures that competing robotic systems currently perform. Because of the extensive relationships that Medtronic has with potential hospital clients, existing competitors will face the prospect of defending their turf from a formidable rival.

Medtronic has also entered into a partnership with Mazor Robotics (NASDAQ:MZOR) to further its presence in the robotics industry. Medtronic is responsible for selling Mazor's spinal surgery devices, and it has taken a more than 10% stake in Mazor in addition to earning commissions when it sells Mazor products. Combined with other prospective new products like its artificial pancreas, Medtronic is making sure that it remains on the cutting edge of medical science.

What to expect from Medtronic's dividend

Medtronic has the stability and earnings power not only to sustain its dividends but to keep them moving higher. If new plans for growth pan out, then Medtronic could give shareholders even better returns in the future.