Please ensure Javascript is enabled for purposes of website accessibility
Log In Help Join The Motley Fool
Free Article Join Over 1 Million Premium Members And Get More In-Depth Stock Guidance and Research
By Anders Bylund - Dec 20, 2017 at 8:39AM

Big Blue is a big deal, and it's one of the best investments you can buy today. Read on to see how IBM's strategic imperatives will drive impressive sales growth.

Under CEO Ginni Rometty, IBM (IBM -0.91%) has been pursuing its "strategic imperatives" for five years now. 2018 just might be the year when Big Blue's dedication pays off in the form of renewed sales growth and stronger earnings.

Read on and I'll show you 10 great reasons to buy IBM stock today. 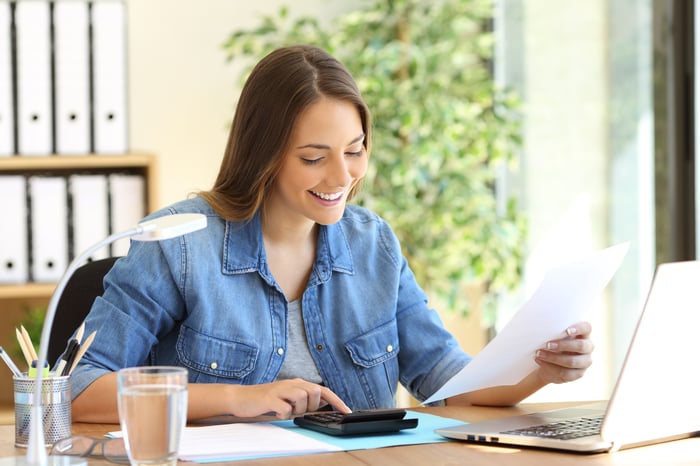 1. Change with the times or die trying

Your business won't stick around for 130 years if management isn't willing to adapt to changing market conditions. Big Blue is no longer the king of punch cards or mechanical adding machines, because there's not much of a business opportunity left in those markets. Likewise, IBM is currently getting out of the one-stop-shop model for all your IT needs that served it so well in the 1990s and 2000s -- there's a new era rolling in, and Rometty is pulling every string to stay relevant for the long run.

So IBM has sold off most of its computing hardware operations to double down on a basket of high-growth businesses known as the company's strategic imperatives. That combination of cloud computing, data security, artificial intelligence, and mobile technologies combined for $33 billion of the company's $80 billion in top-line revenues in 2016 and should account for over half of IBM's sales in 2018 and beyond.

3. Big Blue is already a leader in blockchain technologies

No, IBM is not a bitcoin miner. But the underlying technology behind the cryptocurrency boom is very much in Big Blue's wheelhouse. IBM has patented and marketed dozens of blockchain technologies, and there's plenty of additional research going on. For example, IBM's blockchain solutions are helping grocery chains and food producers track and manage meat and vegetable products from the farm to the store's checkout counter. That's just the beginning, and blockchain technologies are very much a part of IBM's strategic imperatives.

4. And don't forget about quantum computing

Quantum computers will be able to handle many equations that are downright unsolvable by traditional semiconductors. IBM is far from the only technology giant exploring this revolutionary new technology, but it's certainly an early leader in the quantum computing space. IBM's systems have scaled up from 5 qubits of computing power to 16 qubits over the last year alone, aiming for 50 cubits in 2018. The computing power that's unlocked by more cubits is an exponential graph, so the real gains or tripling the cubits are bigger than just running three systems in parallel.

5. The hard part of this strategy shift is all done

The new business strategy has been hard on IBM's top line and investor returns. IBM's annual sales have fallen 24% lower over the past five years as several high-volume businesses found new homes. Dividend-adjusted share prices fell 9% over the same period, missing out on a general market boom as the S&P 500 market index more than doubled over the same period, assuming reinvested dividends. But that should be the worst of it; IBM's management says that things are looking up in 2018, as the flag has been planted for improving business metrics from a trough in 2017.

Falling share prices plus an ironclad commitment to strong dividends equals a great dividend yield. None of IBM's peers comes close to matching this hand-over-fist return of cash directly to shareholders.

IBM is peerless when it comes to returns on shareholders' equity or returns on invested capital. That double play speaks highly of Rometty's efficient management of operations.

All of IBM's largest competitors saw their share prices skyrocket this year, as their products and services were in uniformly high demand.

9.... but investors have forgotten about IBM

It's easy to find IBM skeptics these days, holding share prices back and driving the price-to-earnings ratio straight down into the bargain bin. I suppose that's fine if you still think that Big Blue's comeback remains years away, but we've already covered plenty of bullish signs for the coming year.

On the upside, that means you could score some impressive returns on your own investment by betting on IBM today. We're talking about a high-quality company with industry-leading efficiencies and a skyrocketing portfolio of strategic imperatives operations. If IBM can prove its mettle in 2018, the company should deserve a premium price compared to its rivals -- not the big discount you see right now.