Please ensure Javascript is enabled for purposes of website accessibility
Log In Help Join The Motley Fool
Free Article Join Over 1 Million Premium Members And Get More In-Depth Stock Guidance and Research
By Demitri Kalogeropoulos - Dec 20, 2017 at 7:46AM

Sheetz has built up a dedicated fan base across its convenience store footprint that spans 450 locations across six states. Shoppers often drive by several competing gas stations to find a Sheetz. They're attracted by the low fuel prices, but they also love the made-to-order menu that includes sandwiches, burgers, and premium espresso-based coffee drinks.

Unfortunately, you can't invest in Sheetz stock since the company is privately held. But you can buy stock in Casey's General Stores (CASY 1.32%), which shares many similarities to the convenience store chain. You might also consider Kroger (KR 1.51%) stock, as the grocery store giant is enjoying a healthy business rebound right now. 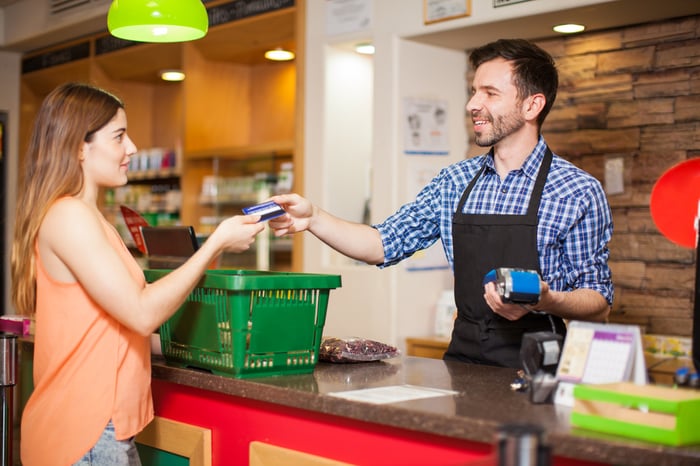 Casey's General Stores operates 2,000 shops across the Midwest, most of which are in small towns with populations of fewer than 5,000 people. It booked $7.5 billion of sales in the most recent fiscal year, translating into $177 million of earnings, or $4.54 per share.

The majority of Casey's customer traffic, and revenue, comes from gasoline sales, and so its operating results are sensitive to shifting fuel prices. Last year, for example, gas prices ticked lower and gross margin on these transactions fell to 8.6% from 9.1%. Yet the retailer makes its money by offsetting these low-margin sales with grocery transactions, which carry a 32% margin, and prepared food sales that weigh in at a hefty 62% profit margin.

Management has had trouble implementing that strategy lately. In fact, soft customer traffic led to surprisingly weak sales gains in the prepared foods segment last quarter, and the slump convinced executives to lower their profit outlook for the second time this year. Investors are right to be concerned about weak results in this segment. Stronger prepared food sales represent Casey's best shot at boosting profitability, after all. They also help the company stand out in a crowded retailing space, and so stumbles in this division could threaten its wider growth plans.

If you prefer a retailer that's seeing improving operating trends, consider Kroger. The grocery store titan recently posted its third consecutive quarter of accelerating comps, and CEO Rodney McMullen and his team have predicted another uptick in the fiscal fourth quarter. Kroger is a much more diversified retailing option thanks to its national footprint and massive scale. Fuel sales only make up about 10% of its business, and it also generates significant revenue from its pharmacy and online segments.

Unlike Casey's General Stores, Kroger locations are frequently found in major metropolitan areas, which means the company has to compete against some of the biggest retailers around, including Wal-Mart (WMT 0.08%). It has been ticking away at Wal-Mart's market share for over a decade now, though, mainly thanks to aggressive pricing and a focus on wowing customers with high-quality grocery and prepared food products.

Kroger is hoping that an aggressive push into that prepared foods segment, coupled with online ordering and delivery, will help power its next expansion cycle. If that initiative works, sales growth should start marching back toward the 5% level shareholders saw back in 2015 even as profitability improves -- giving investors plenty of good reasons to bid the stock higher.

Kroger and Casey's are imperfect substitutes for a Sheetz stock investment. But they've both applied elements of that convenience store's model, leading to profitable businesses that deliver quality grocery and food products to busy shoppers.