Windows Mixed Reality was inferior to Vive and Rift on day one.

In October, Microsoft (MSFT 1.28%) entered the virtual reality business with its Windows Mixed Reality platform and lineup of third-party headsets. The move was seen as an entrance into a business potentially worth billions, and the Mixed Reality moniker indicates that the company has plans for more devices in the future.

It may make sense for Microsoft to try to build a VR platform because the long-term profit will be with the company that owns the platform. But that potential also makes the VR product disappointing for both consumers and investors. 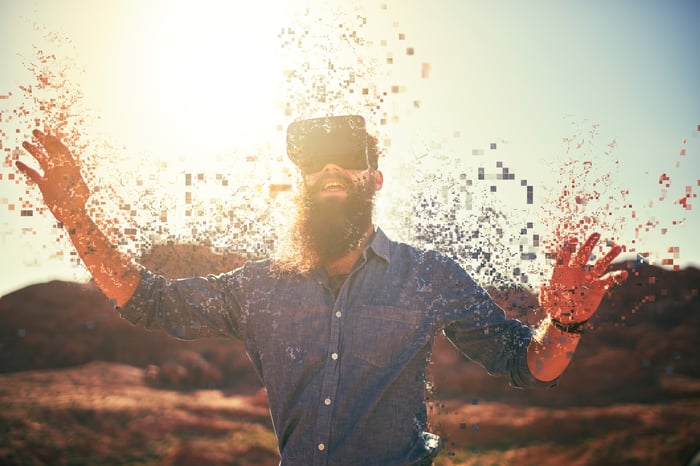 Facebook's (META 0.94%) Oculus Rift and HTC's Vive are the two high-end virtual reality platforms; both have been on the market since spring 2016. They have only sold around a million units each, but they're the clear leaders in the market. Microsoft saw an opening to build its own platform, and that's what it's going after.

Rather than building a VR product that works like Rift or Vive, which use outside sensors to track a user's movement in a headset, Microsoft uses sensors on the headset to track movement. It's not exactly the untethered inside-out technology VR users are hoping for, but it's a unique way to track VR.

The problem is, the two sensors that track head motion and controllers leave a lot of blind spots. Hold a controller close to your chest, and the system glitches. In gameplay, that's a huge weakness; it makes Windows Mixed Reality clearly inferior to Rift and Vive, despite being released a year and a half later. Even the headset display and latency seem inferior to those of competitors.

What problem is Microsoft solving?

The question is: What problem in VR is Microsoft trying to solve?

It could be argued that its headsets require less computing power than Rift and Vive and are less expensive, but recent price reductions for Rift and Vive have undercut that differentiation. Running VR on a laptop or less-expensive desktop computer could also be attractive, but with computer prices coming down, this advantage seems unsustainable.

Outside of some very minor ease-of-use differences, Microsoft's Mixed Reality doesn't offer any clear differentiation, and in my experience is clearly inferior to Rift and Vive. So why does the product even exist?

A company only gets one chance to make a first impression, and it looks like Microsoft failed to impress consumers with its VR play. That could turn off future consumers who are looking to buy a headset, steering them toward platforms like Rift and Vive.

For developers, the impact could be even more important. VR developers want to make higher-quality content for a large installed base of headsets. Right now they can port existing content to Microsoft's platform, and newly announced access to Steam will be helpful. But if Windows Mixed Reality isn't seen as a quality product and doesn't generate the sales of HTC or Oculus, they'll abandon the platform.

All of this is a risk for Microsoft's X-reality future. Its first step into the space looks like a real dud.