Artificial intelligence (AI) is creating a lot of excitement in technology circles, and every Silicon Valley company worth its salt is looking to use this emerging science to solve real-world problems. Google, a division of Alphabet Inc. (NASDAQ:GOOGL) (NASDAQ:GOOG), was one of the pioneers of the AI technique known as deep learning. Software models based on how neurons in the human brain work, called neural networks, attempt to re-create our ability to learn. By processing massive amounts of data, these systems begin to recognize patterns and detect differences. These models can then be applied to a variety of tasks.

Now, researchers from Google and the National Aeronautics and Space Administration (NASA) have revealed that, by using deep learning to analyze data from its Kepler Space Telescope, they've discovered previously unidentified planets in a distant solar system. 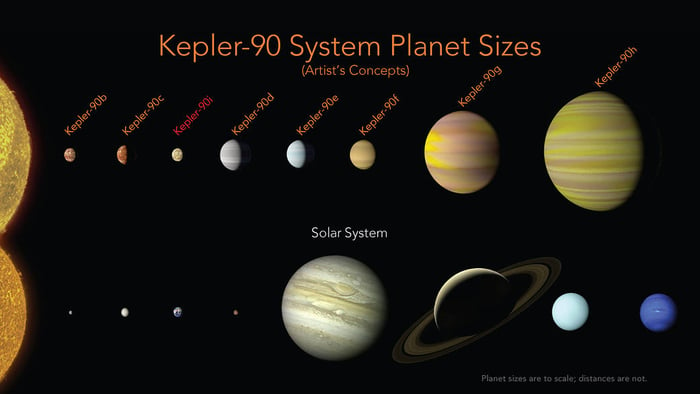 The Kepler Space Telescope, which launched in 2009, is a floating observatory that was designed to search for planets orbiting around a star. It looks for the transit -- the ever-so-slight change in brightness that occurs when a planet passes in front of its host star. This isn't something visible to the naked eye, but by taking careful and exacting measurements of the light a star emits over time, the system can detect the slight variations that occur when the orbit of a planet passes in front of the star. The larger the obstruction, the greater the amount of light blocked, allowing scientists to estimate the size of these planets from the changes in light readings.

Using a neural network Google designed, NASA researchers trained the system to identify exoplanets, a planet that orbits a star outside our solar system. The AI was taught to look for changes in the light readings, or signals, which would indicate the presence of a planet in orbit. The system was trained "using a set of 15,000 previously vetted signals" from the data Kepler sent. Once the training was completed, the neural network was able to correctly identify planets and false positives with 96% accuracy.

"The Kepler-90 star system is like a mini-version of our solar system. You have small planets inside and big planets outside, but everything is scrunched in much closer," said Vanderburg, a NASA Sagan Postdoctoral Fellow and astronomer at the University of Texas at Austin.

The research paper detailing these findings will be published in The Astronomical Journal. The success of this initial run has encouraged the researchers, who now plan to set the AI loose on Kepler's full data set of more than 150,000 stars.

This is but another example of the technological breakthroughs that are possible as the result of AI. Not all of them will come with a financial benefit, but they will allow us to boldly go where no one has gone before.