Please ensure Javascript is enabled for purposes of website accessibility
Log In Help Join The Motley Fool
Free Article Join Over 1 Million Premium Members And Get More In-Depth Stock Guidance and Research
By Rich Duprey - Dec 21, 2017 at 11:34AM

The motorcycle king hopes a big purse will ensure it doesn't get shut out again.

After dominating the sport of flat-track racing for so many years, Harley-Davidson (HOG 3.52%) was dealt a stunning upset last year, after Indian Motorcycle returned to the circuit following a more-than-60-year absence and swept the top three positions. 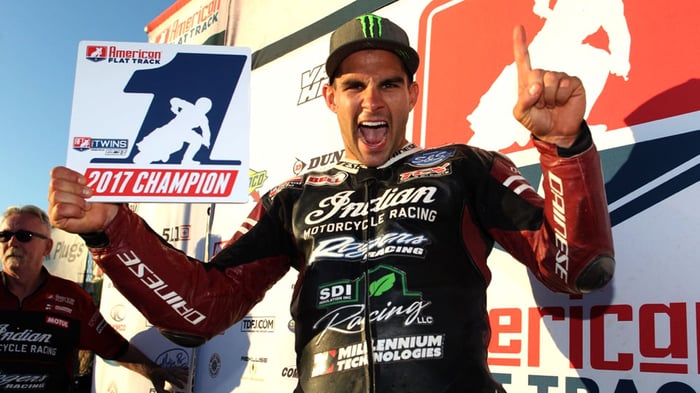 The humiliating defeat is undoubtedly why Harley-Davidson, one of the official partners of American Flat Track, recently announced it was posting $562,500 for its 2018 American Flat Track contingency program, the largest contingency ever put up in the 65-year history of flat-track racing. To put that in perspective, two years ago, the bike maker's entire program was only $96,000.

It probably also felt compelled to put a lot of money into the circuit because Indian's owner, Polaris Industries (PII 2.37%), was offering $350,000 in performance incentives.

The history of flat-track racing stretches back to the 1920s, and today it's an adrenaline-fueled spectacle where competitors race bar-to-bar on mile- and half-mile-long tracks at speeds of over 140 mph. There's a reason the sport bills itself as "America's original extreme sport."

Harley-Davidson and Indian Motorcycle have been competing against each other on the street and on the track ever since they were founded over 100 years ago. But Indian's existence has been one fraught with financial difficulties, and it dropped out of the racing circuit over 60 years ago.

On the warpath once more

Polaris Industries bought the nameplate out of bankruptcy in 2011, and by 2014 was producing street bikes again to much acclaim. It also quickly began hinting at a return of the Indian Wrecking Crew, a famed group of riders who rode their "Big Base" Scouts to victories in the years after World War II. Last year, Polaris unveiled the Scout FTR750, a bike featuring a proprietary, liquid-cooled 750 cc four-valve V-Twin engine developed by its elite swissauto division specifically for the flat-track circuit. 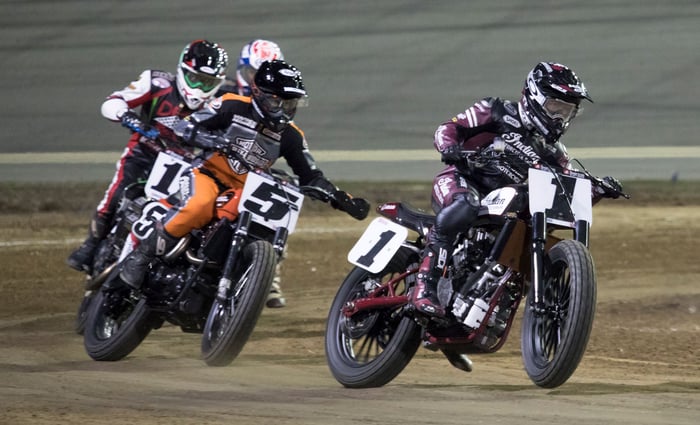 Although Harley seemed ready for the challenge, also unveiling its own new racing bike for the 2017 season, the first new model it had built in 44 years, it was the Indian Scout that dominated the track. And hinting at the superiority of the Scout, privateer Johnny Lewis earned his only podium appearance of the racing season in his very first race aboard the FTR750.(Privateers are racers who aren't officially or directly backed by one of the manufacturers like Harley or Indian that are entered in a race. It's those riders the contingency programs will support.)

For each of the 18 races in the American Flat Track 2018 season, Harley-Davidson is offering a total of $31,250 to privateers riding either its XG750R or XR750. A first-place finish will garner a $10,000 prize, with lesser amounts for lower-place finishes.

Polaris is offering $18,500 per race, with a $5,000 award for a first-place finish and, like Harley, incrementally lower amounts down the list. However, it's also offering a $25,000 award if a privateer wins the championship aboard the Scout FTR750.

The future of motorcycling

The flat-track circuit is more than just about bragging rights. There are two tiers of racing: the big V-twins produced by the likes of Harley, Indian, and other major bike manufacturers, but also races for smaller single-cylinder engine bikes, where younger riders are just getting a taste for the sport.

That's important not only for the sport but for the industry as well. The 18-to-24-year-old segment of the population is a key demographic for both, and American Flat Track racing is seeing its popularity surge. It certainly won't hurt if there's a true Harley-Davidson vs. Indian Motorcycle rivalry once again.

It may not be all about bragging rights, but Harley's contingency program is signaling that it intends to be the one doing the boasting. A bigger purse, however, may not be enough to overcome the Scout FTR750's many apparent advantages -- after his last win of the season, Mees said the bike was "like nothing I’ve ever competed on" -- even if Harley-Davidson is unleashing a host of privateers to go after it.