Helios and Matheson stock moves higher after its multiplex buffet scores a million subscribers, but it's the one that may be paying the ultimate price.

It's no surprise to see the best deal in the multiplex industry gaining momentum. MoviePass announced on Wednesday that it has surpassed a million subscribers to its namesake service, a debit card that lets members screen a single movie a day for just $9.95 a month. Shares of Helios and Matheson Analytics (HMNY 10000.00%) moved 3% higher on the news, as it owns a nearly 54% stake in the platform.

MoviePass has come a long way since it was servicing just 20,000 accounts in mid-August. Slashing the monthly price of its service from what had been as high as $30 to $50 to less than 10 bucks turns heads. The last movie ticket you bought was probably for more than $9.95, so just imagine how much money you can save if you see more than a single movie a month through MoviePass. Some of the larger theater chains have complained about MoviePass disrupting the value proposition, and it's easy to see why there's nervous rumbling among streaming video services if folks are flocking back to the corner multiplex.

At the end of the day, the theaters will benefit from the increase in box office sales. Streaming isn't going away. There's only one real loser when it comes to MoviePass hitting a significant seven-figure milestone this week, and -- spoiler alert -- it's the stock that rose 3% on Wednesday following the announcement. 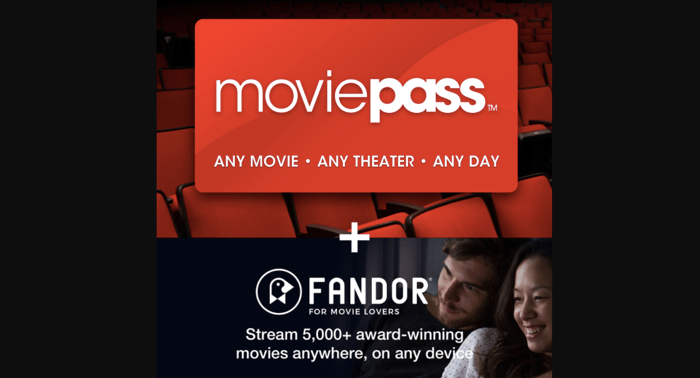 AMC Entertainment (AMC -0.15%) has been bellyaching about MoviePass since its summertime price cut, but it's a flimsy argument. AMC and most of its smaller peers are getting face value for MoviePass purchases. They're debit card transactions, and AMC revealed in its latest earnings call that it's collecting an average of $11.88 per ticket from MoviePass members.

Exhibitors were having another lousy year until It arrived in early September. Moviegoers flocked to the silver screen reboot of Stephen King's horror classic in record numbers, but it's probably not a coincidence that it was also just when MoviePass debit cards were getting sent out in droves to those hopping on the monster deal. AMC argues that it turns the value proposition of a night out at the movies on its ear -- and that's fair -- but AMC Entertainment and its rivals should all be thriving through the next few quarters as a million people and counting have MoviePass pay full price for the spike in flicks they're watching.

MoviePass is giving multiplex theaters a boost, and it's also bailing out Hollywood. Helios and Matheson itself has also pushed out press releases claiming that a large percentage of indie flicks promoting through the platform are seeing a spike in MoviePass redemptions relative to traditional purchases. If you are fortunate enough to get a MoviePass card -- they're still drowning in customer complaints on that front -- you're going to use it.

The only real loser here, unfortunately, is MoviePass. It claims that it will eventually be able to offset the multiplex subsidization through advertising, selling data, and working with theater chains for discounts, but there's no way that the data culled or the marketing pitched on an $11.88 movie ticket will cover that tab. MoviePass is going to bleed through a lot of money, and it wasn't a surprise to see shares of Helios and Matheson lose nearly a third of its value last Thursday after announcing a secondary offering at a fire-sale price. The MoviePass model is great for film buffs and probably even better for the film and theater industries. It's just had to imagine it ever becoming a sustainable business model.