Alas, poor MoviePass. We knew it well. AMC, Cinemark, and Cineworld hope their sequel alternatives are anything but tragedies.

MoviePass stormed onto the scene in 2017, offering a novel business model: a monthly subscription offering all-you-can-eat movies -- as much as one free movie every day of the month -- for the low, low price of just $9.95.

Consumers rejoiced at the upending of the $50-a-family night-at-the-movies business model that Hollywood had championed for years, and MoviePass' owner, Helios and Matheson (HMNY 10000.00%), quickly became one of the hottest stocks on the market.

But like an epic Shakespearean play turned into a film starring, produced, and directed by Sir Kenneth Branagh, MoviePass ended in tragedy this month. 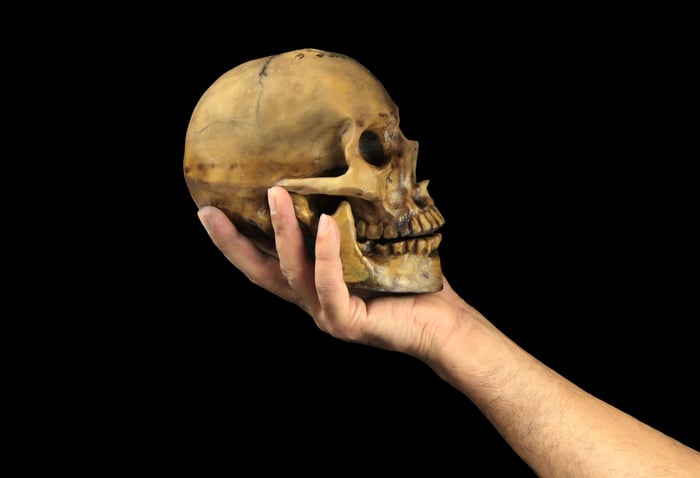 The press release just about said it all:

Helios and Matheson Analytics ... has formed a strategic review committee ... to identify, review, and explore all strategic and financial alternatives ... including a sale of the Company in its entirety [or] a sale of substantially all of the Company's assets, including MoviePass.

In so doing, Helios and Matheson hopes to unload "liabilities" racked up over years of selling movie tickets at below cost -- assuming it can find a buyer willing to take on that debt. Failing that, according to the press release, "there can be no assurance that the Committee's review process will result in any transaction." And in any case, successful or not, Helios will be "interrupting the MoviePass service for all its subscribers effective September 14, 2019" and "is unable to predict if or when the MoviePass service will continue."

In other words: RIP, MoviePass. You will be missed.

What it means for investors...

For just about anyone other than stock momentum traders, MoviePass' demise was both a foregone conclusion and a non-event.

Consumers who bought into the premise of MoviePass back in its heyday -- that the company could somehow make a profit selling $300 worth of movies for just $10 a month -- recall how MoviePass epically failed to make that business model work. In a matter of months, MoviePass had to raise prices, restrict access to the movies customers could see, and even shut down access entirely on occasion.

So when MoviePass came back to its customers in April with a heartfelt apology and a promise to make good on almost exactly the same business model that had already failed once, it certainly seemed likely that this sequel would be just as bad as the original. The company's requirement that customers pay for an entire year of service up front before getting to see any movies at all probably also set a few Spidey-senses tingling.

Now, as I predicted, the sequel has been cut short just five months after it began. As for Helios stock, well, it's tripled over the price it fetched before the company announced that it was all but certain to go out of business -- which tells you how illogical momentum traders can be.

... and what it means for consumers

But there's good news, too. MoviePass may have bungled its business model, but the companies it once hoped to profit from -- movie cinema chains Cinemark (CNK 1.46%), AMC Entertainment (AMC -3.96%), and Cineworld's (CINE 1.95%) Regal Entertainment -- may have learned from MoviePass' mistakes. Responding to the threat MoviePass posed, all three of these chains instituted movie subscription services of their own. (Regal was a bit late to the game, actually. I suspect its subscription plan was more a response to the threat Cinemark and AMC posed.)

Not required, like MoviePass, to pay full freight to buy tickets from a third party and resell them to customers at a loss, all three of these companies now offer pay-by-the-month movie subscriptions at prices that could, in theory, permit them to earn a profit. AMC charges its customers about $20 a month for the right to see as many as three movies per week. Regal's service is even cheaper -- just $18, and for "unlimited" movies. Cinemark has the cheapest offer of all, in a couple of senses. Its $9 subscription service entitles you to see ... one whole movie per month.

The upside for Cinemark is that, with the stingiest offer of the three, its business is currently earning the fattest profits -- $443 million in annual operating profit, according to data from S&P Global Market Intelligence, on sales of $3.2 billion. AMC seems to be holding it together as well. Although its profit has taken a hit since the subscription service was announced, AMC still generated $114 million in pre-tax profit on $3.9 billion in U.S. revenue over the past year.

As for Cineworld, it remains to be seen how profitable Regal Unlimited will end up being. The service only rolled out in the U.S. in late July. That being said, in the U.K. and Ireland, where Cineworld has offered a similar "unlimited" subscription service for years, the company booked a $72 million operating profit over the past year, on sales of $660 million. Of course, to do this, Cineworld has had to raise prices five times in six years to keep the profits coming. AMC also tweaked prices higher in certain states late last year.

Some advice for consumers

As popular as movie subscriptions have proved to be, I don't see the chains doing away with them anytime soon. (That would open the door for a new MoviePass to emerge, after all). But judging from the trends I see in falling profits and rising prices, I wouldn't be at all surprised to see these chains steadily ratchet up subscription prices over time.

My advice: Any time one of these companies gives you the option to lock in rates for a year or longer, take it up on that offer.