Here's a look at the sustainability of the Dividend Aristocrat's payout, and how it's set to grow in the future.

Dividend Aristocrat PPG Industries, Inc. (PPG -1.67%) has increased its dividend every year since 1972. But is its current dividend sustainable? And what can income-seeking investors expect in terms of long-term growth?

Let's take a closer look at the coatings company's prospects for dividend investors. 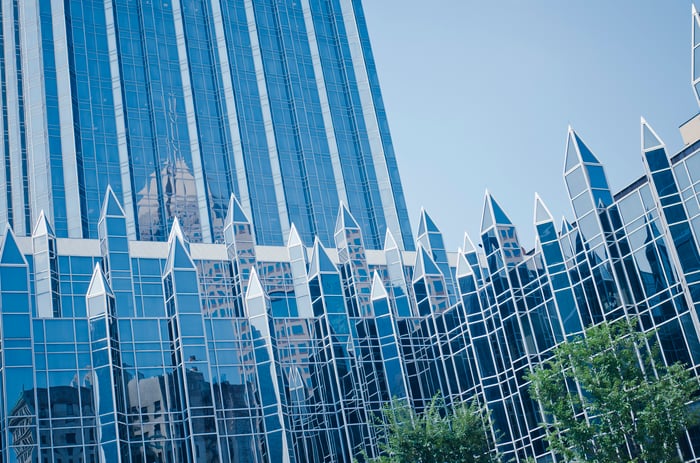 It's no surprise that PPG raised its dividend -- it's done so for the last 46 years. And as you can see below, the dividend has been increased at a compound annual growth rate of 5.2% over the last decade: 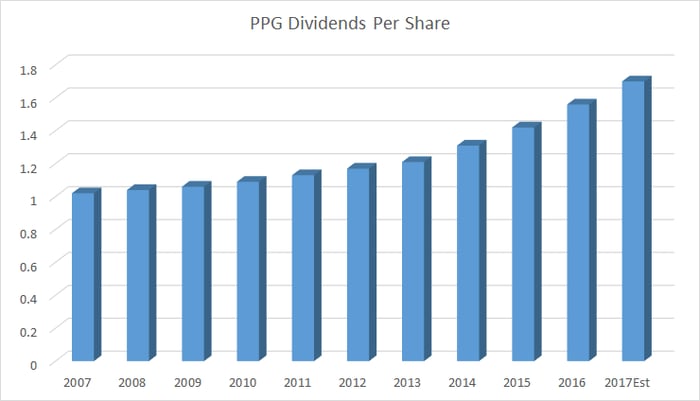 The company has plenty of firepower to increase its dividend in the future. The chart below shows PPG's payout ratio alongside its ratio of dividends per share (DPS) to free cash flow per share (FCFps). The payout ratio is the more commonly used indicator, and if viewed in isolation it suggests that PPG could struggle to meet its dividend payment if another recession occurred. For example, in the recession year of 2009, the payout ratio was 104%; that meant PPG was paying out more than its earnings in dividends, and that was with an adjusted dividend per share of just $1.06, compared to the planned dividend of $1.70 in 2017.

However, companies pay dividends from cash rather than earnings, and PPG is good at converting earnings into free cash flow. As you can see below, its DPS/FCFps ratio has been below 40% for the last nine years. And when the last recession occurred in 2008-2009, PPG managed to hold free cash flow steady by cutting capital spending, reducing receivables (money owed to the company by customers), and reducing inventories -- keeping the dividend safe. 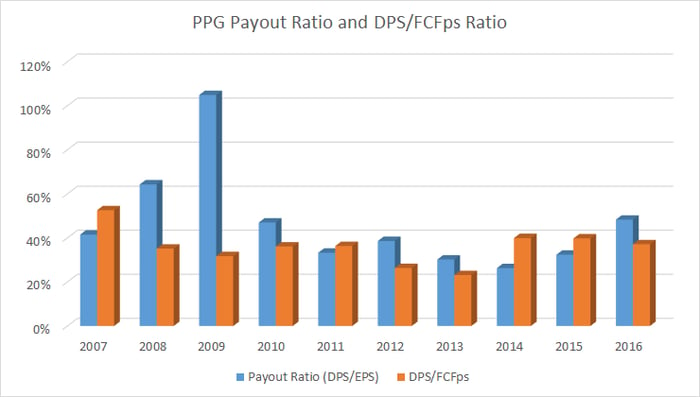 PPG could increase its dividend. But even without any increase in earnings and free cash flow, you shouldn't expect too much in 2018, because management is committed to spending $3.5 billion on acquisitions and share repurchases in 2017 and 2018. In fact, from 2007 to 2016, PPG's share repurchases made up 26% of its capital deployment -- compared to just 17% on dividends and 37% on acquisitions.

All told, it's fair to conclude that PPG Industries' dividend is safe and has the prospect of moderate growth. Now the question is: Can PPG generate the earnings and cash flow growth that would turn moderate dividend growth into something more?

Can PPG Industries get back to growth?

It's a good question, because the reality is that PPG Industries' revenue and earnings growth have stalled in the last couple of years: 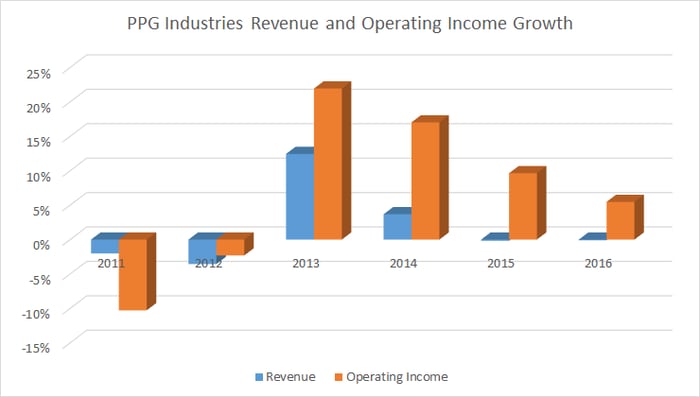 Also, the company was rebuffed three times in an ultimately failing bid to buy some growth by acquiring peer Akzo Nobel. This was a somewhat disappointing development, given how peer Sherwin-Williams' stock has performed since its acquisition of Valspar last year.

However, it's not all bad news. Over the last few years management has been busy selling off the company's noncore fiberglass business in order to focus on coatings, while taking ongoing cost-cutting measures intended to boost margin.

It's working. As you can see below, the company's sales, general, and administrative costs fell as a share of sales in the first nine months of 2017 -- that's the good news. However, the bad news is that increases in raw material costs pushed up the cost of sales. The end result is a fall in overall profit margin:

In other words, PPG is positioned to grow profits provided that pressures from raw-materials costs moderate in 2018. In addition, "2018 will be somewhat of a repeat of 2017, volumes modest[ly] up in the majority of the markets," said PPG's CEO Michael McGarry on the most recent earnings call. This implies that if raw-materials costs are more favorable in 2018, then PPG can expand operating-income margin and earnings growth will follow.

PPG is set to grow

Analysts expect PPG to grow sales at a 4.2% clip next year, with earnings per share up 12.7% -- figures that imply ongoing margin expansion. Throw in the possibility of some earnings-enhancing acquisitions that should lead to increased cash flow, and PPG has the potential to increase its dividend.

All told, PPG's dividend seems quite safe. And though it's never going to have the fastest-growing stock out there, the company has good prospects for dividend growth, and deserves consideration from dividend-focused investors.