2017 was a great year for the gaming industry overall, driven by a 19.5% jump in Macau's gaming revenue through the first 11 months of the year. You might think that Las Vegas Sands (NYSE:LVS) was a huge beneficiary of the increase in gaming because it has the largest market share in Macau. But that would be wrong.

This was the year when Las Vegas Sands began losing market share to competitors like Wynn Resorts (NASDAQ:WYNN), Melco Resorts (NASDAQ:MLCO), and MGM Resorts (NYSE:MGM) -- and investors should be worried that the losses will continue. 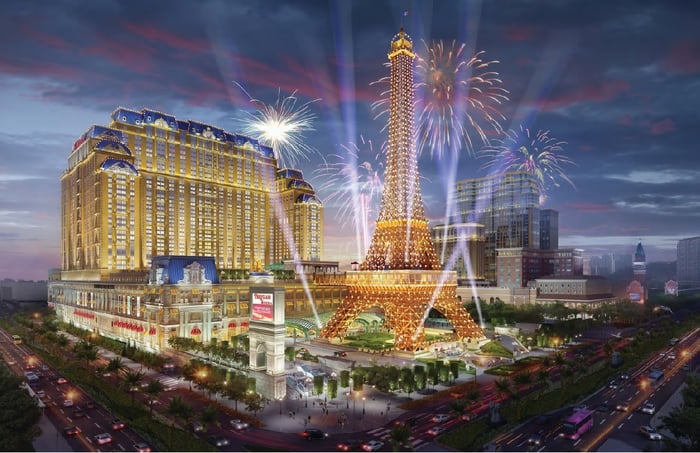 When Las Vegas Sands built its resorts in Macau, it focused primarily on the mass market. As the theory goes, margins are higher in the mass market and the business should be more stable than the VIPs Melco and Wynn focus on. For the last three years, that thesis held true and Las Vegas Sands did well, but the market reversed course in 2017.

VIP play is up 28.5% in the first three quarters of 2017 while mass-market play is only up 6.5% and that's meant Las Vegas Sands naturally lost market share to VIP-focused rivals. But that's not the only problem. New resorts are starting to take a bite out of the business.

In fall 2016, Las Vegas Sands completed The Parisian, the last major resort in the company's pipeline. Since then, Wynn has completed Wynn Palace, MGM is putting the final touches on MGM Cotai, Melco is expanding City of Dreams, and SJM is building a property on Cotai. New resorts are pulling gaming revenue away from older resorts and that's resulting in market share losses for Las Vegas Sands.

I don't see an end to the pressure in 2018 with two major resorts due to be completed and customers could trend to newer properties. 2018 could be a down year for the company, even if Macau grows overall.

The dividend is starting to come into question

What investors have been able to fall back on with Las Vegas Sands is its dividend yield of 4.1%, though that's starting to get a little risky, too.

You can see below that the dividend payout already exceeds net income and is approaching EBITDA, which we use as a proxy for cash flow in the casino business. If revenue falls in 2018, the dividend could be even more unstable. 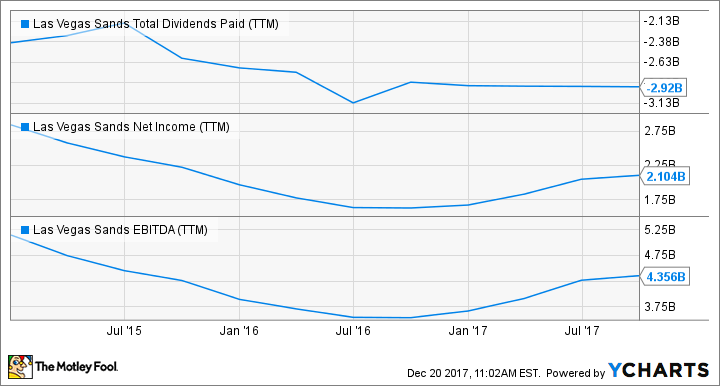 Keep in mind that Las Vegas Sands only owns 70.2% of Sands China, which is the subsidiary in Macau, so the EBITDA number you see above is actually overstating the cash flow coming into headquarters.

We know that two more major resorts in Macau will be completed in 2018, which will likely lead to significant market share losses for Las Vegas Sands. And if any growth in the market is focused at the VIP level, it'll mean even larger losses.

The operating trends just aren't working in Las Vegas Sands' favor right now. I'm not bearish enough on the company to make a thumbs-down CAPSCall, but if conditions worsen, the stock could be overvalued for investors.