On Thursday, shares of Embraer (NYSE:ERJ) spiked as much as 31% higher, before finishing the day with a 22% gain. The cause: a Wall Street Journal report stating that Boeing (NYSE:BA) had held talks with Embraer to discuss a possible acquisition of the Brazilian aircraft manufacturer. Boeing confirmed its interest in Embraer later in the day.

This potential tie-up is clearly a reaction to Airbus (OTC:EADSY) taking a controlling stake in the CSeries aircraft program. It's unlikely that Boeing will wind up buying Embraer outright, but closer cooperation between the two companies could be good for both of them.

Floating a deal in the face of government opposition

Boeing is eager to buy Embraer, according to the Wall Street Journal. It would pay a substantial premium relative to Embraer stock's recent trading price. To facilitate a deal, Boeing has offered to keep the Embraer brand and workforce intact, and it is also willing to work with the Brazilian government to protect the latter's interest in Embraer's defense business. However, as the world's No. 3 aircraft manufacturer, Embraer is a source of national pride in Brazil. Its defense business is also of strategic importance for the country. And because Brazil holds a "golden share" of Embraer -- a legacy of the company's origin as a state-owned enterprise -- the government has the authority to block any sale.

Sure enough, Brazilian President Michel Temer has already come out against any potential sale of Embraer to a foreign company. Temer is a fairly business-friendly leader, so his opposition indicates just how difficult it would be for Boeing to get approval to buy Embraer.

Why Boeing and Embraer want to team up

There's a good reason why Boeing and Embraer have expended significant effort negotiating a deal despite the Brazilian government's likely opposition. Working together is the best way for the two companies to compete with Airbus going forward.

Two months ago, Airbus announced that it will take a 50.01% stake in the CSeries jet program (pending regulatory approval) and assume full responsibility for sales, marketing, and customer support. This move should boost CSeries sales by giving potential buyers more confidence that the 100- to 150-seat CS100 and CS300 jets won't become orphan models. Airbus will also be able to offer CSeries jets as a part of package deals that include larger Airbus models. 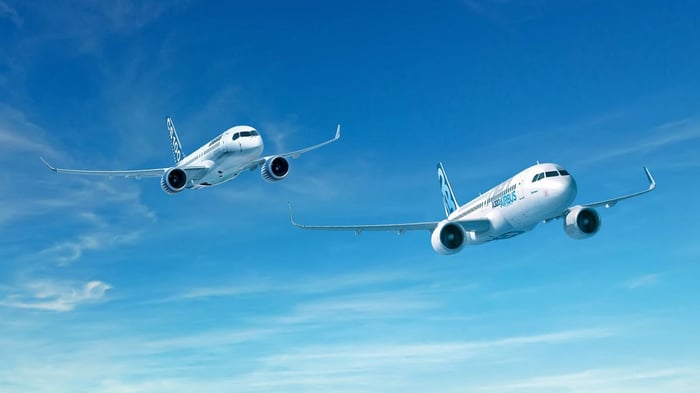 Airbus plans to add the CS100 and CS300 jets to its product lineup. Image source: Airbus.

This would put Boeing at a disadvantage, as its smallest model (the 737 MAX 7) is larger and significantly more expensive to operate than either CSeries jet. Meanwhile, Embraer would find itself competing directly with a company more than 10 times its size. It already has a hard time convincing airlines to look beyond Boeing and Airbus for their aircraft purchases.

Putting the Boeing and Embraer product lines together would make a lot of sense. Embraer's commercial jet portfolio covers the 70- to 130-seat range, while Boeing's starts at about 140 seats. Furthermore, the first planes from Embraer's new E2 family are set to enter service next year, so Boeing would be getting a fresh product without taking on any meaningful development risk.

While the Brazilian government is likely to prevent Boeing from buying Embraer, it wouldn't block a joint venture between the two companies. (Indeed, Boeing and Embraer already have a joint venture in the defense space covering international sales and support for Embraer's new KC-390 multimission military jet.) A joint venture -- perhaps including a minority investment -- could unlock many of the benefits of a full merger.

Boeing's main interest in a deal is broadening its portfolio. If Airbus offers a package of smaller and larger aircraft to a potential customer, Boeing wants to be able to counter with a similar offer. For this purpose, Boeing doesn't necessarily need to own a 100-seat jet program outright. It just needs the ability to sell a plane in that size range.

From Embraer's perspective, the main goal of a tie-up would be to spur sales of E2-series jets. Embraer believes that many airlines would be more profitable if they added smaller jets to their fleets to serve lower-demand routes. However, Boeing and Airbus tell those same airlines that it's more efficient to have a uniform fleet of larger jets. A joint venture with Boeing would change those conversations, giving Embraer a shot at dramatically expanding its customer base.

Buying Embraer might be the most straightforward way for Boeing to counter Airbus' CSeries deal. But a joint venture (or some other formal marketing partnership) would be nearly as good for both sides -- and far easier to pull off.