Please ensure Javascript is enabled for purposes of website accessibility
Log In Help Join The Motley Fool
Free Article Join Over 1 Million Premium Members And Get More In-Depth Stock Guidance and Research
By Daniel Miller - Dec 26, 2017 at 7:19AM

Ford Motor and Covanta Holding aren't the most popular companies on Wall Street, but they offer high dividend yields, and the prospect of brighter days ahead.

There are so many qualities to love about most dividend stocks. Generally, the companies behind them are stable, with proven business models and histories of producing strong cash flow. It's a comforting feeling to own shares of such a company, with the promise they will serve you consistent income each quarter.

But the world changes fast, and sometimes even those solid companies hit speed bumps, which can give patient investors the chance to pay a discounted price for a stock boasting a high dividend yield. And right now, Ford Motor Co. (F 1.71%) and Covanta Holding Corp. (CVA) are two that offer precisely that opportunity.

Ford won the hearts of Wall Street shortly after our nation exited the Great Recession, in large part because it had avoided needing a bailout, and quickly returned to profitability under its own steam. While that gave the automaker a head start on its turnaround, it has lost some momentum in recent years. But there are a couple of factors that will support Ford, even as domestic automotive sales peak.

One is the shift in consumer demand from passenger cars to trucks and SUVs. You might be thinking, "Isn't that how automakers got into trouble a decade ago?" The difference today is that SUVs and trucks were popular (and very lucrative for automakers) before the recession despite their awful fuel economy. But that weakness sent demand plunging when the economy tightened and people wanted to spend less money on gas. Fast-forward to today, and SUVs and trucks are strong sellers due to their utility and their vastly improved fuel economy. Many executives predict their popularity is here to stay; that shift in consumer preference will help support Ford's bottom line, as SUVs and truck sales have far bigger profit margins than sedans. 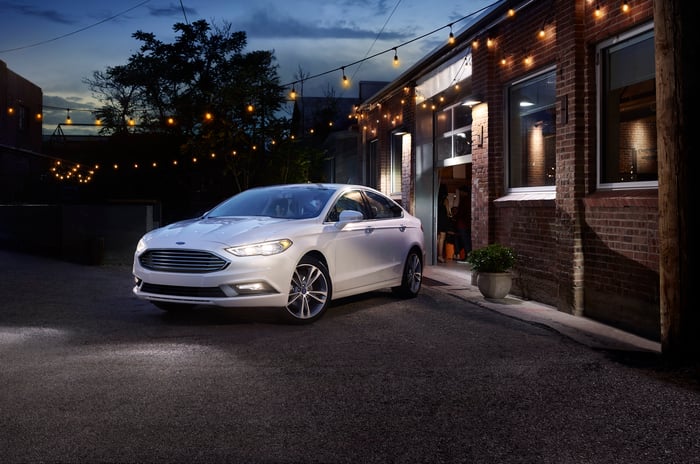 Ford's best-selling car in the U.S., the Fusion, has struggled in 2017. Image source: Ford Motor Company.

Another strength can be found in China. Ford is doubling down on its efforts to turn the world's largest automotive market into its second pillar of revenue and profits. Currently, the Blue Oval's crosstown rival General Motors (GM 1.35%) outsells it there by roughly 3-to-1. In fact, through October, GM  had sold almost 2.2 million more vehicles than Ford there -- which means Ford has a huge opportunity to gain ground. To capitalize on that, management says it will launch 50 new models in China by 2025. This plan is expected to grow revenue by 50% in the region over that time frame.

Investors have shunned Ford as the lucrative U.S. market hits its cyclical peak. But its dividend currently sits at a juicy 4.77% -- and don't forget about its annual special dividend payout -- and if sales of SUVs and trucks are here to stay, while it doubles its growth efforts in China, this is a hated stock you should love.

One investor's trash can be another's treasure -- and that's  especially true when it comes to Covanta Holdings. With over 70 facilities around the world, the company works to find sustainable waste management solutions for communities and companies alike. Covanta not only gets paid to take dispose of waste, but it also generates electricity (which it sells to utilities) by incinerating the nonhazardous solid waste. 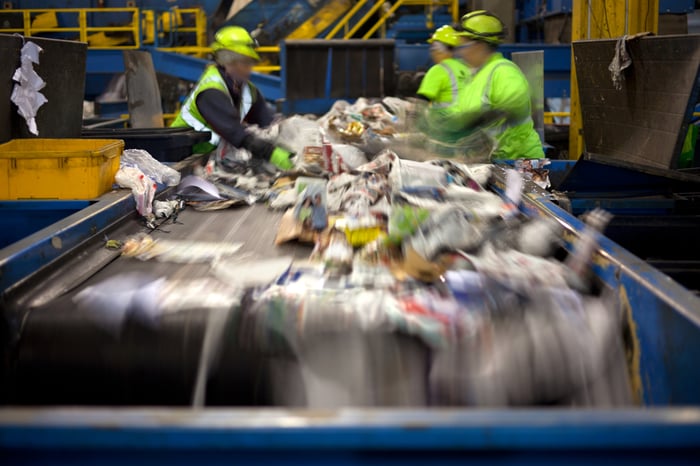 In America, waste incineration isn't as popular as it is in more densely populated Europe. That situation makes two recent developments for Covanta investors a big win. First, Covanta won New York City's contract for waste incineration, which could prove enormously helpful in convincing other major cities to follow suit. Second, after a set back, its new trash-powered electric plant in Dublin, Ireland, is now expected to be up and running by the end of 2017, and contributing to financial results in 2018.

In short, 2017 finally seems to be the year Covanta will put its years of challenging contract transitions and lower commodity prices behind it. With headwinds dying down, its Dublin facility coming online, and its New York City contract progressing well, investors should expected strong revenue growth in 2018. And those who buy in now can claim as an added bonus an enticing dividend yield of 6.19%.