As AI becomes more pervasive and milliseconds matter, decisions will need to be made at the device level. Some companies are already living on the edge.

While the concept of artificial intelligence (AI) has been around since the 1950s, putting it into practice wasn't possible until the advent of big data and speedy processors. In the last decade, though, researchers have made great strides taking AI out of the lab and integrating it into daily life.

The technique of deep learning has had the biggest impact in the field. Scientists created computer models inspired by the structure of the human brain in an attempt to re-create our ability to learn. These neural networks use complex algorithms, process reams of data, and learn to excel at pattern recognition. This has led to breakthroughs in speech recognition, language translation, and image recognition.

The next breakthrough in AI is already happening and it will move the processing out of the data center and to the edge -- or the periphery of the network, as close to the data source as possible. Companies like Apple (AAPL 1.56%) and NVIDIA (NVDA 3.87%) are leading the charge. 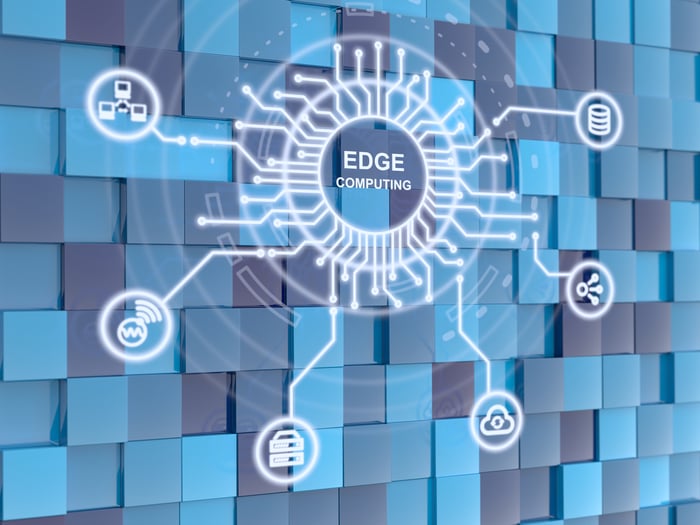 Edge computing is the next evolution of AI. Image source: Getty Images.

What is computing at the edge?

Because they are computationally intensive and process massive amounts of data, the majority of AI systems currently run in data centers, which can be thousands of miles from where the action takes place. Devices like smartphones, self-driving cars, and drones often rely on these brains in the cloud to perform the necessary complex computations. This has presented certain limitations, particularly in situations when connectivity is limited or nonexistent.

The next generation of AI technology will reside on these devices themselves or at the edge, with the ability to perform these processes locally. Companies like Google, a division of Alphabet (GOOGL 2.51%) (GOOG 2.68%), and Amazon.com (AMZN 4.38%) have flourished as the result of their massive cloud computing data centers, while others have sought to make the AI applications on devices more self-sufficient.

Due to its focus on privacy and data protection, Apple has taken a number of steps to secure the information. The company started by adding digital noise to the device data and was able to capture the trends, but stripped out the individually identifiable information before sending it to the cloud. This initially hampered the advancement of the company's AI systems.

To counter those limitations, Apple created a specialized processor it dubbed the neural engine. This cutting-edge chip was designed specifically for AI applications, and debuted with the release of the iPhone 8 and iPhone X. The A11 Bionic chip can perform many AI functions locally, thereby decreasing its reliance on the information housed in the data center.

iPhones are still the largest component of Apple's revenue, accounting for 55% of the company's $52.58 billion in revenue for its recently completed fiscal fourth quarter. Innovations such as these are key to the company's continuing success.

Enabling the Internet of Things

The majority of connected devices rely on AI by providing a gateway to the large datasets in the cloud. Aside from smartphones, these devices can include smart appliances, self-driving cars, video cameras, and drones. Transmitting data from these Internet of Things (IoT) devices to the cloud can be affected by limited bandwidth, slower speeds, and lack of connectivity.

Earlier this year, NVIDIA introduced its Jetson TX2, a platform designed for "enabling server-class AI compute performance for edge devices." The credit-card-sized processor does the vast majority of its processing at the device level, rather than sending data to the cloud for processing and waiting for it to return. This processing in real time is particularly important for AI applications like self-driving cars.

NVIDIA is uniquely positioned to take advantage of the developments in AI. Sales of its GPUs used for AI data centers have skyrocketed in recent years, producing triple-digit growth in each of the last six quarters. They now make up 19% of the $2.64 billion in revenue the company generated in its recently completed fiscal 2018 third quarter.

Not to be outdone

These developments have not gone unnoticed by companies that rely on cloud computing and data centers for their livelihood. Google has been beta testing Cloud IoT Core, a management platform for connected devices, with customers in the transportation, oil and gas, utilities, healthcare and ridesharing fields participating.

Amazon, too, is working to move closer to the edge. The company recently debuted Greengrass, a software platform that expands the IoT capabilities of its Amazon Web Services (AWS). The platform works to reduce the time it takes to transfer the data, lower bandwidth costs, and keep the most sensitive data on the local device.

These are just the latest developments in a technology that is still in its infancy. Expect to hear much more about edge computing in the months and years to come.