Bitcoin stocks are rising thanks to a jump in the price of bitcoin.

Shares of Riot Blockchain (RIOT 0.23%) are up about 20% as of noon EST as investors flock into bitcoin-related stocks to profit from the cryptocurrency's rising price. Notably, Bitcoin Investment Trust (GBTC -2.17%), a quasi-ETF for bitcoin that holds approximately 0.092 bitcoin per share, is joining Riot Blockchain in a broad bitcoin rally, rising about 23% so far on Tuesday. 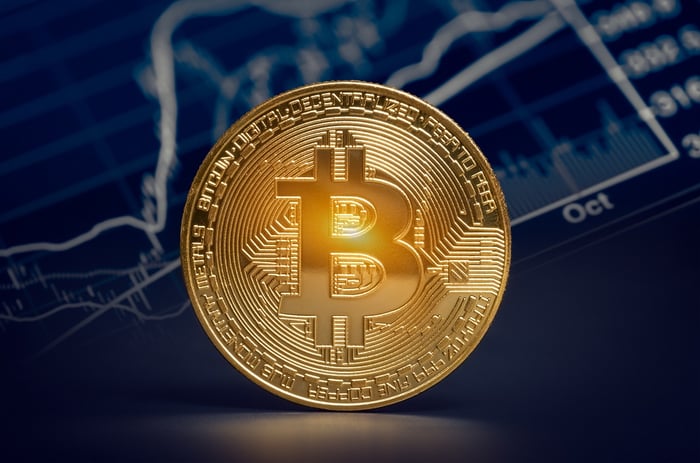 Beyond high-priced bitcoin futures, investors have few ways to speculate on the price of bitcoin with an ordinary brokerage account. Thus, stocks with any ties to bitcoin at all, even if in name only, tend to become vehicles for speculating on bitcoin's ups and downs.

At current market prices, shares of the kind-of bitcoin ETF Bitcoin Investment Trust trade at a price roughly 65% higher than the underlying value of its bitcoin. That's significantly higher than the median premium of roughly 42%. I use the trust's premium relative to its historic levels as a barometer for speculative demand for bitcoin assets.

The company recently announced that it raised $37 million by issuing approximately 1.65 million units entitling investors to one share, plus warrants to acquire an additional share at a price of $40. The equity raise gave the company more cash to seek out other investments in companies that make money selling the "picks and shovels" to others who are just getting in on the bitcoin gold rush, but only time will tell if its investments pan out for its shareholders.

Bitcoin Keeps Falling Along With Shares of Grayscale Bitcoin Trust
356%