Paying attention to unusual nuggets of information can flesh out perspective on a company's long-term prospects.

Shares of Dollar General Corp. (DG 0.88%) are closing out 2017 in fighting trim, having gained 25% year to date on the strength of a nearly 9% revenue increase during the first three quarters of the year. Dollar General and competitor Dollar Tree, Inc. (DLTR 0.80%) have proved resilient during the current low-growth economic climate, winning frequent visits from the budget-conscious, and in particular lower-income consumers who often rely on dollar stores for household staples.

As we look forward to 2018, I've compiled five fascinating facts about Dollar General stores, culled from the company's third-quarter 2017 earnings conference call conducted earlier this month. These tidbits, relayed by members of Dollar General's management team, illuminate factors that have contributed to the company's five-year annualized stock gain of 24% on a total return basis. They also help to shore up the investment rationale for its shares in the years ahead.

Dollar General's average ticket size across its 14,300 plus stores comes to just $12, and that ticket contains an average of five items. That the typical customer checks out with such a small basket, with five items averaging $2.40 each, is surprising. You'd expect both a slightly higher average ticket and higher item price.

Dollar General's business model doesn't rest on a single fixed price of $1 per item, which is the strategy employed by competitor Dollar Tree. Rather, Dollar General stores typically stock items from $1 to $10, more similar to the approach of Dollar Tree's Family Dollar subsidiary. By design, however, Dollar General guides customers to affordable items. At the end of the 2016 fiscal year, 80% of the company's SKUs (stock-keeping units) were priced at or below $5.

The purchase statistics indicate that Dollar General's customers are making frequent trips during the month, and that despite the presence of a broad array of price points, its core patron still finds the most value in items set closer to the magical bargain level of one buck. The broader implication is that Dollar General squeezes out a respectable net profit margin, which consistently falls between 5% and 6% annually, on the cheapest of items -- a sign of operational prowess. 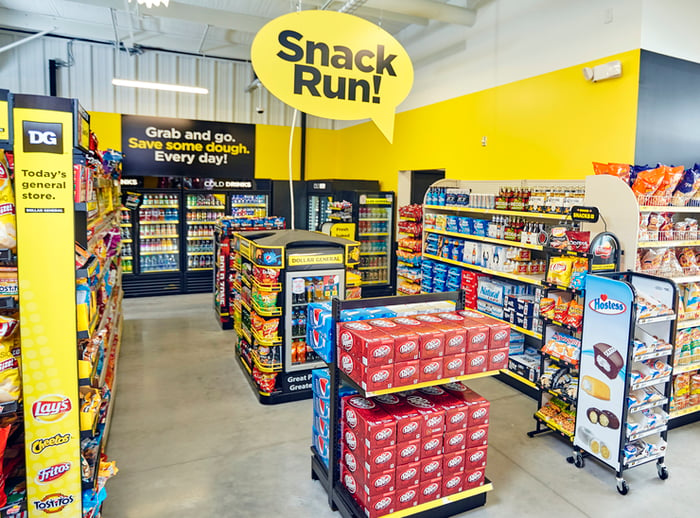 By the end of fiscal 2017, management expects that 75% of the U.S. population will be within five miles of a Dollar General location. That three out of every four people in the country will live within a short drive of the retailer's stores demonstrates how entrenched it is. But it also speaks to the survival strategy that the organization has employed, which is to push further into rural areas, building units in cities and towns that are too small for dominant competitor Wal-Mart to bother setting up shop.

3. $0 to $200 million in seven years with a single proprietary brand

While investors often associate the offering of proprietary products with grocery chains, private-label brands have proven a lucrative area for dollar stores to explore. Dollar General has licensed the Rexall name from healthcare giant McKesson Corporation since 2010. In just seven years, the company has built Rexall product sales of $200 million annually. The ability to expand higher-margin private-label products in the current climate provides dollar chains with margin insulation when recessionary downturns hit. Dollar General's Rexall license is set to expire in 2020, and whether or not it renews the rights, management has created a framework it can expand through additional licensing deals.

During Dollar General's most recent quarter, management completed over 634 real estate projects, including the opening of 470 new stores. That's a phenomenal amount of activity, and if you annualize this number, it translates into a full 18% of the company's stores that are being opened, closed, or relocated during the year.

Increasingly, as prosperity within the U.S. shifts, it's important for dollar retailers to hone the skill of introducing properties in high-growth areas, while shuttering, shifting, or remodeling locations where the purchasing power of customers is declining. The average Dollar General store is quite compact, averaging 7,400 square feet of selling space. This light footprint is a competitive advantage, as stores can return their initial investment in a relatively short period of time, and often, the economic consequence of breaking a lease is minimized.

5. The next significant growth area

Of the 400 "traditional plus" format stores Dollar General plans to open next year, which contain an average of 34 food coolers versus 18 in traditional stores, roughly 25% of locations will feature an expanded selection of produce (yes, produce). Now, fresh greens aren't top of mind for dollar store customers -- yet. But grocery holds much potential for dollar chains as a future growth area. Recently, my colleague Vince Shen and I discussed growing competition between dollar stores and major grocery chains; it's certainly a trend investors should watch in 2018.

More than three-quarters of Dollar General's sales fall in the consumables category, which includes food as well as household items like cleaning supplies and personal care products. Winning market share from grocers is an important step in the quest for the holy grail of dollar stores -- that is, to be perceived by core customers as a one-stop shop. To do so, Dollar General must offer more than snacks and packaged foods, hence the emphasis on produce. In other words, transforming itself to look more like the general stores of old will sustain Dollar General's profits as it looks to the future.