Please ensure Javascript is enabled for purposes of website accessibility
Log In Help Join The Motley Fool
Free Article Join Over 1 Million Premium Members And Get More In-Depth Stock Guidance and Research
By Eric Volkman - Dec 27, 2017 at 11:05AM

Investors should consider buying shares in these two companies that also supply food and drink.

Starbucks (SBUX -0.01%) stock is a justifiably popular investment. The company's stores are part of the American landscape in nearly every decently sized town or city, customers can't stop quaffing its coffee, and the company reliably turns a profit.

Thanks to its dividend, Starbucks has also been popular with some income investors. I believe, however, that there are other stocks in the food and beverage sphere that deliver a fuller cup of dividend than the coffee slinger. Here are two I'm particularly bullish on just now. 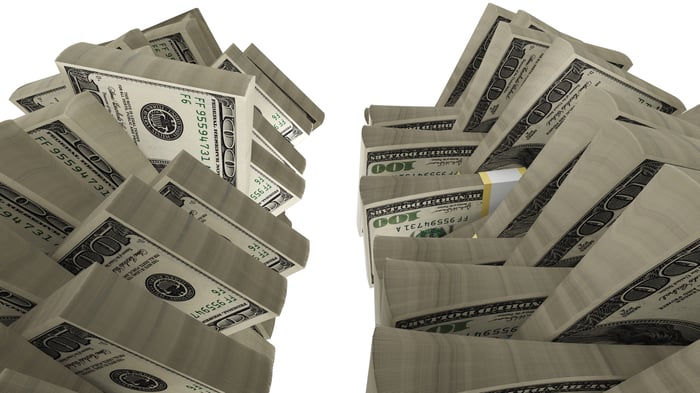 Unilever (UL 0.73%), is a global consumer-goods powerhouse that makes many of the top brands you'll find in the supermarket or drugstore, such as Lipton teas, Dove soap, and Ben & Jerry's ice cream.

This makes for a strong lineup that collectively produced 43 billion British pounds ($58 billion) in revenue in the company's fiscal 2016. More recently, in Q3 Unilever managed to lift its total sales by 2.6% on a year-over-year basis.

Although that missed the average analyst estimate of 3.9%, it wasn't bad considering that a) Unilever's product range is so big and sprawling, and b) the company is fighting against a general consumer shift toward products at least perceived to be fresher, more natural, or of local origin.

To its great credit, Unilever isn't sitting on its hands while this trend plays out. It has been retooling its product lineup for some time now.

Its latest actions in this regard have seen it divest a staid processed-food line (the spreads business that includes such brands as I Can't Believe It's Not Butter). Meanwhile, it's acquired brands that feel more wholesome and less "corporate," such as the Schmidt's Naturals personal care line and Brazil-based natural and organic food purveyor Mae Terra.

Both operating and free cash flow are robust for Unilever; those line items rose a respective 35% and 60% in Q3. So the company has plenty of dosh for its dividend. The shift in product portfolio has the potential to kick up sales, which should further improve profitability and cash flow.

Unilever's American depositary receipts currently pay a quarterly dividend of just over $0.41, representing a modest payout ratio of 33%, and a yield of just under 3%.

Not long ago, McDonald's (MCD -0.94%) was almost left at the table by investors, who instead flocked to stocks of fast-casual chains such as Chipotle Mexican Grill. That was then, this is now -- the fast-food king's shares have been on a tear this year, while those of some of its newer rivals have stumbled.

Why the change in fortune? Basically, McDonald's has very effectively risen to the challenge presented by those competitors. It can't really make its food super-healthy to jump on the current trend. It can, however, offer well-conceived new value-menu offerings, push its McCafe offerings to lure java lovers into its restaurants, and make efficiency gains by installing ordering kiosks near its counters.

These moves, among other initiatives, are markedly improving the company's results, which have been excellent over the past few quarters. Q3 was entirely in character, with global comparable-restaurant sales increasing by 6% on a year-over-year basis -- a very strong number for such an entrenched operator. Systemwide sales rose by 7% on a constant-currency basis, while net income zoomed ahead by nearly 50%.

McDonald's is doing a good job ascertaining what its customers want from the restaurants, and profiting accordingly. Speaking of profit, I think margins will widen due to the current refranchising effort, in which it's selling off company-owned restaurants -- franchising is a less capital- and resource-intensive activity (read: more profitable).

Optimism is in the air at McDonald's, so it wasn't surprising when the company recently raised its quarterly dividend by 7% to $1.01 per share. The payout ratio on the new amount is 44%, and its yield is 2.3%.

In contrast to Starbucks, which only started paying a dividend in 2010, Unilever and McDonald's have both been handing out theirs for decades. That, combined with very sensible strategies for future growth that should keep the payouts flowing, make the two stocks very fine candidates for income investors. Consider picking up shares in one or both the next time you're waiting at the counter for your morning latte.