Units of oil refining partnership Calumet Specialty Products Partners (NASDAQ:CLMT) plummeted more than 31% in early trading Thursday, before recovering to post "only" a 14.2% loss as of 2:20 p.m. EST. The reason, as you might expect, was "earnings" -- or, rather, losses.

On Thursday, Calumet reported a "diluted net loss per unit" (equivalent to a per-share loss in a stock) of $0.30 per share for its fiscal third-quarter 2017, on sales of $1.1 billion. This was kind of a "bad news, good news" situation, inasmuch as Wall Street analysts had expected Calumet to earn $0.25 per unit in profits in Q3. On the other hand, Calumet's sales were only supposed to come in at about $908 million. 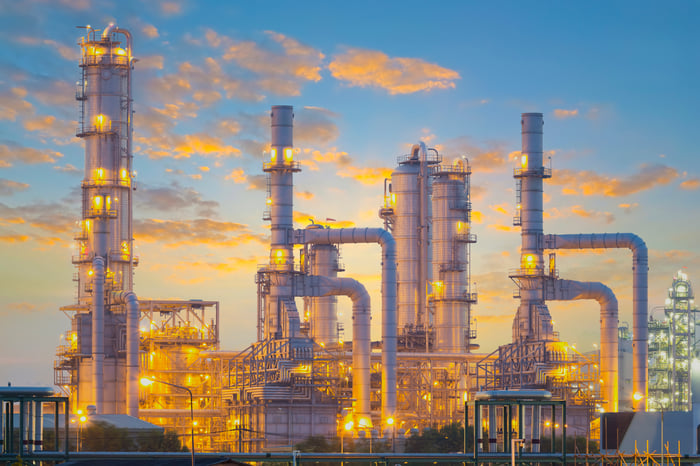 In short, Calumet "beat" on sales, but "missed" on earnings -- badly. And yet, not all the news was bad. Sales grew 13% year over year in Q3, and while the company ended up losing money on those sales, at least it narrowed its losses of one year ago. (Calumet lost $0.42 per unit in last year's Q3).

Management seemed pleased with the results, even if investors weren't. CEO Tim Go called the quarter's numbers "solid" and "improved" from a year ago, "despite significant supply chain disruptions in the Gulf Coast region due to Hurricane Harvey."

Going forward, Calumet says it still has the same long-term goals it has expressed in the past: to "improve... balance sheet leverage," "maintain cost discipline and drive further operational efficiencies."

The company's record here is mixed, however. Long-term debt levels have barely budged since the year began -- still just under $2 billion. Meanwhile, although cost of sales rose slower than sales growth (10% versus 13%), the company allowed its operating costs to rise 16% in Q3 -- faster than sales growth. In short, there's still room for improvement.

On the other hand, management says it has reined in its plans for capital spending for this year, and now expects to hold capital expenditures below $95 million. Assuming that helps to cut costs and frees up cash for paying down the debt, maybe we'll see more of the promised improvement next quarter -- and a better reaction from investors.