Patient investors may have an opportunity to participate in future appreciation and income at a discount.

Given Canadian banks' history of operating stability, credible price appreciation, and attractive dividend yields, buying major ones within dividend portfolios is sensible in most years, but macroeconomic factors make them especially attractive today. In this article, we'll briefly review prototypical Canadian bank investments and discuss a potential bonus that may lift investor returns over the intermediate to long term.

Toronto-Dominion Bank (TD 0.42%), Bank of Montreal (BMO 1.78%), and Royal Bank of Canada (RY 1.59%) all belong to the "Big Five" group of the largest Canadian banks, a set that also includes Bank of Nova Scotia (BNS 0.62%) and Canadian Imperial Bank of Commerce (CM 2.17%). All three are characterized by high credit quality and ample profitability and revenue growth.

Among these, Toronto-Dominion bank may be most familiar to U.S. investors, through its TD Ameritrade brokerage subsidiary. In fact, Toronto-Dominion boasts diversification through extensive banking and brokerage operations in the U.S. In the company's most recent quarter, U.S. retail operations' net income of $776 million (in Canadian dollars, as are all figures that follow) accounted for nearly 29% of the bank's total net income. More broadly, Toronto-Dominion achieved top-line growth of 6% in its most recent quarter. This was due in part to the recovering Canadian economy -- "TD" saw a record number of real estate lending originations during the last three months. Toronto-Dominion is notable for its incredible 160 year streak of dividend payments, which my colleague Matthew Frankel discussed in depth earlier this year.

Bank of Montreal has followed Toronto-Dominion's lead in expanding into the U.S. During the company's fiscal fourth-quarter 2017 earnings report released earlier this month, management noted that its U.S. subsidiary has notched a 13% compounded annual growth rate over the last two years, contributing $1.4 billion to bank earnings, or roughly one-quarter of "BMO's" total bottom line. Bank of Montreal supplements Canadian and U.S. retail operations with wealth management, capital markets, and corporate services segments, which together provided a quarter of total net income during the fourth quarter. 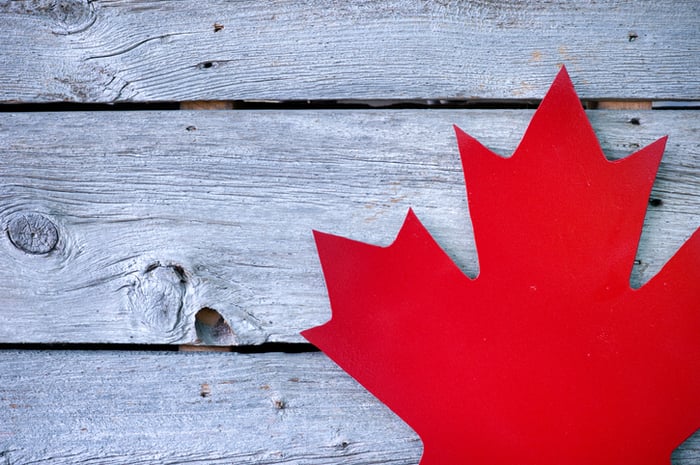 Like Royal Bank of Canada's peers, revenue diversification is a priority. Retail banking comprised just under 50% of net income in the organization's most recent quarter, with the remainder of earnings derived primarily from wealth management, capital markets, insurance, and treasury services. "RBC" has benefited over the past year from the expanding Canadian economy, though in a slightly different manner than close rival Toronto-Dominion bank. Increased volume in personal and commercial banking, as well as higher interest income courtesy of interest rate increases by Canada's central bank, have helped expand Royal Bank of Canada's revenue by 5% over the last 12 months.

For a bird's-eye view of the three banks, I've lined up several metrics for comparison:

From this table, what strikes me most is the similarities between operations and valuations between the three banks. All three sport similar profit margins and are valued almost equally by market participants based on forward earnings. Each writes hefty dividend checks to shareholders, and all three maintain a similar payout ratio in the mid-40s range, which implies that future dividend increases are eminently manageable.

Buy in 2018 to reap a bonus in the coming years

Indeed, the U.S. dollar bested most major currencies between 2013 and 2016. However, in 2017, it's wilted against rival currencies and is on pace for a 12% decline against the euro -- its worst showing since 2003. The greenback has lost more than 6% against the Canadian dollar in 2017.

The loonie appears poised to continue its strength vis-a-vis the buck in 2018, as oil prices firm (a plus for Canada's energy-focused economy) and the Canadian central bank follows two recent interest rate hikes with further increases within a more aggressive monetary policy stance. Thus, if you're a patient dividend investor, both your quarterly dividend income stream and stock price appreciation could pack a greater punch in the coming years, as your U.S.-listed holdings of Canadian banks increase in value from a currency shift.

For example, if the loonie reverts closer to historical levels of 1.15 to 1.0 "USD" in the coming years, investors in U.S.-listed Canadian stocks will see 10% in additional price appreciation. Returning to parity would essentially represent a 25% appreciation bonus. And keep in mind that dividends reinvested today at current exchange rates will translate into a higher yield should the greenback continue to fall. In sum, opportunities like this are rare. Dividend investors with holding periods of at least two to five years should consider positions in the largest Canadian bank stocks, due to their high dividend yields, overall safety, and potential for juiced returns via currency effects.