Please ensure Javascript is enabled for purposes of website accessibility
Log In Help Join The Motley Fool
Free Article Join Over 1 Million Premium Members And Get More In-Depth Stock Guidance and Research
By Billy Duberstein - Dec 29, 2017 at 6:47AM

This post-IPO earnings report was a blockbuster.

While many well-known, large-cap tech stocks stole the headlines this year, 2017 also saw several promising tech upstarts go public. One of the more recent IPOs was MongoDB (MDB 3.67%), which went public in October. MongoDB should be on every investor's radar because it's a potential disruptor to the massive $45 billion database market.

Enterprise databases store and organize business's most critical data, and while that might not seem very sexy on the surface, the mission-critical nature of databases can be very sexy from an investment point of view.

Recently, MongoDB released its first earnings report and hosted its first conference call with analysts as a public company. Here are the key takeaways. 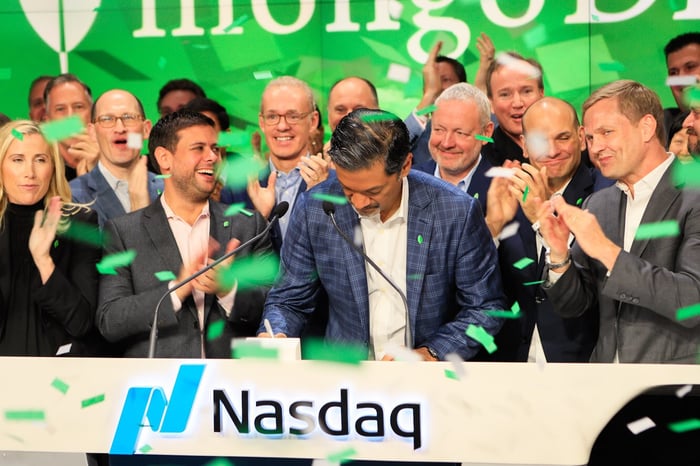 The most important metric for any young tech company is its revenue growth, and on this count, Mongo didn't disappoint. The company grew revenue 57.8% year-over-year in the third quarter, accelerating from an already red hot 50.7% in the first six months of 2017.

This accelerating growth was largely the result of tremendous customer wins. MongoDB had 4,900 customers at the end of the quarter, up a stunning 88% from a year ago. Much of the gains came from its new Atlas database-as-a-service product, hosted in the public cloud (as opposed to the company's more expensive Enterprise Advanced offering). Atlas makes up only 8% of revenues, but Atlas customers grew to over 2,600 in the quarter, a 37% quarter-over-quarter jump. That's 37% in just one quarter.

Like most other technology IPOs, the company continues to lose money, posting operating losses of $24.1 million in the quarter. That was actually bigger than the $19.3 million loss a year ago. And while that is certainly not the trend you would like to see, increased operating expenses are clearly paying off with accelerating customer and revenue growth.

One particularly notable win was the Washington Post Company, which selected MongoDB to manage its online publishing system. According to Mongo CEO Dev Ittycheria, [conference call transcript via Seeking Alpha], "they chose MongoDB Enterprise Advanced after a highly competitive sales process where they closely evaluated a number of other alternatives due to our proven ability to drive increased developer productivity while also helping [meet] high SLAs [service-level agreements] for up time and disaster recovery."

Why is the Washington Post win particularly notable? Because Jeff Bezos, CEO of Amazon, owns The Washington Post newspaper, and while I am sure Bezos doesn't dictate what Post's management picks for its IT systems, Amazon does have its own competing database product called DynamoDB. Therefore, the fact that the Post chose Mongo over Dynamo is certainly telling.

In fact, in a recent interview with SiliconANGLE, Amazon Web Services CEO Andy Jassy said, " ... we built DynamoDB, because our customers really wanted us to have a native, nonrelational database offering, but MongoDB continues to kick butt on top of AWS."

The fact that Amazon Web Services' leadership is proud of their software competitors (albeit those that use Amazon's infrastructure) means specialists such as MongoDB should continue to grow despite big cloud competition. With a $45 billion and growing market, there's clearly room for multiple winners.

As always, MongoDB's continued success requires consistent product improvements, and the company was happy to announce several milestones in the quarter. These include:

Despite cloud giants and start-ups alike vying for a piece of the database industry pie, MongoDB seems well-positioned to succeed in this $45 billion and growing market.