The tax reform bill is good news for retailers, and investors.

The so-called death of brick-and-mortar retail has been greatly exaggerated. Every store is not headed for the scrap heap of history. While it's true that approximately 20 major retailers filed for bankruptcy protection this year, most had struggled for decades. 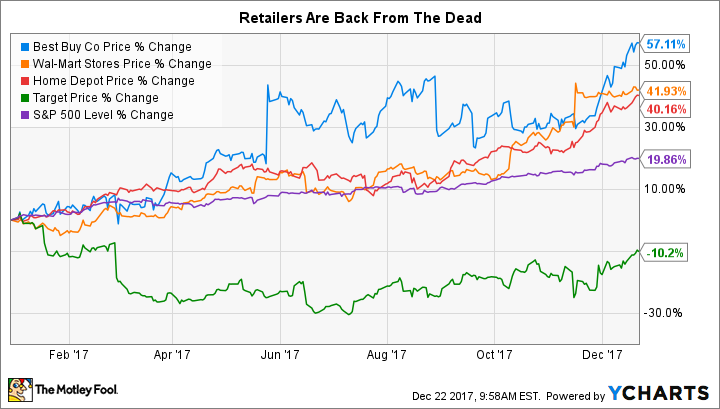 One factor that should strengthen retail's case is the increase in consumer spending. In November, personal consumption expenses increased 0.6% over the prior month, up sharply from October's 0.2% increase and higher than the 0.5% increase economists expected. Retail sales, a more-direct figure for the health of the industry, reported a monthly increase of 0.5% in November, pointing to a strong holiday season.

It's likely for this to continue, at least in the short run, as tax cuts make their way into the economy. Many of the benefits, particularly for lower-income households with a higher propensity to spend, are front-loaded and should show up immediately in consumer and retail spending. Look for retail leaders to report better same-store sales figures in the upcoming year and to be rewarded with share-price increases.

Tax bill is huge for retail

Earlier this year, many people, including myself, feared that the tax bill would negatively impact many retailers. An early provision, the border-adjustment tax (BAT), would have acutely disadvantaged retailers. However, the BAT never made it into the final bill. Instead, it appears retailers will be among the biggest winners from the law. A UBS report done before the final bill passed found retailing would see the third-largest earnings boost, behind the telecom and transportation industries.

The report found that if the corporate tax rate fell to 25%, retailing should see an 11% boost to earnings. The final bill cut the corporate tax rate even further, to 21%, and this tax cut should quickly show up on retailers' bottom lines. The combination of increased spending and lower taxes should boost the overall retail industry.

How to best position within the industry

As a result of 2017's stock run, Home Depot and Wal-Mart now find their valuations stretched when compared to the greater market, with forward price-to-earnings ratios of 22.6 and 20.8, respectively, versus 19.8 for the S&P 500.

Home Depot has been on an extended run; over the last decade the stock has provided investors a 700% total return. Look for that to continue as the company will use its tax savings to plow money into dividends and share buybacks. Wal-Mart has risen on new e-commerce initiatives and will likely continue to rapidly grow its digital channel.

Right now, retailers that are still trading with depressed multiples are more intriguing. Although Best Buy has seen its stock rally nearly 60% year to date, shares of the company still trade at a forward price-to-earnings ratio of 15.7. CEO Hubert Joly has done an admirable job building the company's digital channel and cutting costs. Look for the stock to continue its strong run, aided by lower taxes and multiples expansion.

I'm expecting a big 2018 from Target (TGT -3.47%) with improvement in both the physical and digital channels. To reverse negative trends, the company announced a $7 billion redesign earlier this year. This month the company purchased Shipt, a same-day delivery platform, to bolster its digital commerce business.

It's clear that retail isn't dead. Value investors should take notice of cheap laggards in the sector before Wall Street does.