"How can asphalt save the environment?" That's a question Verizon (NYSE:VZ) has posed on its website promoting Internet of Things (IoT) services. Perhaps a better question, though, is "What does Verizon have to do with asphalt?" As it turns out, the wireless provider thinks getting involved in smart-city construction has a lot of upside, and if cities are known for anything, it's asphalt.

A wireless network under your tires

If you live in the city, you likely have to deal with traffic. That's often accompanied by poor air quality from automobile emissions. According to Verizon, Americans spend over 8 billion hours a year stuck in traffic. And that's not just a waste of time, as a car that idles an hour a day emits 10 pounds of carbon dioxide during the course of a week. 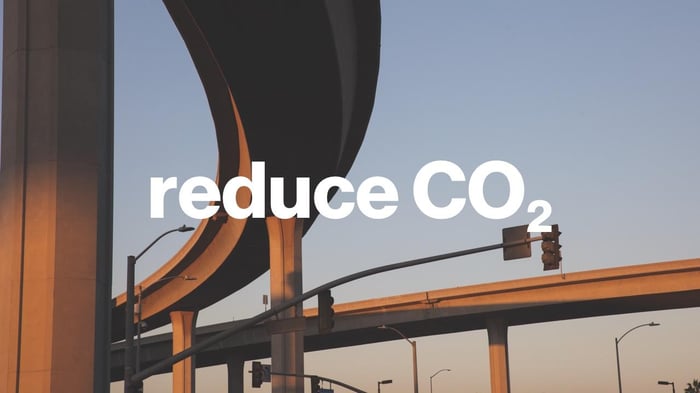 The largest wireless provider in the U.S. thinks it has a solution. The company is embedding sensors into the asphalt on city roads, pairing them with cameras on traffic lights, and connecting the devices to its wireless network to analyze traffic. That data can then be used to help a city adjust traffic light timing and make other transportation infrastructure changes to optimize the flow of traffic.

Verizon thinks that its "smart asphalt" has the potential to significantly reduce fossil fuel emissions. It could also save us time by reducing the amount of traffic stops by up to 44%, according to the company, and save a collective $160 billion a year from costs related to traffic congestion.

Verizon and the smart city

Verizon's IoT business is still a small segment, with over $220 million in sales last quarter compared to $31.7 billion in total revenue. The company has been growing that segment by double digits, though, as wireless networks have become increasingly important to other services outside of mobile phones.

Sacramento , Calif., is one place where Verizon is implementing these new services. The sensors have been placed in city streets and cameras have been installed to help analyze traffic in the state capital, and Verizon announced over the summer of 2017 that it would be spending $100 million on infrastructure to provide Wi-Fi in parks and expand its fiber optic network.

Sacramento will also be one of a handful of cities in which Verizon starts offering 5G network access in 2018. 5G will be more than faster data for smartphones; the aim is for the next-gen network to be a legitimate contender against broadband internet providers for homes and businesses. The technology could also be instrumental in enabling the use of self-driving vehicles, remote healthcare, and smart-city initiatives like internet-connected asphalt.

What all this means

It is still early on in the IoT movement, and Verizon's "smart asphalt" is but one example of how new technology is being implemented in new ways. As Wi-Fi availability expands and network reliability and speeds increase, expect the internet and connection-enabling technology to become a more integral part of our lives.

For Verizon, that means more uses for its telecom network, which is beginning to look more like an internet service provider than anything. If the company is able to demonstrate success in its new smart-city and 5G initiatives, expect its IoT division to grow exponentially and become an increasingly important segment of the overall business.