From a distance, Visa (NYSE:V) and Square (NYSE:SQ) may seem like completely different companies, but they are more similar than you might think. Both are big beneficiaries of the trend toward a cashless society, have phenomenal international opportunities, and are leaders in the financial technology, or fintech, space.

Here's a rundown of the growth opportunities these companies have, how they did in 2017, the difference in risk, and which could be the better buy now. 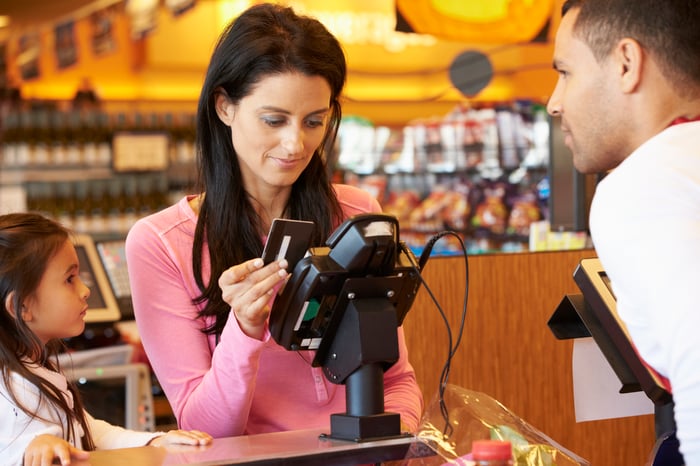 Square has a massive market opportunity

Square's core business is producing affordable payment processing solutions, primarily for small businesses. In simple terms, the idea is that traditional card-processing hardware is prohibitively expensive or bulky for smaller merchants, so Square's solutions are designed to be an inexpensive and often portable way to accept cards.

The company is only in five countries around the world so far, and it's estimated that two-thirds of businesses around the world don't accept cards yet, so this is a big growth opportunity. Worldwide card payment volume is estimated to reach $45 trillion to $55 trillion annually by 2025, and if Square can capture, say, just 5% of this, it would be about 35 times its current payment volume.

In addition, Square has several other businesses that are creating a financial ecosystem for small businesses. Its Square Capital business lending platform is growing rapidly, and its Caviar food-delivery platform and Instant Deposit service are also doing very well.

Visa has more room to grow than you may think

It may seem as if Visa is a mature company -- that is, there's limited room to grow. After all, there are more Visa cards in existence than Mastercard, American Express, and Discover cards combined.

However, there's still a lot of potential for Visa, particularly internationally. Over the past year, its international transaction revenue has grown by 45% on especially strong results from the Visa Europe segment. Longer term, there's still tremendous opportunity in Asia and the Middle East, regions where credit cards still aren't widely accepted. In fact, China just recently opened access to U.S. credit card networks, so this is definitely a development to watch over the next few years.

Also, Visa has the opportunity to capitalize on advances in fintech, such as through its partnership with PayPal. Visa is also a major investor in Square, acquiring a stake in the company before it went public.

2017 was a great year for both companies

Both companies have produced some pretty impressive growth recently. Square's gross payment volume grew by 31% over the past year, and adjusted revenue soared by 45%. Its subscription and service-based revenue grew by an even more impressive 84%, and Square Capital is making business loans at a $1.2 billion annualized rate.

Visa's numbers tell a similar story. Revenue and adjusted net profit both grew by 26% over the past year, and I already mentioned the company's strong international growth. And its payment volume growth of 38% was even more impressive than Square's. Visa also sees its earnings per share growing by a double-digit percentage in 2018.

As a result, Visa was one of the best-performing stocks in the financial sector, up 45% in 2017. Square, on the other hand, delivered phenomenal returns for shareholders. Even after a nasty recent pullback, it's up nearly 160%.

Here's the main reason for the difference, which pretty much sums up the key difference between these companies from an investment standpoint: Visa is a long-established company that has been doing very well, and has been doing even better. Meanwhile, Square has gone from being just another fintech company to being the payment-processing solution for small business. My wife and I go to an artisan market every Saturday, and I'd conservatively say that 80% of the vendors use Square card readers to accept payments.

In a nutshell, these are two companies in completely different stages of maturity, and therefore with two different risk/reward profiles. Visa is unlikely to double in a year, but is also unlikely to get cut in half, while either scenario is quite plausible for Square at this point.

It's tough to call a winner, simply because both of these companies are high-potential stocks with lots of positive momentum.

Visa's international potential makes it an intriguing investment, but shares are trading at their 52-week high and at a P/E of 41, rather high for such a large company, even given its growth rate. Square has the larger market opportunity of the two, but is yet to establish a track record of profitability. However, the stock has pulled back about 30% over the past month or so, giving back all of its post-earnings gains and more after a key analyst downgrade.

To be clear, I don't think investors will go wrong with either stock, but of the two, I'd be a buyer of Square on the dip.