Stocks started out the new year with bang on Tuesday. The Dow Jones Industrial Average (DJINDICES:^DJI) gained over 100 points, the S&P 500 (SNPINDEX:^GSPC) set a record high, and the NASDAQ Composite (NASDAQINDEX:^IXIC) closed above 7,000 for the first time ever.

As for individual stocks, two energy-related companies were in the news today. Westport Fuel Systems (NASDAQ:WPRT) shares rose on a deal to supply natural gas engines into India, and Weatherford International (NYSE: WFT) fell after reversing course on a joint venture. 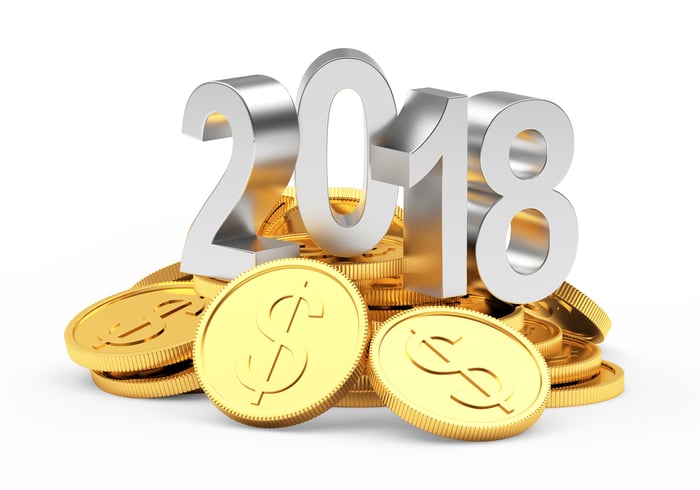 The new regulations, called Bharat Stage VI, are equivalent to the Euro VI standards already in effect in Europe, and are set to take effect in India in April 2020. Compared with the existing standard in India, the new engines will reduce nitrous oxide emissions by 87% and methane emissions by 55%. Westport, a specialist in vehicle engines powered by natural gas, has had a partnership with Tata since 2012.

"Tata Motors is a leader in heavy duty natural gas vehicles in the Indian market and a leading vehicle and engine manufacturer globally," said Maurizio Grando, executive vice president of Westport Fuel Systems, in the press release. "Our longstanding partnership combined with our position as a technology leader and our global footprint allows us to commercialize unique natural gas engine technologies that provide a competitive solution for our OEM partner."

Westport stock got crushed from mid-2013 to last spring as falling diesel fuel prices largely erased the cost benefits of natural gas engines in the U.S., hurting domestic sales and causing the company to rack up large losses. But the company is making a comeback, thanks to a significant merger and focus on selling the environmental benefits of natural gas engines into key international markets. The stock more than tripled in 2017.

The stock of Swiss oil-field services company Weatherford tumbled 17% in reaction to a recent announcement that the company was terminating a joint venture with Schlumberger and selling its U.S. pressure pumping and pump-down perforating assets. Schlumberger will pay $430 million for the business, including supplier and customer contracts and about 100 employees.

"Although not as originally anticipated, this transaction delivers cash proceeds that enable our Company to begin the deleveraging process and, coupled with our transformation plans, will lead to a leaner organization with lower debt and significantly higher profit margins," said Weatherford President and CEO Mark A. McCollum in the press release.

The joint venture, called OneStim, was announced last March and was intended to create some scale in the U.S. fracking business to help it compete better with Halliburton. The news at the time caused Weatherford's stock to jump, but shares have slid in the months since then, as the company has continued to report large operating cash deficits. Weatherford investors were clearly not pleased with the sudden and unexpected reversal of course despite the need for the company to address its huge debt, but those of Schlumberger approved of the price that company was getting for some potentially strategic assets, bidding up the shares 3.2%.