MannKind (NASDAQ: MNKD) is up 13% at 3:40 p.m. EST Tuesday, but seemingly not on news issued by the biotech. While shares of MannKind often seem to move at the whim of day traders, today's bump higher may be tied to a report that prescriptions of Afrezza topped 500 last week.

Prescriptions haven't reached that level since back in 2015 when MannKind's marketing partner Sanofi (NASDAQ:SNY) was selling the inhaled insulin product, but even now that MannKind collects all the sales, 500 prescriptions won't generate very much revenue for the beleaguered biotech. At that run rate, MannKind would bring in around $13 million for the year. Presumably, prescriptions will continue to tick higher, but given the low base, even doubling this year wouldn't cover the company's cash burn, which came in at $23 million in the third quarter of 2017 alone. 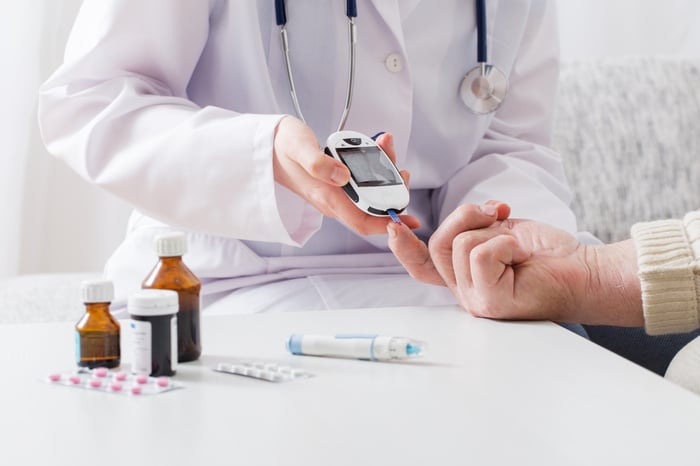 MannKind got a label change at the beginning of October that describes how long it takes for the drug to peak and when it leaves the body. Afrezza is arguably the best fast-acting insulin given its quick on-and-off rate, mimicking natural insulin better than the injected version. Unfortunately, being able to describe those on-and-off rates to doctors with the label change hasn't accelerated sales in any appreciable manner, presumably because doctors are still concerned about potential side effects of delivering insulin via the lungs.

While prescriptions are headed in the right direction, investors still need to be concerned with the company's cash burn rate relative to its revenue growth rate. With profitability still in the distant future, MannKind will likely need to raise additional capital, possibly through a secondary offering, which will dilute shares even further.