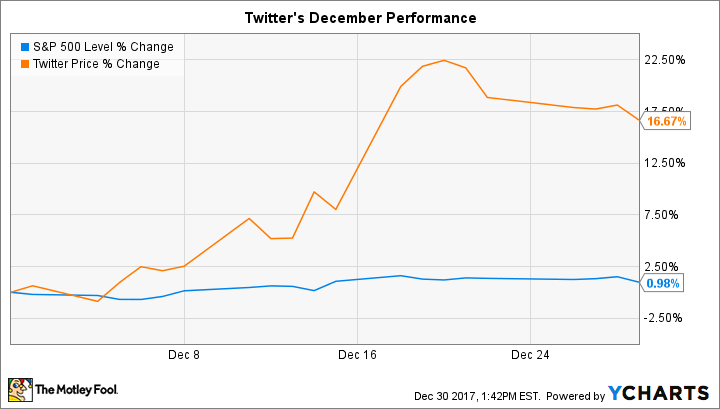 The surge helped shareholders finish the year up 47%, which wasn't far from the 53% increase that Facebook (NASDAQ:FB) enjoyed in 2017.

Investors are growing more optimistic that Twitter will soon find answers to its struggles with audience size and monetization. In fact, the stock jumped last month in response to two bullish upgrades by Wall Street analysts, both of which believed shares could surge in the months ahead.

Twitter's most recent quarterly report showed a 4% decline in revenue and a net loss of $103 million, and those figures didn't hold a candle to Facebook's 49% revenue spike and 79% jump in earnings to $4.7 billion. Still, the results included good news for the micro blogging platform as user engagement grew in response to several improvements that executives made to the service.

Twitter is hoping that the engagement uptick will be followed by faster growth in its audience size in the coming quarters, which is necessary if it wants to eventually rival Facebook's 2 billion user reach. Investors will also be watching for evidence that its data licensing business can lessen Twitter's dependence on the advertising market while pushing it closer to bottom line profitability -- perhaps as early as fiscal 2018.