PayPal Holdings (NASDAQ:PYPL) is benefiting from the growing demand for mobile financial transactions, and the company is staying ahead of its competition by continually investing in its payments platform, expanding into new services, and forging new partnerships in the payments market.

PayPal had a great year in 2017 as it beat analysts' consensus earnings estimates for the first three quarters of the year (PayPal hasn't reported its fourth quarter yet), and the company is on pace to surpass its own estimates for customer growth in the year.

PayPal's growth in 2017, and its growing opportunities with mobile payments, mean that 2018 is shaping up to be a great year for the company. Let's take a closer look at why. 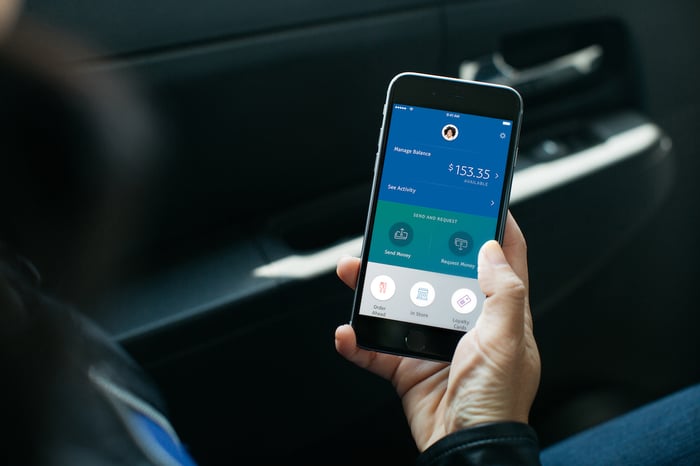 Get the champagne ready

In the third quarter, PayPal grew its active customer accounts by 8.2 million, bringing the digital payment leader's total customer base to 218 million users. The quarter's growth led to PayPal's management increasing its full-year 2017 estimates for net new user active accounts to 30 million, up from previous estimates of 25 million.

Users made 1.9 billion payment transactions in the quarter, a 26% increase year over year, which equaled $114 billion in total payment volume (or TPV). The company also increased its mobile payments by 54% in the quarter, to $40 billion.

PayPal's ability to increase its mobile payments is especially notable because of consumers' ongoing shift to this service. PayPal has successfully forged strong mobile payment partnerships over the past year, including a recent partnership with Facebook that allows Facebook Messenger users to send money to each other in its app using PayPal. Tech companies, credit card companies, and banks have realized that they can work with PayPal, instead of creating their own exclusive platforms, and that's spurred more growth for PayPal's mobile payments.

And as good as 2017 was for PayPal's mobile payment strategy, there are a handful of reasons why 2018 will keep the party going.

Aside from its current user growth and partnerships, PayPal also has one very promising opportunity that it's currently building out: peer-to-peer payments.

PayPal owns the popular peer-to-peer payment app Venmo, and over the 12 months ending in September Venmo users sent $30 billion worth of payments to each other -- a 106% jump from the previous 12 months.

Peer-to-peer payments are expected to grow from $120 billion in 2017 to $244 billion in 2021, and PayPal's wise purchase of Venmo back in 2015 has put the company in a perfect position to continue benefiting. Until recently, PayPal hadn't yet monetized the Venmo app, but the company made a few changes toward the end of 2017 that should help it make money from it going forward.

In October, PayPal announced that 2 million retail locations would now be able to accept payments from their customers using the Venmo app. That  should allow Venmo to start charging a small transaction fee to retailers while offering a new service for its Venmo users. The company said it will also soon offer the option to transfer money from Venmo accounts to bank accounts instantly (it usually takes several days) for $0.25 per transaction, which will also help PayPal make money from Venmo.

PayPal's strong user growth, new partnerships, and new opportunities with Venmo should put the company in a very strong position in 2018. The company's management said on the latest earnings call that it expects revenue and adjusted operating income to grow by about 20% year over year for the full-year 2018, and for the company's total payment volume to grow in the range of mid- to high 20%. Whether this year will be PayPal's best ever remains to be seen, but the company is certainly well-positioned to make it a great one.