Shake Shack (NYSE:SHAK) has expanded at a faster rate than investors -- and even the restaurant itself -- were expecting. But the looming question is: Can it achieve healthy comp sales across all of its shiny new Shacks?

The fast-casual burger chain saw its shares increase about 21% in 2017, thanks to an end-of-the-year boost from third-quarter earnings after hitting a low point in September. That's slightly better than the 19% the S&P 500 gained in the same time period. But the recent uptick in the stock is still a far cry from the highs it saw right after its initial public offering in 2015.

To determine whether Shake Shack is in for a record 2018, let's take a closer look at where the "better burger" chain stands at the end of 2017. 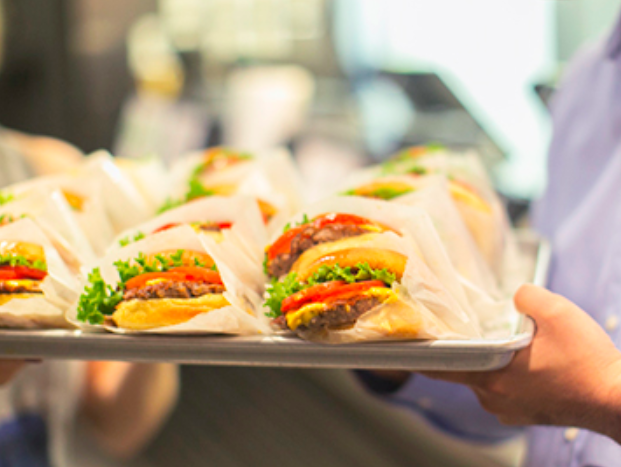 The good news for Shake Shack investors is that the company's revenue has been on a steady upward slope since its 2015 IPO.

Last month, the company reported third-quarter revenue that rose 27% year over year to $94.6 million, which just beat out analyst expectations for $94.5 million. Earnings also beat estimates at $0.17 per share, with only $0.15 per share expected.

Investors were impressed enough with the results to send Shake Shack shares up to a new 52-week high of $46.90. While the stock has given back some of those gains, the $43-per-share price is still higher than the price below $40 that we became accustomed to over the past year.

On top of the top- and bottom-line beats, Shack Shack also raised its full-year revenue guidance for 2017 to at least $354 million, up from its previous forecast of at least $351 million.

That's some solid ground for Shake Shack to stand on in 2018.

Of course, the big news with Shake Shack is how many stores it's been opening recently. In 2017, the company expects to report 24 to 26 new Shake Shacks in the U.S. and 18 net new licensed Shacks overseas. Shake Shack currently has 143 stores, with 79 being company-owned and 64 licensed. While it might seem like good news to see a company expanding at a faster rate than it originally anticipated, some investors aren't happy. 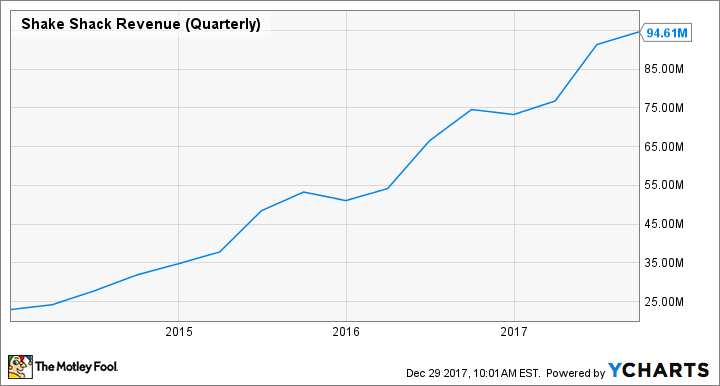 Shake Shack announced in its latest earnings call that it was expecting to open between 32 and 35 new domestic stores in 2018.

I imagine Shake Shack was a bit nervous to make this announcement, considering that its comparable-store sales have been down, naturally leading investors to question why the company continues to churn out new stores.

This past quarter, comps dropped 1.6%. While that's better than the 2.6% decline analysts were expecting, it's also the third quarter in a row of negative comps. Thus, although revenue has been rising, it's mainly due to the high rate of new store openings rather than existing-store sales.

This is a worrisome data point for investors who wonder about new stores cannibalizing existing-store sales even further in 2018. Last year, comps were up 2.9% in the third quarter.

But it's not just new Shake Shack stores that are cutting into its comps. Multiple "better burger" chains like The Habit Restaurants (NASDAQ:HABT), Wayback Burgers, Umami Burger, and Five Guys are expanding rapidly too.

In addition to the year-over-year drop in comps, average weekly sales also plunged about 12% to $91,000 this quarter. Shake Shack attributed the drop to the deluge of new stores popping up: "It's important to recognize the impact that these newer Shacks will have on the overall company operation now and over time, while we continue to grow overall revenue in absolute terms," Shake Shack CEO Randy Garutti said in the earnings call. But while negative comps might be a natural part of a restaurant's expansion plan, surely three quarters of negative comps in a row aren't part of the plan.

It's also important to notice overall restaurant trends. For example, "better burger" places are no longer something special. You no longer have to take the subway to Madison Square Park to get a decent burger at Shake Shack.

In addition, fine-dining sales have shown positive growth this year, while fast-casual restaurants have shown a decline in sales, as people expect restaurants to give them an experience that makes going out worth the trip. Surprisingly, fast food also did well in 2017, as people seem to appreciate a cheap value meal as much as a more expensive, exciting food experience.

Those are not good signs for Shake Shack going into 2018. 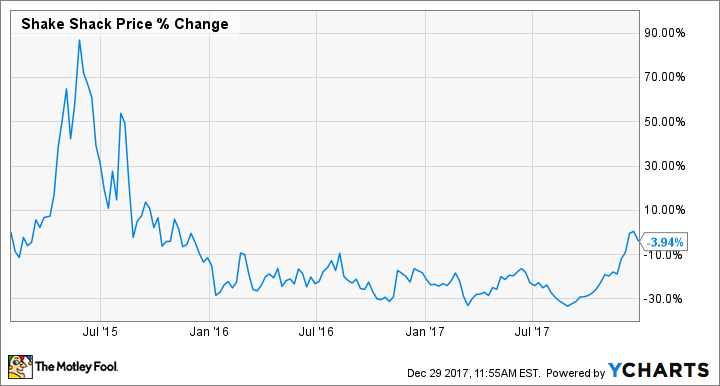 The worst part for many investors is that Shake Shack is trading at 69 times trailing earnings and at 84 times next year's estimates. That seems too good to be true when the company's existing stores are posting negative comps, competition is heating up, and the overall restaurant trend is heading away from fast-casual burger chains.

The bottom line is that Shake Shack isn't a bad business: The food is great and fast-casual isn't going away anytime soon. But will 2018 be its best year ever? Not in my opinion. It seems highly unlikely that the stock can beat the numbers it was pulling in the spring of 2015, when it went above $90.

Shake Shack has been on a steady upward climb over the past three years. I think that could continue into 2018, but won't be surprised if its price suddenly drops -- a few more unfavorable comps released in the next year could scare off investors who already have one foot out the door.