Ever since carmaker Tesla (NASDAQ:TSLA) announced in mid-November that it would debut an electric semi, orders for the yet-to-be-released truck have been piling up from some of the most well-known companies worldwide.

Tesla's event to debut the big rig provided some intriguing details about the operational specs for the vehicle. The Tesla Semi will go from 0 to 60 miles per hour in 20 seconds with an 80,000-pound load, a feat it says a diesel truck takes a minute to achieve. The truck will also reportedly climb a 5% grade at 65 mph, besting a diesel's top speed of 45 mph under similar conditions. Most important, Tesla says that over a million miles, the vehicle will save owners $200,000 in fuel alone.

These specs are attracting some of the biggest corporations in the world -- and their ranks are swelling. 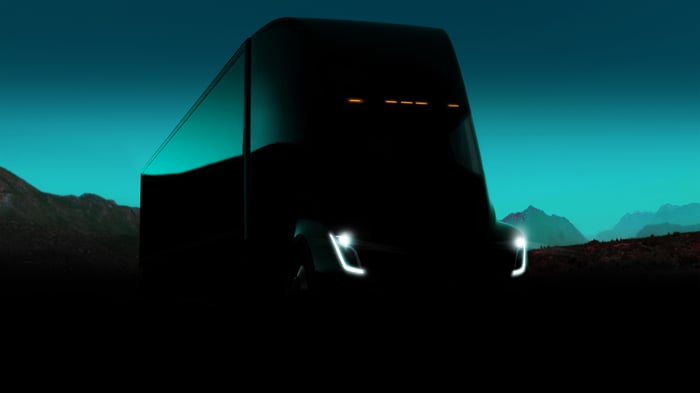 Here's a rundown of the reported orders so far, and why the actual numbers may be much, much higher:

Companies preordering the Tesla semi have cited a number of reasons for being among the first to join the tractor-trailer revolution.

Shipping giant UPS has the highest confirmed number of truck preorders to date, at 125. The company, which says it has been "testing and implementing new technologies" for more than a century, provided Tesla with real-world trucking data from its fleet of more than 8,500 vehicles worldwide. UPS said the Tesla truck order will help it achieve its goal of reducing its greenhouse-gas emissions by 12% by 2025.

PepsiCo, maker of the Pepsi and Frito-Lay brands, plans to use Tesla trucks to transport beverages and snack foods between its manufacturing and distribution facilities, while also making deliveries to retailers. The company is looking to reduce fuel costs and to cut emissions by at least 20% by 2030.

Food distribution company Sysco, which serves restaurants, hotels, and stadiums, says it is looking forward to "positive environmental impacts," as well as reduced fuel and maintenance costs. Sysco believes the Tesla trucks will provide a better driving experience and "significantly reduce the cost of cargo transport."

Alcoholic-beverage purveyor Anheuser-Busch said it's always looking for ways to make its supply chain "more sustainable, efficient, and innovative." The company believes these new trucks will help it achieve those goals, while improving safety and "lowering our environmental impact."

John Roberts, president and chief executive officer at J.B. Hunt Transport Services, said, "We believe electric trucks will be most beneficial on local and dray routes, and we look forward to utilizing this new, sustainable technology." Early last year, the company announced " a five-year, $500 million commitment to enhancing operating systems, developing cloud infrastructure, and creating innovative and disruptive technologies." It sees the Tesla truck as delivering on part of that initiative.

It should be noted that the number of trucks preordered by each company is inconsequential to the overall size of their total fleets. Rather, the size of the orders indicates that the companies are eager to test the Teslas as a new addition, rather than a large-scale overhaul to their existing operations. Further additions may come if the initial slate of vehicles proves valuable in their initial assessments.

Are there many more orders than we know?

Adam Jonas, an analyst with Morgan Stanley, cited an Instagram post by a landscaping company showing its reservation number of EO000001230. He sees this as potentially suggesting that Tesla has orders for 1,230 of the trucks. He admitted that it was possible that the company may have reserved the first 1,000 numbers for the more expensive Founders Series limited-edition truck, putting the total reservations at only a few hundred.

Not everyone is sold. The Tesla semi faces an uphill battle because of its higher price tag, design concerns, and competition. On the other hand, there are reports of government subsidies available from the province of Ontario, amounting to 75,000 Canadian dollars (US$59,000) to purchase the vehicle. Subsidies and fuel savings may counter some of the price disparities.

There is also still some question as to whether Tesla can get beyond the current production issues with its Model 3. Tesla CEO Elon Musk said in July that "We're going to go through at least six months of production hell." He reiterated in October that the company was "deep in production hell," though the issues were slowly coming under control. You have to wonder if the company will experience similar issues with the semi truck when it enters mass production.

Tesla has long dealt with detractors and naysayers; the fact that some of the biggest corporations in the world are climbing aboard to try out Tesla's new truck could be an indication that they know something we don't. Looking at what the company has achieved in a few short years, I wouldn't bet against them.