Investing should be a numbers game. You evaluate the merits of an asset based on its financials, and then determine if the current price is worth paying. Unfortunately, the world of investing is rife with myths and urban legends that can detract investors from making the best decisions. One asset class that possibly has the most myths surrounding it is gold. It has been around for thousands of years, but we still haven't quite figured out how it fits best in an investment portfolio.

We asked three Motley Fool investors to debunk an investing myth surrounding gold so you can make better decisions. Here's what they had to say. 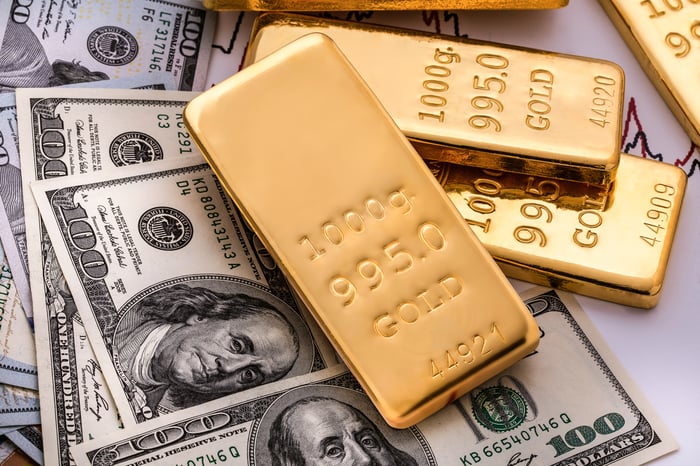 Gold isn't the hedge against inflation that some think

Tyler Crowe: A common investing belief is that gold is a good hedge against inflation. That means anytime there's a period of rising interest rates, investors should allocate capital to gold.

If you dig into the data, though, that investment hasn't gone as well as one might expect. Authors Robert Johnson and Luis Garcia-Feijoo of the book Invest with the Fed went through the returns of stocks and gold in various interest rate environments from 1972, when the U.S. dollar was taken off the gold standard, to 2013. Here's what they found:

Sure, the expected returns from stocks in a period of rising interest rates are considerably lower than times when rates are flat or falling, but that doesn't necessarily mean that gold is a more attractive investment than stocks when it happens. The only argument that this could still be the case is that this is only 40 years of data, and it could be too small of a sample size for this investment theory to show up.

There are reasons to invest in gold versus stocks or other assets, but the theory that investors should go to gold when interest rates are on the rise doesn't seem to hold water.

Reuben Gregg Brewer: Most precious-metals miners don't have particularly enticing dividend histories. That's driven by the mining business model, which produce huge profits when gold and silver prices are high, but can lead to big losses when the prices of these often-volatile commodities plunge. The costs of mining simply can't adjust quickly enough to falling prices, leading to weak margins.

But that's not the case with streaming companies like Royal Gold (NASDAQ:RGLD). Streamers provide cash upfront to miners for the right to buy gold and silver at reduced rates in the future. That locks in wide margins in both good times and bad. As an example, Royal Gold has a deal with mining giant Barrick Gold (NYSE:GOLD) at the Pueblo Viejo Mine that allows it to buy gold and silver at 30% of the spot price until certain production targets are met, and 60% thereafter. Its costs will never go above the spot price.

That backdrop helps explain how Royal Gold has managed to increase its dividend every single year for 17 consecutive years. The average annual growth rate of the last decade was roughly 15% a year. That's an incredible record for any company, let alone one that operates in the precious-metals industry.

To be fair, Royal Gold's roughly 1.2% yield probably won't excite you. But if you're an income investor looking to hold some gold to help diversify your portfolio, you can, indeed, find reliable dividends in the precious-metals space.

Sean O'Reilly: If there's one myth that surrounds investing in gold, it's that only speculators dabble in trading and owning the precious metal. Like all myths, it's grounded in some truth.

Gold futures are a favorite staple of commodity traders on the futures markets. The world's most famous investor, Warren Buffett, famously eschews gold. But to other successful investors -- many of whom are billionaires in their own right -- gold can and should be owned in the right circumstances.

Take Ray Dalio, founder of the world's biggest hedge fund, Bridgewater Associates. Just a few months ago, Dalio went on record saying that markets are ignoring rising political risks. He cited potential conflict between the United States and North Korea as an example.

What's a man who runs a $160 billion hedge fund to do should bombs start flying? Buy gold.

If things go badly with North Korea, or if the political situation in the U.S. continues to worsen, Dalio says an investor would want up to 5%-10% of a portfolio in gold. He's putting his money where his mouth is. According to the latest SEC filings, Dalio increased his holdings in the SPDR Gold Trust (NYSEMKT:GLD) by a whopping 575% in Q3, to $473 million.

Dalio isn't alone. Hedge-fund veteran Stanley Druckenmiller, who served as the lead portfolio manager at George Soros' Quantum Fund throughout the 1990s, thinks of gold as a currency.

Of course, investors don't want to hold any currency for long. But if stocks and bonds are unattractive, one should sit on their hands. Druckenmiller is happy to own gold as a "parking spot." In an interview with Bloomberg in February 2017, Druckenmiller stated: "I wanted to own some currency and no country wants its currency to strengthen... gold was down a lot, so I bought it."

The world's smartest investors use gold as an insurance policy. In addition, gold producers are often found in their portfolios. Druckenmiller's old boss, Soros, has recently held shares in Barrick Gold.

While it may not be as profitable as owning dividend-paying stocks in the long run, gold isn't just for speculators. It's also another option that the world's top investors use to their advantage.