The Coca-Cola Company's (NYSE:KO) stock price chart in 2017 was a visual representation of ambiguity. 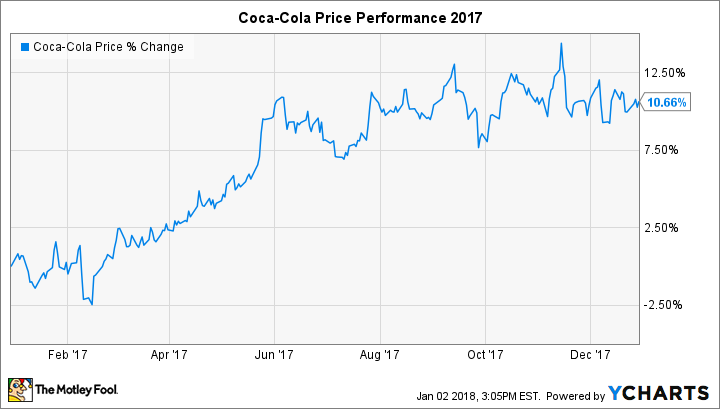 After a decent start to the year, Coca-Cola flatlined in the back half of 2017, as if in a trance. It's curious that its stock has spent the last six months hovering around $45.50 per share, especially as a strong equities market seems to lift even mediocre companies to new highs each trading week.

Of course, investors are currently ambivalent about Coca-Cola. They're uneasy about the weight of traditional carbonated soft drinks (CSDs) in Coca-Cola's portfolio. Moreover, they're impatient for the organization to resume meaningful revenue growth as it revamps its beverage offerings to suit contemporary taste and ingredient preferences.

In addition, investors are also still gauging the long-term effects of Coca-Cola's massive effort to refranchise its bottling operations. They won't have much longer to wait: In late 2017, the organization completed the sale of all U.S. bottling operations.

Signs of value for alert investors

When a stock falls into limbo, it never hurts to scour the organization's financial statements for insight. Some hints of what may lie ahead for Coca-Cola can be found in the company's balance sheet. As Coca-Cola has sold off its bottling operations, it's also removed the goodwill, bottlers' franchise rights, and other intangible assets associated with these operations from its asset ledger. 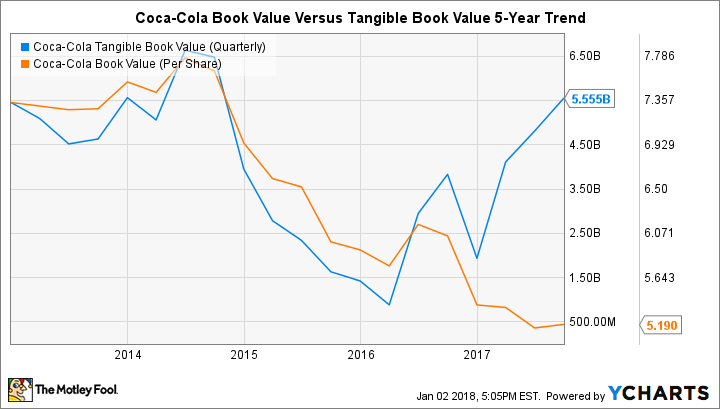 Between year-end 2014 and the third quarter of 2017, Coca-Cola reduced its total intangible assets (including goodwill) from $26.4 billion to $16.5 billion. During the same time, it's increased equity investments (via an unending stream of brand acquisitions) from $9.9 billion to $21.6 billion.

One way to think of this is that Coca-Cola has swapped roughly $10 billion on its balance sheet out of intangible assets, like trademarks and bottling rights, and into hard-dollar investments in brands, ranging from Coke's interest in Monster Beverage Company to its most recent notable acquisition of Topo Chico Mineral Water.

While refranchising has boosted tangible book value, shareholders may still fret that the company's most favored investor attributes might disappear. Long revered for its stellar cash flow, Coca-Cola has rewarded shareholders in the form of an ample dividend (currently yielding 3.2%) and handsome share buybacks over the years.

Any worries about a lighter capital footprint's effect on cash are likely unfounded. It appears that the organization will continue to generate vigorous operating cash flow in the future. In fact, while revenue has decreased 14% in the first three reported quarters of 2017 due to refranchising, cash flow productivity has remained level.

In other words, Coca-Cola converted 21.1 cents of each revenue dollar to operating cash in the first three quarters of 2017, versus 20.6 cents per revenue dollar in the comparable 2016 period. Coca-Cola remains one of the most reliable cash cows among global multinationals, and I discussed its cash productivity in more depth in a recent analysis.

Coca-Cola's slimmer footprint and focus on marketing a wider array of beverages is beginning to reveal progress. In the company's most recently reported quarter, organic revenue increased 4%, a significant improvement over the flattish growth of recent quarters. In addition, operating margin improved by 400 basis points (roughly 4 percentage points).

Indeed, going forward, Coca-Cola projects that it will be a vastly more profitable company. The company promises that by 2020, its transition out of bottling will result in annual operating income margin of 35%. That's 12 percentage points above its current profitability levels.

It's useful to place this imminent margin improvement in the context of not only portfolio diversification but also product reformulation. Notable examples of revamped CSDs in 2017 included the extremely successful launch of Coke Zero Sugar, and a global relaunch of best-selling soft-drink brand Fanta, which boasted both a new recipe and a reduction of added sugar. Within a few years, Coca-Cola could conceivably begin to derive soft-drink volume growth from reformulations. While buyers of its stock pause, Coca-Cola is producing tangible transformation. Of course, one investor's ambivalence is another's buying opportunity.