A run-down of updated strategic priorities Coca-Cola shared with its shareholders during its recent investor day conference.

Last week, The Coca-Cola Company (KO -1.96%) held its first investor day conference in seven years. The forum gave CEO James Quincey an opportunity to discuss broad changes he's implemented since taking over from former CEO Muhtar Kent in May of this year.

In the first of this three-part article series covering the conference, we'll look at shifting priorities as Coca-Cola begins life as a less capital-intensive organization following the extensive refranchising of its bottling investments. 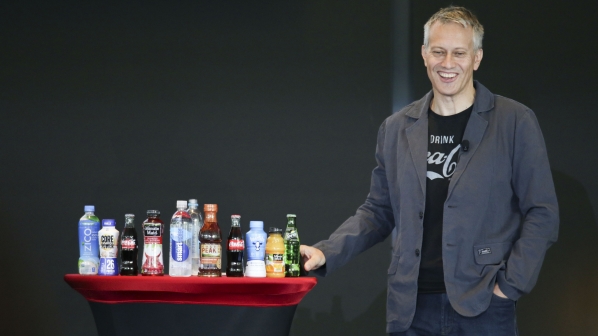 In his prepared remarks, Quincey reinforced a theme he's discussed a few times this year: the need for Coca-Cola to become a "total beverage company." The CEO relayed that Coca-Cola wants to be involved in each of the eight beverages global consumers drink on average each day.

Quincey predicted that the global beverages market will grow at a compound annual growth rate of 4% through 2020, creating over $150 billion of total market opportunity. He also asserted that Coca-Cola's own growth rate would follow or exceed the market's, and he promised annual organic revenue growth of 4% to 6% over the same time period.

How does Coca-Cola intend to outpace the market? Here's a graphic from Quincey's presentation that outlines the five broad strategies the company is employing to accelerate growth.

These strategies should already be familiar to those who invest in or follow Coca-Cola. Creating beverages to suit contemporary tastes, employing data-driven revenue growth management, unlocking value in part by refranchising bottling operations, expanding the company's digital ecosystem, and empowering its people -- none of these themes are brand new to key stakeholders, including shareholders and employees.

Yet some priorities in how the world's largest non-alcoholic beverage company chases growth have clearly shifted. Quincey signaled the following three shifts.

Value, rather than volume, is key

The company is de-emphasizing a long-held objective of growth through the sheer volume of products sold. In the future, it will instead aim to move slightly higher on the customer value chain by seeking price and packaging advantages.

In the Muhtar Kent years, volume was one of the most important metrics the company evaluated itself on. And even as consumers opt for smaller portions of sparkling beverages, and Coca-Cola explores premium beverages such as spritzers, the need for healthy volume will still be honored. But revenue, whether through volume, pricing, mix, or a combination of all three, will now receive the greatest attention in most geographic regions Coca-Cola operates in.

Leadership in beverage categories is no longer good enough

In essence, Coca-Cola will measure brand leadership by additional quantified benchmarks that move beyond case volume, with the objective of achieving higher gross margin.

Product launches will get smaller

Quincey devoted a good deal of time to discussing Coca-Cola's need to be a more agile organization. To be honest, I've yet to come across a company of Coca-Cola's scale and market strength that doesn't also fervently discuss this need. Coke's new CEO assured investors that they would see more innovation, experimentation, and real-time adjustments when it comes to beverage launches through 2020. To quote Quincey:

In the past, we would see ourselves more like the set-piece battles. You prepare for a very long period of time for a product launch; you try and make it perfect and you go for it, and that means it took a long time and you did relatively few of them and you bet big on whether it will work or not. The future is not going to be like that. We must be much more agile, get things to market quicker, maybe smaller, test, learn; if they don't work, they don't work; move on. If they do, take them to the next stage.

Of course, creating an environment in which Coca-Cola can successfully nurture tomorrow's billion-dollar brands, while maintaining market share among its most successful labels, requires structure and process. In the following article, we'll analyze the internal narrative approach Coca-Cola is taking to ensure it can serve both priorities simultaneously.