Natural gas pipeline giant Kinder Morgan (NYSE:KMI) has been a terrible investment since re-emerging as a public company in 2011, given that the stock is down nearly 40% over that timeframe and has still returned a negative 22.5% after factoring in dividends. But just because it hasn't created value for investors in the recent past doesn't mean it won't in the future.

In fact, the next few years look bright for this company, since it expects to increase its dividend by a peer-leading 36% compound annual rate through 2020 while also buying back as much as $2 billion of its dirt-cheap stock. As a result, it could deliver market-crushing returns in the coming years. However, it would have to keep that up for quite some time to turn a small initial investment into $1 million. 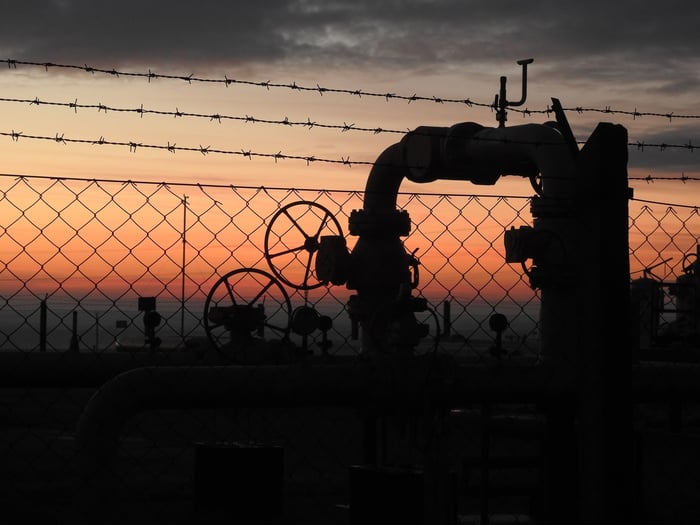 The odds that Kinder Morgan will make you a millionaire

While Kinder Morgan hasn't made investors any money in recent years, that appears poised to change in 2018. For starters, while the company's stock has declined in value over the years, its underlying business has performed well. Distributable cash flow, which is the money the company could pay out in dividends, has increased from $1.22 per share in 2011 to an anticipated $2.05 per share in 2018. While this year's level will be a bit below the $2.14 per share it pulled in during 2015, the company has still grown significantly over the past few years. In fact, because it has increased cash flow while the stock has declined in value, shares currently trade at just 9.2 times 2018's cash flow, which is a massive discount to the roughly 20 times cash flow it fetched at its peak. Shares are therefore currently about 40% below the peer group average multiple of 14.9 times cash flow.

If the stock just reverts closer to the peer group average, it would enable investors to earn a jaw-dropping return in the near term. Add to that the fact that Kinder Morgan pays a 2.7% dividend, which should increase by 60% this year and at a 25% rate in 2019 and 2020, and the company could fuel significant total returns to investors even if it didn't grow.

That said, the company has more than $12 billion of high-return expansion projects in development, which should increase earnings more than 20% over the next few years. That combination of an improving valuation, an expanding dividend, and growing profits could enable Kinder Morgan to deliver market-smashing returns over the next several years.

However, for Kinder Morgan to turn $1,000 into $1 million, it would need to keep up that pace for another 40 years. That will be tough to accomplish, since the pipeline industry isn't a hyper-growth sector. While North America needs to build roughly $546 billion of new oil and gas infrastructure through 2035, according to one study, growth past that point is uncertain, since the world is slowly moving away from fossil fuels. According to the latest long-term forecast by the International Energy Agency, global oil demand could peak around 2040, which would significantly reduce the need for more energy infrastructure, cutting into Kinder Morgan's growth prospects. That makes it less likely that the company can grow at a fast enough pace to deliver market-beating returns for decades to come unless it eventually pivots toward renewables.

Kinder Morgan's stock appears poised to rebound sharply in the coming years, fueled by growing cash flow and a rapidly rising dividend, which could help push its valuation closer to its peer group average. But given the shift away from fossil fuels, it will be hard for the company to continue delivering market-beating returns in the decades ahead, which is what's needed to turn a small investment into $1 million. As a result, the only way Kinder Morgan becomes a millionaire-maker stock is if an investor started off with a six-figure investment.