Last year was outstanding for the casino industry: Most of the industry's major operators beat the S&P 500. Penn National Gaming (NASDAQ:PENN) was the biggest winner, due both to its acquisition of Pinnacle Entertainment and its continued operational improvements. Wynn Resorts (NASDAQ:WYNN), one of my picks a year ago, and Melco Resorts (NASDAQ:MLCO) were also up over 80% on the year.

The big driver behind the rise in casino stocks was a recovery in Macau's gaming market. Casino revenues in the Chinese territory rose 19.1% in 2017 to $33.1 billion, and the VIP market finally showed some renewed life after a few years during which a Chinese government crackdown on corruption and conspicuous luxury drove the wealthy away from its high-stakes tables. Now, as the calendar turns to 2018, the casino industry may offer some unique values to investors. 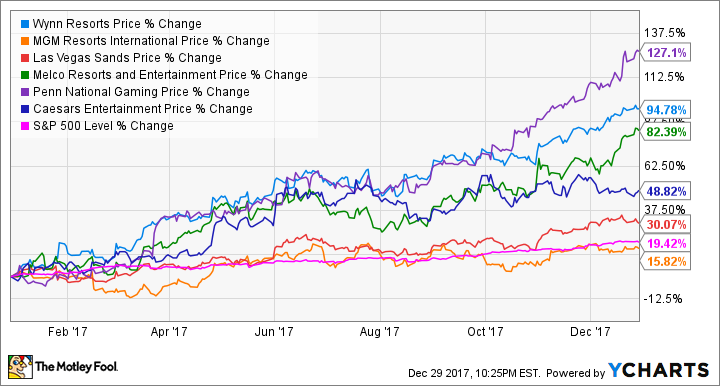 What goes up... keeps going up?

I mentioned that Macau's gaming revenues were up in 2017; that trend should continue into 2018. Regulatory controls on players from China appear to be easing, and mid-market consumers looking for entertainment have been increasingly making Macau their destination of choice.

If Macau's gaming revenue continues to rise, the companies with the most to gain are Wynn, Las Vegas Sands, and Melco Resorts. But there's risk in being blindly bullish on Macau's growth. The revenue chart there can turn on a dime if the Chinese economy slows or if the leadership in Beijing decides to restrict visitation or money flowing to Macau.

On top of the risks to the overall Macau market, new properties from MGM Resorts (NYSE:MGM) and SJM are scheduled to open there in 2018. When you look at the potential market dilution, and the premiums that investors are paying for Macau-centric stocks (which I'll cover in a monemt), there's reason to be skeptical about the prospects of 2017's winners continuing their upward runs. 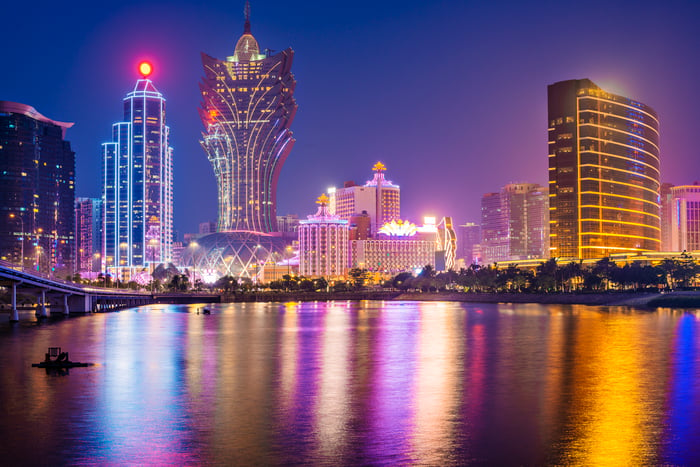 For decades, the casino industry has been in growth mode. But that pattern is largely over; in 2018, there just aren't a lot of growth opportunities to be had. Macau's market is limited by government regulations that cap both the number of casinos and the total numbers of gaming tables. There also aren't many meaningful casino resorts set to be completed in the next year in the U.S. or Asia.

One company that will complete an important resort in 2018 is MGM Resorts. It's putting the finishing touches on MGM Cotai, located between Wynn Palace and Sands Cotai Central in the heart of Cotai. It could add between $500 million and $1 billion in EBITDA to the company, a sizable impact even for a business the size of MGM Resorts.

Japan, which recently opened itself up to casino gaming, presents the other big potential opportunity, and bids to build megaresorts there may open up in 2018. But no Japanese resort will be completed until at least 2021, and it's unclear both how many will be built and by whom. So for the next few years, most gaming companies will rely on their existing properties for growth.

The best value in casino stocks

With Macau-focused casino stocks trading for a premium (as measured by the enterprise-value-to-EBITDA ratio), I think the best value for 2018 is MGM Resorts. The MGM Cotai will open sometime mid-year, which will keep its bottom line growing. It also has a stable of consistent cash flows from Las Vegas, where it's one of the biggest casino owners. It's also a better value today (again, measured by EV-to-EBITDA ratio) than Wynn, Melco, or Las Vegas Sands. 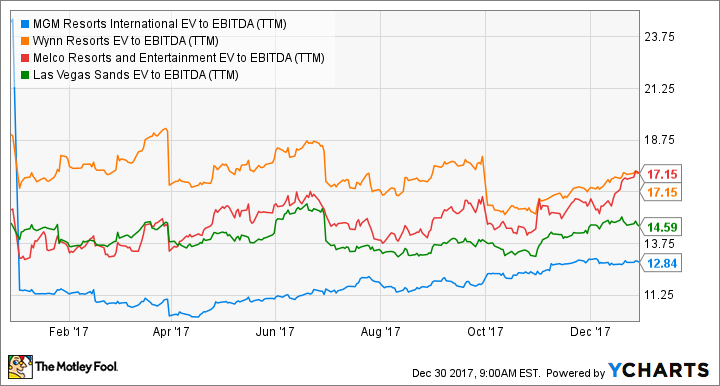 If Macau grows quickly, that will favor Wynn, Melco, or Las Vegas Sands, but I think the growth rate there may cool down from 2017's pace, and new resorts may temper the impact of what growth that does occur. MGM, on the other hand, will likely grow no matter what Macau does, and that makes its value compelling for investors in 2018.

I'm keeping my thumbs-up call on MGM Resorts on My CAPS page, and think this will be a year the stock outperforms the broader gaming market.