The pace of technological development and implementation in the last year led to double-digit revenue and profit increases for the technology industry. As a result, the sector increased 35% as measured by the Dow Jones U.S. Technology Index. Best-in-class in 2017, though, were shares of Straight Path Communications (NYSEMKT: STRP), Electro Scientific Industries (NASDAQ:ESIO), Systemax (NYSE:SYX), Universal Display (NASDAQ:OLED), and Control4 Corp (NASDAQ:CTRL). The worst-performer of this group jumped "just" 192%. 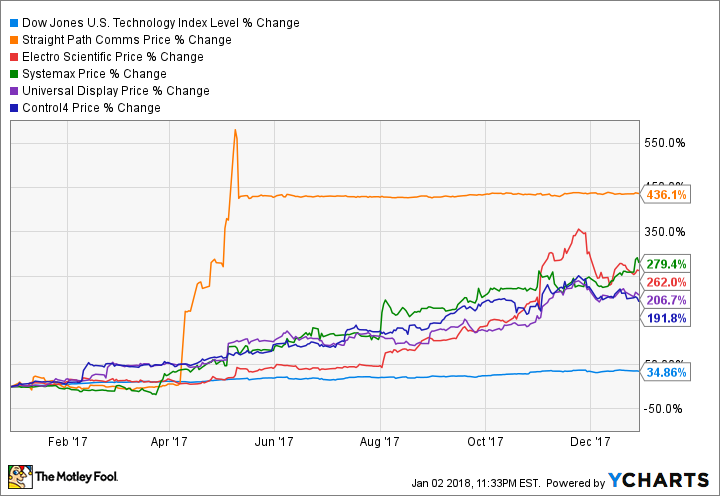 The battle for 5G heats up

Telecom companies are currently vying for 4G network supremacy, but the stage is being set for the next war over 5G. That fight made headlines in 2017 when AT&T (NYSE: T) and Verizon (NYSE: VZ) got in a bidding war over 5G network patent holder Straight Path Communications. Verizon ultimately won out, agreeing to pay $3.1 billion for the small company.

The deal represented a more than four-fold increase to share prices prior to announcements that Straight Path had suitors and the stock quickly settled to near the buyout price of $184 per share. Verizon plans on using the company's technology to speed up its development and deployment of its next-generation network. The deal is expected to close soon.

Electro Scientific, a supplier of manufacturing technology for the semiconductor industry, has been benefiting from the new boom in connected devices. During the company's last report, CEO Michael Burger had this to say:

The current manufacturing environment is as robust as I can recall in recent history, which is driving demand for products across our portfolio. Although we do not expect these business levels to continue indefinitely, we believe the underlying technology trends will drive growth in our markets over multiple years, and our new business model should allow us to improve profitability and generate consistent earnings over time.

Fiscal year-to-date, revenues have nearly doubled, helping the company return to profitability. In the current quarter, management said to expect at least a 13% and 23% increase in revenue and adjusted earnings per share, respectively, compared with the last reported quarter.

Industrial technology is growing, too

Systemax, a retailer of "white label" products and technology to industrial companies, didn't post the same impressive sales figures as other names on this list. Revenues were up 7% through the first three months of its current fiscal year. It's the bottom line, though, where the numbers really shine.

The increased sales are helping the company scale efficiently, and the results are dramatic. Operating profits are up 350%, and earnings per share are up 680%. Management said it is looking for strategic acquisitions to help the company continue to grow.

Organic light emitting diodes, or OLED, have become an important technology in today's low-power, high-definition displays. Universal Display, a leader in developing and distributing the technology, had a great year as a result. New smartphone models, TVs, and OLED lighting all contributed to the company posting a 77% rise in sales through its last-reported quarter. 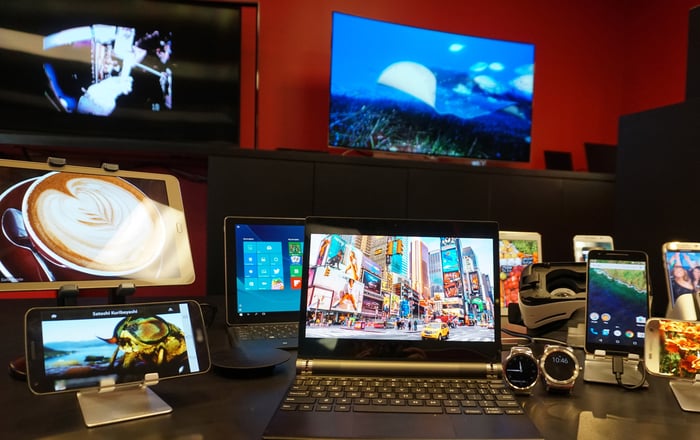 OLED technology is still in the early stages of adoption, providing plenty of room for growth in the years ahead. The company has two potential tailwinds: selling materials and products used to build OLED displays, and licensing out its technology to product partners and earning royalty revenue. Both sales models have been doing well, and are showing continued signs of positive momentum that could help Universal Display power forward.

Smart-home and networking company Control4 Corp had a knockout year as demand for the company's products have skyrocketed. More families and businesses are making connected devices like smart lighting, smart entertainment systems, and connected security a part of their home, and Control4 is reaping the benefits.

The number of dealers selling its products are up 10% and through the first three reported quarters, revenues were up 16.5% and earnings per share adjusted for things like stock-based compensation and research and development were up 51%, leading to the stock's triple-digit return last year.

Will the same stocks repeat as top performers again in 2018? Maybe, maybe not. What is likely to happen for years to come, though, are rising share prices for technology companies as technology continues to shape more and more of the world we live in. That provides plenty of reason to continue investing in technology companies that are innovating and making new customers.