It's easy for people to imagine the potential for driverless vehicles and drones as the planet zooms toward a sci-fi future. What's more difficult, for most people, is finding a way to capitalize on those trends with stocks. Here are two brilliant options for astute investors to explore: Aptiv (NYSE: APTV), for its exclusive focus on driverless-vehicle technology, and AeroVironment Inc. (NASDAQ:AVAV), for its leading drone business.

The automotive world is driving toward a future with zero crashes, zero emissions, and zero congestion. That means vehicles need to remove the human factor -- which General Motors estimates causes 94% of crashes -- electrify vehicles, and use big data to improve driving efficiency. Aptiv has recently turned itself into a top pure-play investment for autonomous driving after it spun off its legacy powertrain business to focus specifically on developing driverless technology.

Aptiv has a wide footprint with nearly 150,000 employees, and operates 106 plants and 15 technical centers in 46 countries. Its focus on developing innovative technology is important as original equipment manufacturers are willing to pay a premium to vendors, such as Aptiv, that can offer better technology to help differentiate an automaker's vehicles from the competition.

The company plans to accelerate its mergers and acquisitions to capitalize on new mobility opportunities, as well as bring in top talent in the industry. Already Aptiv is working with Intel Corp. on self-driving systems that will go on sale to automakers as early as 2019. And Aptiv acquired Cambridge, Mass-based self-driving start-up nuTonomy Inc. to accelerate the progress of its robotaxi test fleet in Singapore.

While we don't know how quickly driverless vehicles will take over the road, we do know it's going to happen one day. And when that business becomes lucrative, investors can expect Aptiv to carve out its fair share of the market.

While many households today have a drone of some kind, AeroVironment isn't exactly a household name. But that doesn't do the company justice, as its business, which revolves around the U.S. and international military markets, is doing quite well. Militaries use AeroVironment drones to provide situational awareness to their tactical operations through reconnaissance, surveillance, and communication. It's a lucrative business for the drone maker: Its revenue posted strong 14% compound annual growth between 2004 and 2017. 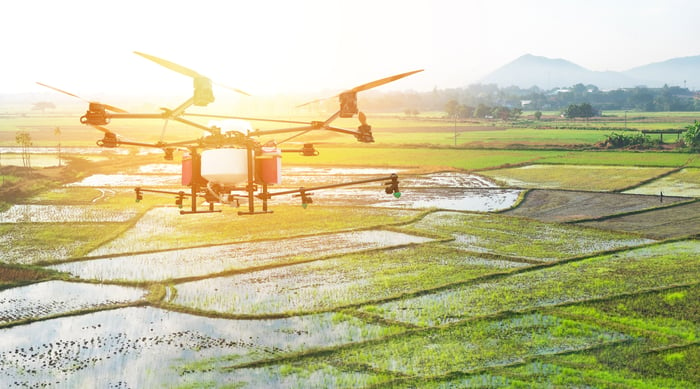 But revenue growth is just one perk for investors. AeroVironment has a strong intellectual property portfolio that drives its innovative product pipeline. Its fiscal second-quarter earnings were incredibly strong. In fact, its $0.29 earnings per share trounced analysts' estimates calling for a $0.07 loss per share, with sales checking in at $73.8 million compared to estimates of $63.9 million.

The reason the second quarter was so important is that, up until that point, many investors had felt the company wasn't living up to its potential. Its unmanned aerial segment drove the company's business as sales for the division checked in 57% higher during the second quarter and gross profit nearly doubled compared to the prior year. Even better, the company's backlog also points to a stronger near-term: Its funded backlog climbed 60% over the six months ended October. The backlog now sits at $127.1 million, which is equivalent to roughly five months of sales.

There are growth opportunities beyond the military market, and management is beginning to dive into the commercial side of the drone business -- think building construction, infrastructure inspections, and agricultural applications. In fact, the commercial drone market could be worth $21 billion and could have compound annual growth rates in the triple digits over the next five years, according to Goldman Sachs. As AeroVironment continues to capitalize on its military business and expands into commercial drone markets, its stock could be a phenomenal way to play the growing drone market opportunity.