The prognosticators and pundits were gloomy about U.S. automakers throughout 2017, but investors shouldn't ignore this particularly positive statistical trend.

After several years of steady gains in U.S. vehicle sales, it seems, based on 2017's results, that this sales cycle has plateaued. That's a result that markets have anticipated for some time, which is partly why Wall Street has overlooked shares of automakers such as Ford Motor Co. (F 3.89%) and General Motors (GM 3.07%). While 2017 was memorable for Ford and General Motors, U.S. automotive sales will likely decline -- or at best, hold essentially steady -- in 2018.

That said, automakers still have one thing going for them: Average vehicle prices keep rising. 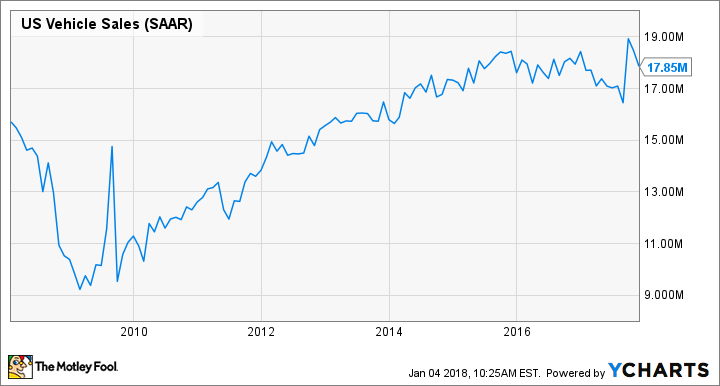 US Vehicle Sales data by YCharts.

Look at that price tag!

According to Edmunds' estimates, the average price of a new vehicle hit $36,495 in December. That was 3% higher year over year, and 13% higher than in December 2012.

"Vehicle prices have been rising all year but really hit a crescendo in December. Even though holiday bonus checks likely played a role in boosting down payments to record levels, when buyers are willing to put down more than $4,000 for a new car, it says something," said Jessica Caldwell, executive director of industry analysis at Edmunds, in a press release. "There are fewer buyers in the market right now, but those who are there are not only feeling confident, they're willing to shell out the extra cash to get a larger vehicle with all the bells and whistles. They know what they want and they are willing to accept the higher costs."

A quick glance at Detroit's sales data shows exactly what's propelling those increases: SUVs and trucks. Consider Ford's F-Series, for example: The automaker sold nearly 900,000 of its bread-and-butter trucks in 2017. In other words, 1 of every 3 Ford-brand vehicles that customers took home was a pickup hauling a hefty price tag.

And the F-Series' average transaction price hit a new record of $47,800 per truck in December, $3,400 higher than a year ago. Ford SUVs weren't far behind in sales, notching an all-time record of 796,302 units for the year. 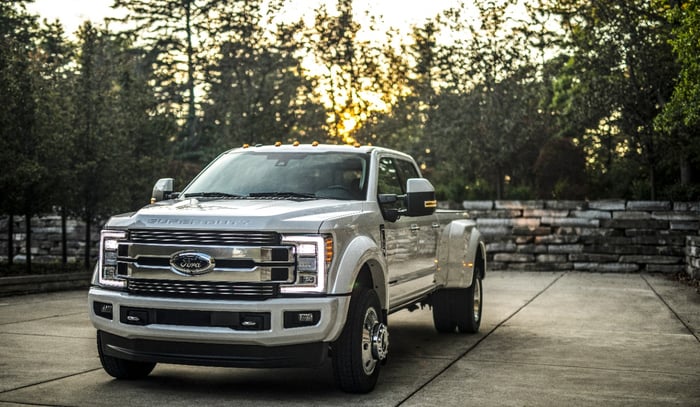 GM sold 803,807 of its Silverado and Sierra full-size trucks, and another 145,102 Colorado and Canyon midsize trucks. In addition, it also delivered 965,090 crossovers and set new annual records for pickup and crossover sales. Based on retail market share, Chevrolet was the fastest-growing crossover brand in 2017, and crossovers now account for more than 80% of Buick's retail deliveries. All of those factors helped push GM's average transaction price -- net of incentives -- to more than $38,000 in December and $35,400 for the year.

It's going to be tough for Detroit automakers to grow sales in 2018. One key factor investors should keep an eye on is whether the companies will be able to roll out fresh vehicles -- which hold market share and pricing better -- while also keeping costs down. If they can do both, it would go a long way toward proving how far they have come from the automakers they were before the financial crisis. If nothing else, though, at least they still have strong pricing going for them as we start this new year.