If you only noticed the shocking sales forecast Gilead Sciences Inc. (NASDAQ:GILD) dropped on investors' heads last October, you'd hardly call 2017 a banner year. We had been expecting hepatitis treatment sales to slide, but the guidance bomb management unloaded during its third-quarter earnings report was a real doozy. Highlights included an expected 40% sequential drop in hepatitis C treatment sales from the third quarter to the fourth.

How did Gilead Sciences shareholders finish 2017 ahead despite a doomsday scenario prediction for a franchise that was the company's leading revenue generator in 2016? Let's look at a few major events that will help markets forget about hepatitis C losses and remember 2017 as the first chapter in the next act of this biotech's growth story. 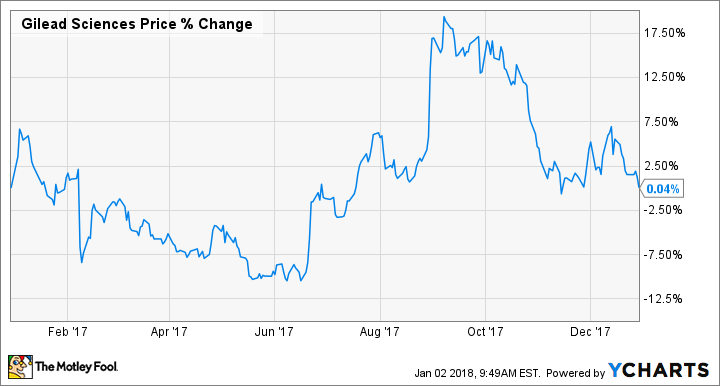 It seemed like investors began clamoring for another transformative acquisition the moment Gilead's next-generation hepatitis C drugs began generating boatloads of cash. The company granted this wish in spectacular fashion over the summer. In the years to come, there's a good chance we'll remember the $11.9 billion acquisition of Kite Pharma, and its stable of experimental chimeric antigen receptor T-cell (CAR-T) therapies, as the first step in this company's return to growth.

CAR-T therapies are basically IV bags full of a patient's own immune cells that have been modified to recognize and kill cancer cells. Manufacturing and delivering such a bizarre product presents immense challenges, but the results are well worth the effort and a list price of around $373,000 for a single infusion.

Age-old chemotherapies are cheap but often ineffective. Once you factor in their infamous side effects, frequent trips to treatment centers, hospitalizations, and so on, they lose their luster. In stark contrast, a stunning 40% of patients with an aggressive form of lymphoma in advanced stages were disease-free more than a year after receiving a single dose of Gilead's new CAR-T therapy, Yescarta. Efficiency might be a word seldom associated with healthcare in America, but I think this value proposition will eventually drive annual sales of Yescarta above $3 billion at its peak.

Gilead has long been a market leader of HIV antivirals, but right now one of the more popular HIV treatment regimens involves mixing Gilead's Descovy with Tivicay from partners GlaxoSmithKline (NYSE:GSK) and Pfizer (NYSE:PFE). In mid-2017, Gilead proved a fixed dose combination of Descovy plus bictegravir was non-inferior to a Tivicay containing regimen in terms of efficacy and tolerability.

Healthcare analytics service provider Evaluate Pharma thinks the single-tablet regimen will be the most successful drug launch of 2018, with annual sales passing a highly memorable $5.05 billion by 2022. Of course, the HIV treatment needs to earn an approval first. An application for Gilead's bictegravir-containing regimen is under a priority review, and the Food and Drug Administration is expected to announce a decision just in time for Valentine's Day.

It looks like Gilead Sciences shareholders, myself included, could be in line for some unforgettable cash distribution. As of November 2017, $30.8 billion of the company's $36.6 billion cash balance was held offshore. Under the new tax law, U.S. businesses can repatriate overseas assets at a 15.5% rate or just 8% for non-liquid assets.

The 15.5% rate is much higher than most of us had been expecting, but it's also a lot less than the 35% rate Gilead would have incurred under the previous law. Management hasn't told anyone what it plans to do with the $30.8 billion held offshore, but we can dream. Repatriating $30.8 billion at a 15.5% tax rate would leave the company with enough cash in the U.S. to distribute a whopping $19.93 per share. 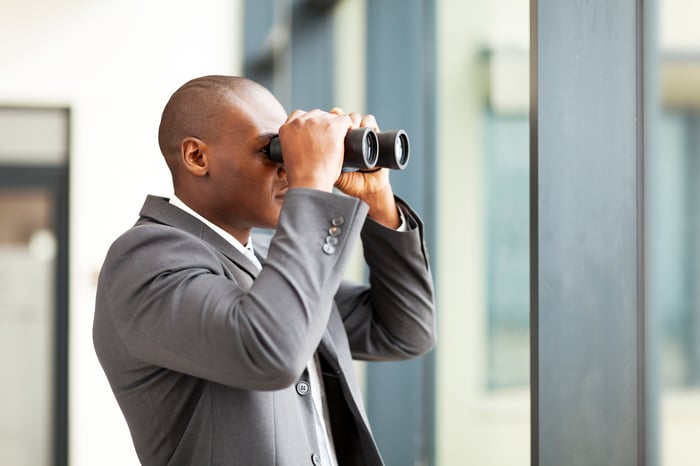 It would be naive to hope for such a big present just after the holidays, but I wouldn't be surprised if most of Gilead's overseas cash pile ends up in shareholders' pockets over the long run. Gilead Sciences is famously friendly toward its shareholders. In 2016 alone, the company returned a combined $13.5 billion to in the form of dividends and share buybacks.

While a look at 2017's highlights paints a rosy picture for Gilead going forward, there's still no guarantee that the $11.9 billion acquisition of Kite Pharma will ever generate a return. The initial rollout of Yescarta has been painfully slow, with just five patients receiving the treatment in the first two months of its commercial launch. All eyes will be on Gilead's fourth-quarter report for signs that Yescarta can put up sales figures as impressive as the clinical benefit it delivers.