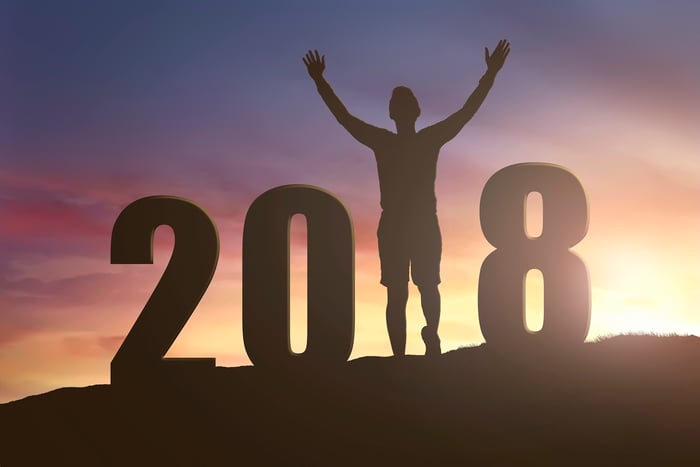 For Achaogen shareholders, 2017 was a year to forget. The stock fell nearly 18%. Earlier in the year, though, Achaogen ranked as one of the best-performing biotech stocks favored by billionaire investors with its share price more than doubling.

Better days could be just around the corner for the biotech. Achaogen submitted a New Drug Application (NDA) to the Food and Drug Administration for antibiotic plazomicin in October. The FDA recently granted priority review status for the submission. An approval decision is expected by June 25, 2018.

Plazomicin targets treatment of multidrug-resistant Enterobacteriaceae bacterial infections. Patients with these infections in their bloodstreams or urinary tracts currently have limited or no treatment options available. There are at least 70,000 such patients in the U.S. diagnosed annually -- and that number is projected to double within five years. Market research firm EvaluatePharma estimates that plazomicin could generate sales of $313 million by 2022.

Rigel Pharmaceuticals enjoyed a banner year in 2017, with the stock soaring 63%. Most of that gain came in early October, after the company announced that the FDA wasn't planning on an independent advisory committee meeting to discuss the NDA for Tavalisse, formerly known as fostamatinib. The FDA is scheduled to make an approval decision on Tavalisse in treating immune thrombocytopenia (ITP) by April 17, 2018.

What are the odds that the drug gets a green light? My hunch is they're pretty good. Tavalisse didn't meet its primary endpoint of stable platelet response in the second of two late-stage clinical studies. However, the reason why was that one patient on placebo reached stable platelet response. Combining data from both late-stage studies, Tavalisse did show statistically significant benefit. The FDA's decision to skip an advisory committee meeting could hint that the mixed results won't be an issue.

ITP is a disease where the immune system attacks and destroys the body's own blood platelets. The disease affects around 65,000 patients in the U.S. Although there are some therapies available, there's still a significant unmet need as many ITP patients respond well to current treatments. Rigel is also evaluating Tavalisse in treating two other rare blood disorders. EvaluatePharma projects that sales for the drug could total $287 million by 2022, if approved.

Tetraphase Pharmaceuticals stock tanked in both 2015 and 2016. However, 2017 was a different story: The biotech's share price jumped 56% last year. The gain would have been even higher were it not for Tetraphase's $60 million stock offering in July that diluted the value of existing shares.

Like Achaogen, Tetraphase focuses on developing new antibiotics to treat multidrug-resistant infections. In August 2017, the company filed for European approval of intravenous eravacycline for treating complicated intra-abdominal infections. A decision is expected later this year. Tetraphase also completed its FDA submission for IV eravacycline a few days ago. Assuming the NDA is accepted by the FDA, the drug could win U.S. approval by fourth quarter 2018.

Tetraphase reported positive results from two late-stage studies of IV eravacycline. However, the antibiotic also failed to meet the primary endpoint in a late-stage study back in 2015. My prediction, though, is that Tetraphase will win approval for the drug later this year. There is a considerable need for newer antibiotics, as bacteria develop resistance to older drugs. If IV eravacycline does win approval, Tetraphase should have a solid market opportunity. EvaluatePharma estimates the drug could reach sales of $237 million by 2022.

These three biotechs have a couple of things in common. All three could win approval for new drugs this year. And none of them have drugs already on the market. But which is the best bet for investors?

My view is to look at the ratios between the companies' current market caps and sales estimates for each lead product. Using this approach gives Tetraphase the most attractive valuation based on sales potential. However, Achaogen isn't too far behind. Of course, this requires some big assumptions -- namely that the drugs have similar chances of approval and that the sales estimates are relatively accurate. I'm comfortable with those assumptions, though, and think that Tetraphase gets the nod as the best pick right now.