For the most part, I consider bitcoin, other cryptocurrencies, and most stocks that are tied to them as speculative investments, or even as outright gambling. So it shouldn't be a surprise that as a long-term investor, I would stay away from most bitcoin stocks. However, some perfectly good businesses are starting to embrace bitcoin as a complement to their existing business, and some of these could be smart investments.

With that in mind, here are two bitcoin stocks you'll never find in my portfolio, and one that I would consider buying. 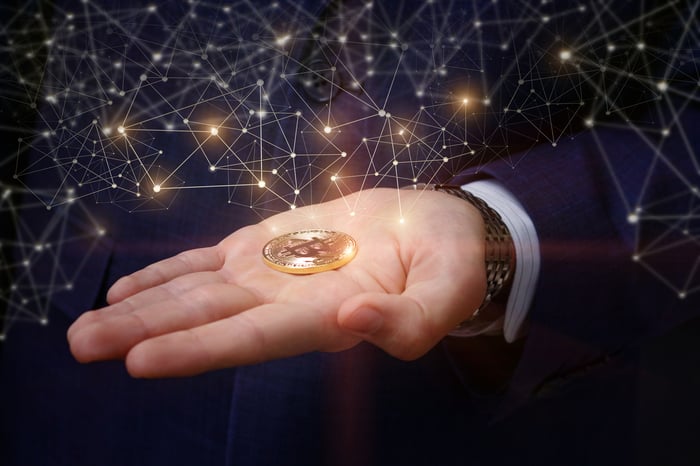 If you want to buy bitcoin, just buy the currency itself

To be perfectly clear, I'm not suggesting that anyone should own bitcoin as a long-term investment. The cryptocurrency market is the Wild West at this stage, and bitcoin could conceivably be worth $1 million, $0, or anything in between, depending on what happens in the next several years.

Having said that, buying bitcoin directly on an exchange is certainly a better idea than buying the Bitcoin Investment Trust (OTC:GBTC), which essentially pools investor money and buys bitcoin with it. Think of the business model as a "bitcoin mutual fund."

The problem is that the fund trades for a hefty premium over the value of the bitcoins it owns. As my colleague Jordan Wathen recently wrote, the fund owns roughly 0.092 bitcoins for every share, so the price should theoretically correspond to 0.092 times the current price of a bitcoin.

Well, as of this writing, one bitcoin trades for $16,400, which implies that each share of the fund should be worth about $1,509. However, the Bitcoin Investment Trust trades for $2,344 per share, a 56% premium. Why would you willingly pay $2,344 for something that you could buy for $1,500 with just a little extra effort? This is why I say that people who want to own bitcoin are better off simply creating an account at a bitcoin exchange and buying the digital currency itself.

From biotech to bitcoins

On Oct. 4, 2017 (roughly three months ago), struggling biotech company BiOptix changed its name to Riot Blockchain (NASDAQ:RIOT) and decided to switch its investment focus to bitcoin and blockchain-related investments.

So far, the company has indeed made a few blockchain-related investments. It purchased a minority stake in Canadian cryptocurrency exchange Coinsquare and acquired a company called Kairos Global Technology, a cryptocurrency mining company whose assets include about 1,200 pieces of mining hardware. It also bought a 52% stake in Tess, Inc., which is developing a payment service for the telecom industry, based on blockchain technology.

However, there have been some red flags. Riot generally doesn't disclose some pretty important information in its press releases. For example, it was announced that Coinsquare had received another investment at more than three times the valuation Riot paid, but no additional terms were disclosed, nor did the company say who this investor was. And just recently, it was announced that Riot's CEO sold more than 30,000 shares, pocketing about $869,000 in the process.

Simply put, this is a speculative company whose stock price seems to rise and fall along with bitcoin. The company has made certain blockchain-related investments, but too much is unknown at this point, and it's impossible to gauge the value of the operation with any level of accuracy.

A valuable partnership could catapult this financial firm higher

Here's the type of "bitcoin stock" I could potentially get behind. Siebert Financial (NASDAQ:SIEB), which offers discount brokerage services through its subsidiary Muriel Siebert & Co., recently announced that it plans to offer deeply discounted brokerage services through a partnership with Overstock.com. The service will offer $2.99 stock trades ($1.99 for Club O members) and is expected to launch by the end of the first quarter.

Just a couple of days later, Overstock's blockchain subsidiary, tZero, announced that it was acquiring a small stake in Seibert, which indicates the possibility that discounted cryptocurrency trading could be offered through the platform as well.

To be clear, I'd wait for a little while to get in, as I'm convinced that some of the recent pop was simply due to having the word "blockchain" in a press release. However, Siebert is an example of a real and established business that doesn't need bitcoin to survive. Offering stock trades that undercut pretty much every competitor through Overstock's platform could be a major win for this half-century-old firm.

The bottom line on bitcoin stocks

If you couldn't tell, my general thought when it comes to bitcoin, other cryptocurrencies, or stocks whose businesses are highly or completely dependent on digital currencies is "stay away." Having said that, if an otherwise excellent business is embracing the surging popularity in bitcoin and other cryptocurrencies as an additional revenue generator, like Siebert is, it could be a good investment. Just make sure the business fundamentals justify the price you pay.