The Walt Disney Company (NYSE:DIS) is facing a dilemma. On one hand, its ESPN sports network has seen better days. After years of raising subscriber costs to pay ever-increasing sports-rights fees, many cable subscribers have started to request packages without the expensive channel. In the last seven years, the company has lost roughly 13% of its total subscribers.

On the other hand, Disney's movie studios have kicked into high gear. CEO Bob Iger wisely acquired Pixar from Steve Jobs in 2006, Marvel Entertainment in 2009, and Lucasfilm from George Lucas in 2012, churning out a string of blockbuster successes that have helped to offset weakness in the company's media-networks division. 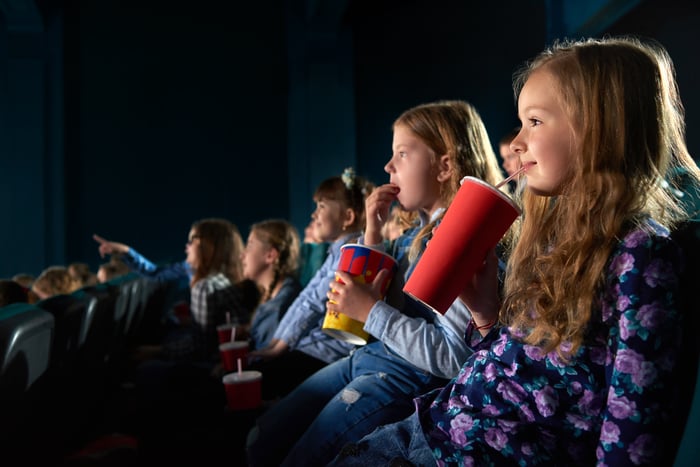 As ESPN continues to struggle with high sports costs, the loser here could be competing movie studios that will continue to compete against Disney's studio juggernaut.

Overall, a weak year for movies, but a good run for Disney

Last year wasn't great for the overall movie industry. According to Box Office Mojo, the domestic gross in 2017 was $11.07 billion. This figure was 3% and 1% lower than both 2016's and 2015's total. Total tickets sold, a better proxy that removes ticket inflation, are at the lowest levels since 1992, when the U.S. population was 20% lower.

However, it's been a good run for Buena Vista, Disney's host of movie studios. Since 2009, the year Disney purchased Marvel, Buena Vista has seen its domestic box-office market share go from 11.5% to 21.2%. With one exception -- Universal Studios in 2015 -- no other studio has eclipsed 20% market share. In 2016, more than one in every four dollars of domestic box-office gross went to Walt Disney.

Smaller studios and actors could lose out

In the short run, the number of theaters, viewings, and screens are relatively inelastic. Therefore, a theater's "choice" of whether to use its screen to show a Marvel, Lucasfilm, or Pixar blockbuster, and on multiple screens, versus a movie with a smaller production (and marketing) budget is anything but a choice. The losers here could be the entire movie ecosystem -- anyone not named Disney. Particularly affected will be smaller, independent studios and projects that will be shelved instead of receiving the green light.

Another effect will be the diminishing importance of "star power." Disney's films are either animated, or are story-based, and these rely less on an actor or actress to sell tickets. While not a Disney film, a prime example is Sony's Spiderman series: The 2017 release, Spider Man: Homecoming, will star Tom Holland as Spiderman, the third actor to play the role in a decade.

Look for Disney to dominate the box office

There are two reasons why Disney should continue to earn outsized market share for domestic ticket sales. The first is that ESPN's morass will continue. In November, the company cut 100 employees, its third round of cuts since 2015. Still, the biggest cost for ESPN isn't internal -- it's the cost to televise NFL, NCAA, NBA, and MLB games. As these costs continue to climb and network subscribers continue to fall, look for Disney to continue to lean more heavily on its movie division.

The second is Disney's purchase of the 20th Century Fox studio via its 21st Century Fox (NASDAQ:FOXA) asset acquisition. Disney has most of the rights to its studio and the host of Marvel characters it did not have prior to the deal -- X-Men, The Fantastic Four, and Deadpool, among others.

Disney was slated to release approximately 11 movies this year, and 20th Century Fox was slated to release 15. Look for that to increase as Disney seeks to monetize this asset, and more Marvel crossovers are added to the fold. Disney will continue to churn out hits and grow studio revenue, but watch for saturation and for other studios to be more cautious in their future releases.