Buckingham analyst Chris Brendler launched coverage of Square on Thursday with a "buy" rating. He's encouraged by Square's role as a unique tech disruptor with a dominant role in small and midwize businesses payment processing. Brendler also sees Square's high-margin software solutions starting to scale, arguing that we're still in the early innings of the global opportunity. He's slapping a $42 price target on the stock, but the stock's nearly 19% surge finds it just 2% away from Brendler's goal. 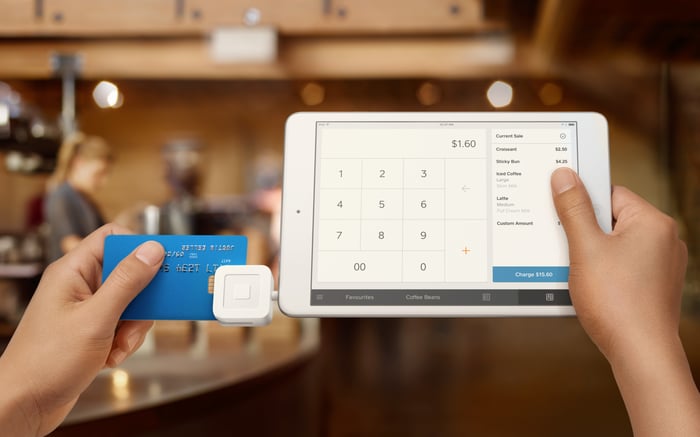 Investors have been feasting on Square since it went public at $9 in late 2015, though the path to the four-bagger the stock has become didn't begin in earnest until last year, when the stock exploded on the strength of four blowout quarters. Revenue growth itself will continue to decelerate for all of 2017 -- the way it has every year -- but that may not be the case come 2018. Top-line gains have accelerated sequentially in each of the first three quarters of 2017, and Wall Street pros see the new year as its first year as a public company with headier revenue growth than the year before.

The news has been even better on the bottom line. Square wasn't an earnings growth story when it hit the market a little more than two years ago, but it's been beating analyst bottom-line targets by at least 40% every three months over the past year. Square turned the corner of profitability sooner than Wall Street was expecting, and it's now been in the black for the past three quarters.

Momentum is on Square's side. Gross merchandise volume for its latest quarter rose 31%, and most of that growth is coming from some of its larger midsize merchants. Square also boosted its guidance, a good look in any scenario. Moreover, Square became a cryptocurrency play late last year, as it updated its Square Cash app to allow limited bitcoin trading. Square as a bitcoin play has been a factor in its recent gains, but the stock had already more than doubled in 2017 before the company hopped on that bandwagon.

Brendler's initiation is certainly a sign that at least one analyst doesn't think it's too late to hop on the stock. Big winners in any given year don't usually repeat the following year, but Square seems to be picking up in 2018 just where 2017 left off.