We're in almost unprecedented territory. In the past 15 years, the S&P 500 has generated positive returns in all but one year. That down year was 2008, a year that's now a faint memory for many investors today.

That stocks have gone up with regularity isn't necessarily a sign they must soon fall, but rather a reminder that making money hasn't historically been this easy. Now is a good time to re-examine your asset allocation so that you can afford to stay in the market through the ups and downs. 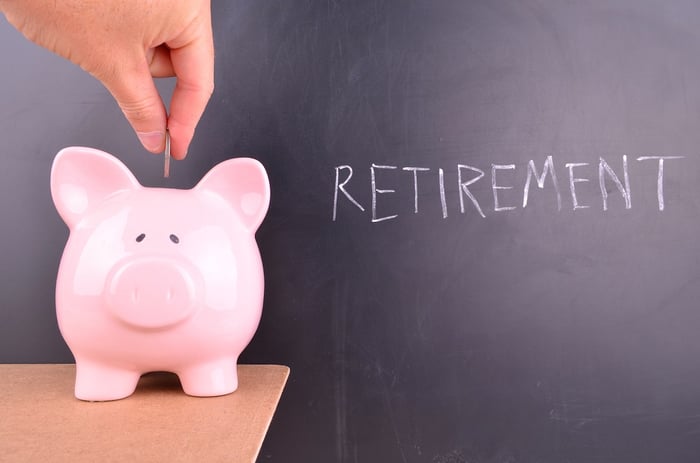 The danger of "average" results

Since 1928, the S&P 500 returned an average of about 9.7% per year. But the road to these high returns was turbulent, just as it will always be. Stocks go up and down, making them fit only for money that you can keep in the market for years at a time.

One of the reasons stocks are generally expected to return more than safe assets like bank CDs or bonds is precisely because stocks are volatile. If stocks weren't so volatile, people would keep all of their money in stocks all the time and returns would necessarily decline as a result.

Though a long-term chart of the S&P 500 may go up and to the right, the following chart shows how much stock market returns can vary from year to year. 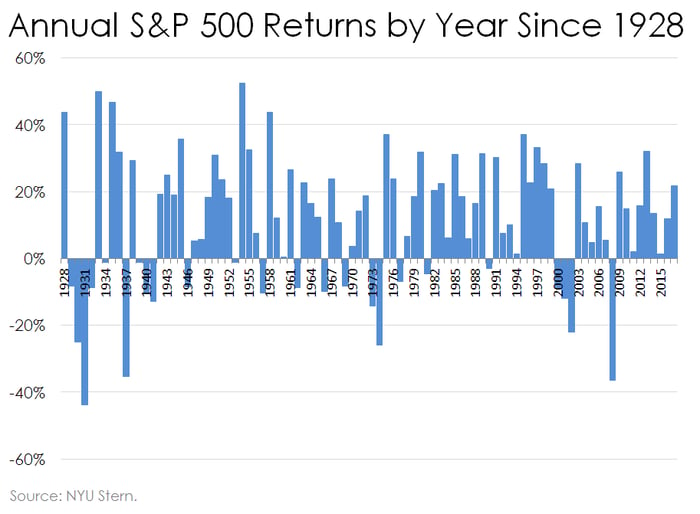 Stocks declined in 24 out of the past 90 years. And just when it seems as if bull markets will never end, a bear market comes along. Often, long periods of high returns are met with long periods of negative returns. After the tech bubble burst, stocks dropped for three years straight, logging a negative return in 2000, 2001, and 2002.

Being smart about your portfolio

In bull markets, it's easy to forget about the bear markets, and how miserable investing can be when stocks go down, not up, for years in a row. That's why it's important to allocate your portfolio so that you can stay level-headed and avoid the temptation to sell when the inevitable bear market comes along.

In his book The Intelligent Asset Allocator, William Bernstein laid out a simple table for investors to use to determine how to allocate their investment portfolios based on how much they can afford to lose without panicking. Here's a reproduction of that table:

The way to read this table is that if you can only stomach a 20% decline in your portfolio, you should invest only about 50% of your portfolio in stocks. Based on historical data, that seems reasonable enough.

The problem is that rational thinking about asset allocation goes out the window when stocks rise or fall sharply. You may recall that after the market had already dropped 35% from the peak in 2008, a panicked Jim Cramer went on the Today show to tell investors to cash out all the money they would need in the next five years. An article on BusinessInsider.com provides a transcript of the exchange. It really encapsulates the widespread fear in the fall of 2008.

I don't mean to pick on Cramer. His basic message was right: Money you may need in the next five years should never be in stocks. But the right time to think about your asset allocation is all the time, not just when stocks are in freefall.

If you sold your stocks when Cramer appeared on TV in October 2008, you would have avoided further declines, but the losses were only temporary. Less than one year later, the S&P 500 was already trading at a higher level than where Cramer advised cashing out. It's likely that many who pressed the panic button didn't get back in until years later, but those who simply followed their asset allocation plans made out like bandits, as they would have rebalanced their portfolios near the bottom, selling their appreciated bonds to buy beaten-down stocks, while still sleeping well at night.

After nine years of rising stock prices, investors should very carefully re-examine their asset allocation. Your stock investments have probably risen in value far faster than your bond investments, leaving you with more stock exposure than you may realize. Having too much money in stocks is a good problem to have when stocks are soaring, but it can lead to disastrous results when stocks fall.