Every investor has their own preferences about how to pick stocks, and occasionally, you may find that your axioms put one or two companies into the "never buy" category. Two that fall into that class for me are Snap Inc. (NYSE:SNAP) and Fitbit (NYSE:FIT). It's not that these companies are horrible, or that they don't have some potential. Rather, it's that I don't think they have what it takes to fend off their competition over the long term. 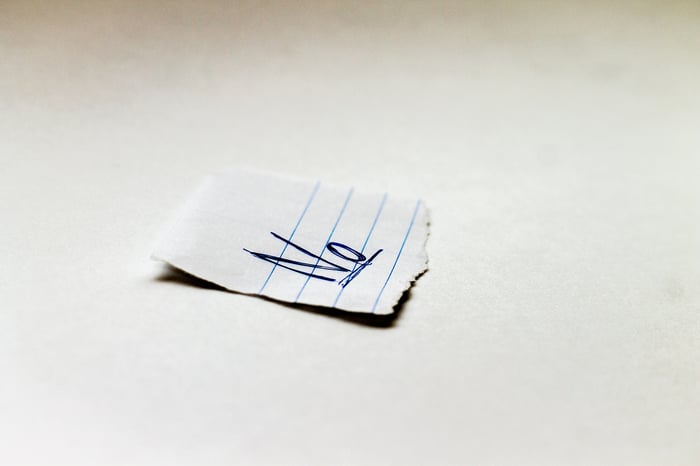 The case against Snap Inc.

Snap went public in mid-2017 with much fanfare, but investors' excitement soon turned to dread. The company's share price tumbled when it became clear that, despite spending tons of money, its growth isn't keeping pace with that of its rivals.

Specifically, the social messaging features on its app are being easily replicated. For example. one of Snapchat's core features is Stories, which lets users take video and images of themselves throughout the day and share them in serially for their friends to view.

Facebook's (NASDAQ:FB) added a near clone of Stories to its Instagram app last year, and it's become a huge success. The number of Instagram Stories users now surpasses Snapchat's monthly active user figure.

That should be unsettling for Snap investors; if uber-popular Instagram can simply replicate anything Snap does to differentiate itself, how can the smaller social media company ever create an economic moat? I don't think it can.

To make matters worse, Snap is already burning through cash just to keep up in the social space, and its user growth fell short of the company's own expectations in the third quarter. Daily active users hit 178 million, but Snap's management had been expecting about 182 million.

Perhaps that's why Snap's share price is down about 40% since it went public. The company could certainly develop some killer features for Snapchat in the future, but I think Facebook's size -- and the fact it has seemingly put a target on Snapchat's back -- justifies my decision to never touch this stock.

Fitbit has been a leader in wearable technology for years, but since its IPO back in 2015, its shares have plummeted 80%. That stock price drop isn't Fitbit's biggest problem though; it's the fact that it's getting boxed in by its competitors that makes me want to leave this stock alone.

Last year, Strategy Analytics' data showed that the China-based Xiaomi sold more wearable devices than Fitbit, and that Fitbit's market share had fallen by 10 percentage points in just one year. The drop came not only because Xiaomi's sales jumped, but also because Fitbit's sales sank 40% year over year. That left the company in the No. 2 spot among wearables vendors, with Apple (NASDAQ:AAPL) on the rise and hot on its heels in third place.

The bad news gets worse when you consider that Fitbit's latest strategy revolves around its new high-end smartwatch, called the Ionic, which costs just $30 less than the Apple Watch. Now, you can call me a pessimist if you want to, but I think those two situations add up to a disaster for Fibit.

The company can't chase after the low-end wearable segment against Xiaomi because the margins are too thin, and I don't think it can take on Apple at the high end because Apple's Watch has more features, better quality, and a far superior app ecosystem. For those reasons, you'll never find Fitbit on my buy list.

Things could change of course

I'm too much of realist not to admit that something could change with these companies in the future that could put them in much more competitive positions. But as matters stand right now, I don't think either company can generate enough of a competitive advantage to overtake its main rivals. Snap would have to create a feature for Snapchat that Facebook can't replicate, and Fitbit would have to create a wearable device that's better than Apple's -- and the chances of either of those things happening are just too thin.