Last week, Strategy Analytics reported that Xiaomi shipped more wearable tech devices (like fitness bands) in the second quarter of this year than both Apple (NASDAQ:AAPL) and Fitbit (NYSE:FIT). The China-based company now holds 17% of the global wearables market share, surpassing Apple and Fitbit for the first time ever.

Global wearables shipments grew by about 8% year over year in the quarter, but while Xiaomi and Apple both improved their shipment numbers dramatically, Fitbit's spiraled down. It wasn't all that long ago that Fitbit dominated the wearables tech space, but the company is losing its footing in the lower-end market and will face massive competition later this year when it releases its new smartwatch. 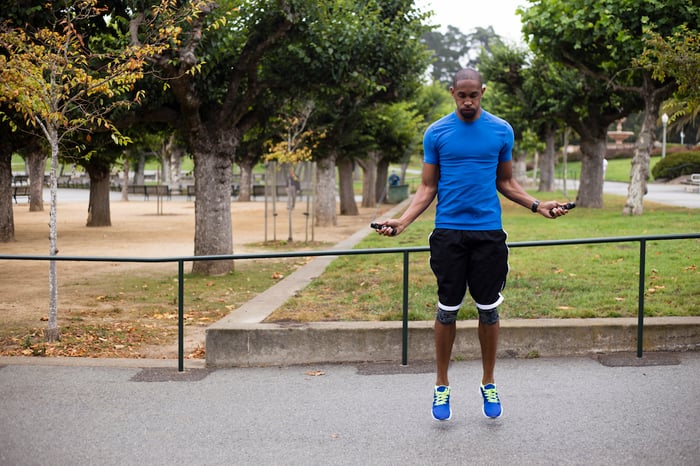 The news isn't all bad for Apple. The company has always taken a slow and steady approach with its products, and typically doesn't care much about market share. Additionally, the Apple Watch isn't a big money maker for the company. Apple's "other products" category, which includes the Apple Watch, Apple TV, Beats headphones and other accessories, accounted for just 6% of the company's total revenue in the third-quarter.

The good news for Apple is that Strategy Analytics said that strong demand for premium smartwatches actually helped drive up shipments in the second quarter. Apple may have lost out to Xiaomi for market share, but the company still shipped 55% more Apple Watches in the second quarter than it did the same time last year, according to Strategy Analytics.

Xiaomi's growth, on the other hand, came from increasing demand for low-cost fitness trackers (like the company's Mi Bands) in China, which is Xiaomi's home country. The devices come with a heart rate sensor, step counter and even calendar alerts, and start at a price of just $15.

While Xiaomi leapfrogged both Apple and Fitbit for the first time, the real loser in the quarter was Fitbit. The company saw its market share get cut nearly in half in just a year, from 26% down to 16%.

Strategy Analytics' executive director, Neil Mawston, warned in a press release that "Fitbit is at risk of being trapped in a pincer movement between the low-end fitness bands sold by Xiaomi and the fitness-led, high-end smartwatches sold by Apple."

Fitbit is just coming off a stronger-than-expected second quarter that beat analysts' consensus estimates for both revenue and earnings. Revenue fell by nearly 40% year over year to $353 million, but were $12 million higher than the average estimate. Meanwhile, Fitbit posted non-GAAP earnings per share loss of $0.08, which beat the consensus estimate of $0.15.

That helped push the company's share price up in the short term, but I have my doubts about the company's long term outlook. Fitbit is getting squeezed on the low-end by cheap fitness trackers, and it's now looking to launch a new smartwatch to expand its business. That may seem like a logical move, but it could prove very difficult to pull off as the company tries to take on Apple's smartwatch.

Earlier this year Apple held about half of all smartwatch market share, which makes Fitbit's smartwatch play an uphill battle against Apple. Additionally, Apple CEO Tim Cook said on the company's third-quarter earnings call that Apple Watch sales increased by 50% in the quarter.

I think it's a risky bet to think that Fitbit could take on the Apple Watch in any meaningful way at this point. Coming up against Apple in the high-end smartwatch market seems like an insurmountable task, and Fitbit investors should be a little concerned that the company's prospects in both the low-end and high-end wearable markets are looking a bit unstable.